Emerging domestic natural gas and helium producer Renergen is pleased to update investors on the progress of its current drilling operations at its Virginia Gas Project. Since the announcement on 17 December 2019 of strong gas flows with high (up to 12%) helium, drilling and other technical issues have necessitated significant changes from the original horizontal well design. The sections penetrated by several side-tracks have provided valuable encouraging data for future development drilling.

The key learnings from the drilling are as follows…

The building of a helium plant planned for the Consul area is expected to create between 50 and 100 jobs. North American Helium Inc., the company behind the project, said it will look to hire locally – and that includes Maple Creek. “We would prefer local people, absolutely,” said Vance Blydo, vice-president of operations, last Friday. “We are looking forward to a partnership with the local community.” NAH plans to build a helium purification plant on farmland near Consul. Blydo, a professional engineer with 25 years of operational experience in the oil & gas industry in Western Canada, said NAH had not yet made a “final investment decision” on the project. Details such as the design of the plant had still to be finalized. He believed this decision would be made in the next two to six months. Construction would probably take one to two years to complete, he said. Last October, Blydo was one of two NAH representatives to meet about 24 people at Consul Hall for a public information session. The other representative was Donna Bowles, vice-president of land & government relations. The public heard that NAH was the most active driller of helium wells worldwide. Four wells in the area would tie into the proposed Battle Creek helium recovery plant south of Consul. The plan was for civil and pipeline building to be undertaken in the latter half of 2020, with plant delivery and construction slated for the second quarter of 2021. If everything went according to plan, the plant would be on-stream by the third quarter, the meeting heard. The idea was to transport the gas to market, one load per day, using a fleet of six to eight trucks. Helium cannot be stored, so it has to be hauled to where it can be processed. It is likely the gas will be shipped to the nearest liquefaction plants in Colorado, Kansas and Wyoming. In liquid form, helium can be placed in a container and marketed globally. A big hope of NAH is to build a liquefaction plant in southwest Saskatchewan. The helium in this area is detectable 2,500-2,800 metres below the surface. NAH is interested in reservoirs of helium-bearing inert nitrogen carrier gas that does not hold hydrogen sulphide, water or hydrocarbon gas liquids, which makes it easier to purify to nearly 100 per cent for market sales. Other gases discovered with the helium are safely vented into the air. Blydo said the information session had been a success. “The plan was well-received,” he said. “The local community is very excited about it. We are looking forward to being partners and having a good relationship.” He added the plant was expected to have a 10-year to 20-year life. The Consul project follows a period of exploratory drilling by NAH in the region. It has long been known that Saskatchewan is a source for helium. Oil and gas companies found helium during exploration in the 1950s and Battle Creek was one of the areas identified; the others were Wilhelm and Mankota. In the 1960s and 1970s, there was helium production in the province, but the market crashed after prices dropped in the late 1970s. Recently, prices and demand for helium have been rising again.

Forum in Swift Current Will Put Spotlight on Helium Industry

Oil and gas exploration and production company Big Star Energy (BNL) has announced the acquisition of an additional 17,612 gross (12,912 net) acres in Colorado, USA. Big Star now holds multiple high-value helium projects in North America — with a total lease position of 110,055 gross acres. The additional acreage was secured by 22 new leases won at the February State land auction and 8 new leases from private mineral owners.
Big Star Managing Director, Joanne Kendrick, commented “I’m delighted by our success at the recent state auction where we saw an increase in competition for leases, supporting our opinion of the prospectivity in the area and specifically at the Enterprise location. “Our leasing program will continue this quarter with a focus on increasing net acreage over key prospects. At the same time, we are working on well location selection, drilling planning and prospective resource estimation.” The Company has leased acreage covering a total of 15 soil gas sample locations which returned helium readings significantly above atmospheric concentrations. Helium is a unique industrial gas that exhibits characteristics both of a bulk, commodity gas and a high-value specialty gas. It’s considered a “high tech” strategic element. Due to its unique chemical and physical qualities, helium is a vital element in the manufacture of MRIs and semiconductors among other high-tech applications. There is no way of manufacturing helium artificially and most of the world’s reserves have been derived as a byproduct of the extraction of natural hydrocarbon gas.

A working meeting between Alexey Miller, Chairman of the Gazprom Management Committee, and Sergey Chemezov, Director General of the state-owned Rostec Corporation, took place last week in Moscow. The meeting participants reviewed the potential areas of cooperation between Gazprom and Rostec enterprises, including the transportation of liquid helium from the Amur Gas Processing Plant for the purpose of exporting it via the Logistics Center in the Primorye Territory. Gazprom Gazenergoset Geliy, the company authorized to implement the Helium Tank Logistics Center investment project, plans to purchase gas-powered vehicles to transport liquid helium. To that end, freight trucks powered by liquefied natural gas will be used. Batch production of these trucks will be carried out at the facilities of KAMAZ. The infrastructure for producing LNG and refueling these trucks will be set up by Gazprom Gazomotornoye Toplivo. As a follow-up to the Agreement, Gazprom Gazenergoset Geliy and KAMAZ signed an Action Plan. The first 18 LNG-powered trucks that will transport helium in special thermally-insulated containers are expected to be delivered in 2021. The parties intend to join forces in order to, inter alia, create a standardized 25 MW gas compressor unit and new modifications of gas turbine engines, launch the manufacture of LNG storage, transportation and loading equipment, and design modular power plants with diesel and gas-fueled reciprocating engines. The parties will also cooperate to expand the uses of composite materials and other state-of-the-art structural materials, to promote the application of digital technologies, and to deal with the challenges of technological development and import substitution. 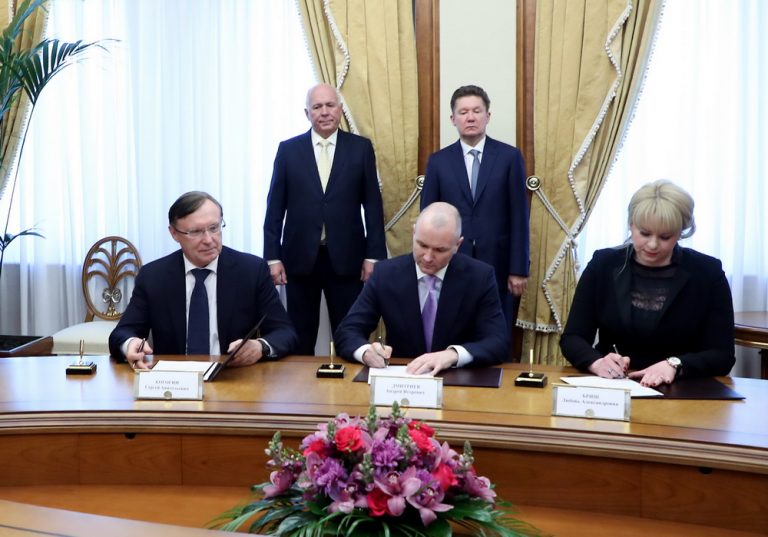