We’ve told you about unconventional wind turbines that can be situated between buildings or float offshore in the ocean. Now a company spun off from Massachusetts Institute of Technology research has designed a helium-filled wind turbine that floats 1,000 feet in the air to harvest high-altitude wind energy, which can provide a significant amount of electricity. Altaeros Energies was founded in 2010 at MIT by then graduate students Ben Glass and Adam Rein with the goal to offer the first commercial turbine capable of harnessing high-altitude wind at a low cost, Ryan Holy, Altaeros’ business development manager, told Design News. After MIT, Glass went on to an internship at SpaceX, where he gained experience designing an array of turbines and leveraged his interest in aerospace technology and wind harvesting technology to begin developing what he eventually called the buoyant airborne turbine (BAT). Now, Glass, Rein, and other MIT and Harvard graduates, as Altaeros, are set to test one of the four BAT prototypes they’ve designed and built over the next 18 months in Alaska. The goal of the test — in which the turbine is expected to generate 30 kW of power — is to allow the company to monitor the product’s power output, reliability, environmental impact, and maintenance needs, Holy told us. Engineers also want to see how it withstands environmental and atmospheric conditions. Once this demonstration concludes and any changes or modifications that need to be made are done to the system, Altaeros plans to commercialize BAT, he said. BAT looks not unlike a dirigible or parade float, except it’s shaped like a typical turbine and with blades coming out of its sides. The turbine uses a helium-inflatable shell to lift itself to 2,000 feet, where it can harness stronger and more consistent winds, Holy told us. “Wind speed increases with altitude above ground level and power density increases with a cubic factor of wind speed; a doubling of wind speed roughly equates to an eight-fold increase in power density,” he said. “The turbine itself is similar to all wind turbines, using three blades and a horizontal-axis position. Electricity generated from the floating turbine is transmitted through a conductive tether to its mobile ground station, then on to the customer,” Holy said.In fact, BAT is held in place above the ground with multiple tethers that connect to this station after a system of automated winches lift it into the sky, Holy said. The winches also bring it back to earth once it is no longer in use. 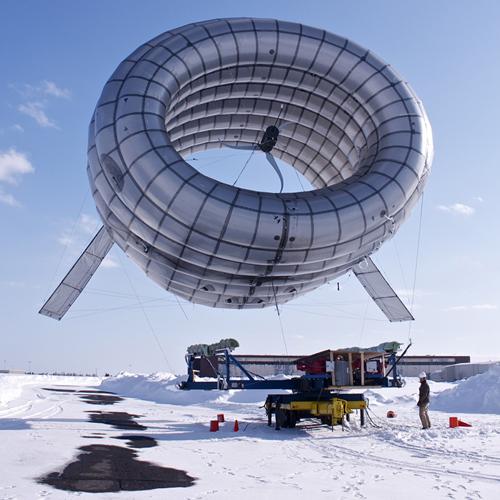