Imperial Helium’s second, future-producing helium well was spud on Dec. 6, 2021, amidst constrained global helium supply. The outlook is good for 2022.

On Dec. 8, 2021, Imperial Helium Corp. (IHC:TSX.V – IMPHF:OTCQB) confirmed that drilling has begun on IHC’s second future producing helium well on the Steveville Structure, IHC-Steveville-3, located at 12-12-020-12W4.Imperial Helium is focused on the exploration and development of North American helium assets, prioritizing the commercialization of its Steveville, Alberta, helium discovery.
“Helium is an important but finite resource that must be extracted from the ground,” reports Forbes. “Like gold, new large helium deposits are becoming fewer and farther between, even though we’ve only known about the element since 1868, a little over 150 years ago,” continued Forbes. “As a result, supply is getting tight. Helium is notoriously difficult and expensive to store, for the very good reason that it escapes every known container over time.” Streetwise Reports recently conducted an interview with David Johnson, CEO of Imperial Helium, to learn more about the elusive element.
“Helium has some unique properties,” confirmed Johnson. “And that’s why there is such a large commercial demand. It doesn’t react with anything. Silicon chips are manufactured using helium to create a pure environment. Fiber optic cables also require a pure environment.” “Helium also has the ability to become what’s known as a superfluid or a superconductor,” added Johnson. “A superconductor is essentially frictionless. It gives us an opportunity to create a pure inert frinctionless environment, which is highly valued from a research perspective.” With increasing helium supply shortfalls around the world, IHC is targeting to become a supplier of helium to critical industries including healthcare, electronics, and semiconductors as well as aerospace.
Supported by strategic alliances in the helium and capital markets ecosystem, IHC intends to leverage its proprietary well database to support long-term growth. 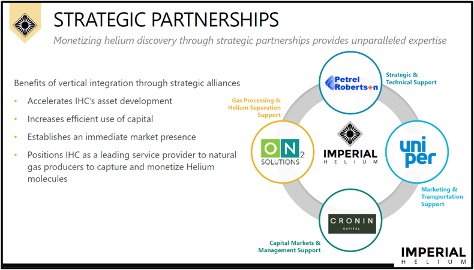 Following receipt of the well license for the company’s second future producing helium well, IHC-Steveville-3 (12-12-020-12W4) was spud on Dec. 6, 2021. To date, IHC has drilled two wells, IHC-Steveville-1 and IHC-Steveville-2, which have further defined the geological structure and validated the superior reservoir quality that was first encountered by the Steveville Discovery Blow-Out well in 1940. With an improved understanding of the Steveville structure provided by previously drilled well data, log analysis of existing wells, and seismic interpretation of area geology, IHC selected the location for IHC-Steveville-3. The well is being drilled on a second structural high point, similar and connected to the original Steveville Discovery Blow-Out. 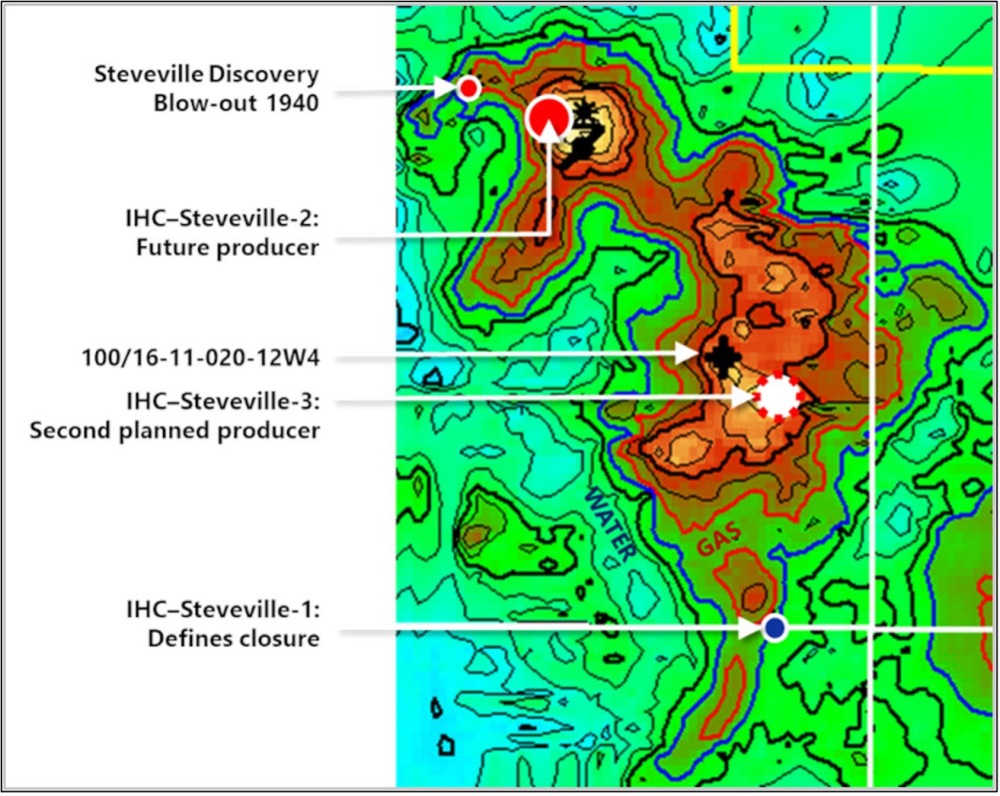 IHC plans to drill IHC-Steveville-3 to a total depth of approximately 1,680 meters over an estimated 20 to 22 days. The IHC-Steveville-3 well will twin the existing 16-11-020-12W4 well, originally drilled in 1974. The formation characteristics of the identified production interval in the 16-11 well strongly parallel those found in the IHC-Steveville-2 well, enhancing the probability for success. Subsequent to drilling, logging, and casing of IHC-Steveville-3, IHC anticipates a minimum of two production tests, in multiple zones, over an eight- to 10-week period. The IHC-Steveville-2 well will be IHC’s first producing well once brought on-stream, which is expected by the end of 2022. Independent production test analysis indicates that IHC-Steveville-2 is capable of producing 5-8MMcf/d, at sustained rates, for more than three years. Based on this analysis, after three or more years, the well will exhibit normal natural decline rates of approximately 15% annually over a 15-plus-year field life. IHC is also in the process of securing an off-take agreement, representing another critical milestone on IHC’s path to producing commercial volumes of helium before the end of 2022.

On Oct. 12, 2021, IHC signed an agreement with ON2 Solutions for the construction and delivery of a prototype plant for producing 99.999% pure (grade-A) helium.
The gas mixtures associated with helium are unique to each resource accumulation. The prototype plant has been designed to accept a broad range of gas compositions and produce pure helium. “The helium market is growing internationally,” reports Johnson, “The U.S. market has lost about 2.1 billion cubic feet of supply. The global demand is around 6 billion cubic feet a year.” “About a third of the supply has been removed from the market,” continued Johnson. “That’s significant. It partly explains the price jump. From a market perspective, helium behaves like liquid natural gas because there’s no easy way to store it and transport it. Helium becomes a liquid at minus 272 degrees centigrade; that’s only 1.15 degrees above absolute zero. It’s very hard to keep the helium liquid. It’s transported in ISO containers that hold about a million cubic feet. It will keep the helium liquid for about 40 days — then it begins to leak. Helium was generated in the crust of the earth, through radioactive decay. Uranium throws out something called an alpha particle, which has two neutrons and two protons. And it grabs the first two electrons it comes into contact with, becomes helium and stays inert forever, and it begins to migrate upward. As it migrates, it finds itself traveling along with hydrocarbons. In order for any gas to be trapped, you need to have a very good seal. And a good seal with a shale needs to very pure, which means it can’t have a lot of silt associated with it. We are very fortunate to have this characteristic in Alberta,” stated Johnson. We are going to finish drilling the well in January of 2022,” said Johnson. “Then we’ll do a production test, which will take about 30 days and which we anticipate will demonstrate comparable results to those previously released at Steveville-2. Assuming both Steveville-2 and Steveville-3 perform as expected, by the end of 2022, we would anticipate being positioned with a production facility that has a throughput capacity of 10 million cubic feet per day of raw gas from these two wells.” “We’ve differentiated ourselves from the rest of the market by taking a low-risk approach to identifying where helium is. At the same time, we are identifying ways to address the complexities associated with separating helium. On top of this, we are determining what integration along the value chain looks like.” “We’ve done this by creating strategic partnerships. We’re excited about the opportunity, the runway, and the blue sky in front of us,” concluded Johnson.
IHC has 88.5 million shares outstanding, with 137.3 million shares fully diluted. As of year end 2021, approximately 8.5% of the stock was owned by insiders. Auctus Advisors and Eight Capital have each issued a target price for Imperial Helium of CA$1.00 per share. The company’s shares trade under the symbol IHC on the TSX Venture Exchange and last closed at .18/share with a market cap of ~$16 million.