Tumbleweed’s Ladder Creek Helium Plant and Gathering System, located near Cheyenne Wells just west of the Kansas-Colorado border, serves natural gas producers operating in eastern Colorado and western Kansas. Two of the new agreements more than doubled the plant’s inlet volume to 12 million cubic feet of natural gas per day (MMcf/d) according to Tumbleweed, which bought the Ladder Creek Helium Plant and Gathering System from DCP Midstream in January 2020. The third contract is expected to increase production by another 3 to 5 MMcf/d over the next 90 days, Tumbleweed said. The increased throughput from these three agreements will increase the plant’s daily helium output to more than 200,000 cubic feet per day (200 Mcf/d,) or approximately 65 million cubic feet (65 MMcf) per year. “I am very excited about the rapid increase of natural gas throughput and the expanded helium production at the Ladder Creek Helium Plant,” said Tumbleweed founder and CEO Durell Johnson. “We have a first-class team that has worked hard with the area’s natural gas producers and with our helium tolling customers. These results support our original position that the helium resource of this area is far from depleted. Helium is a highly valuable part of the natural gas stream in eastern Colorado and western Kansas, and Tumbleweed is pleased to return premium netbacks to the gas producers in the region. Despite the recent downturns in oil and natural gas pricing, helium demand remains strong and consistent.” Tumbleweed has also executed two new helium processing agreements with suppliers of raw helium who deliver their unpurified gaseous helium to the Ladder Creek plant by truck. The process, known as helium tolling, further expands helium processing operations at the Ladder Creek plant. Based on interest from operators in the region, Johnson expects that the plant – which he originally built and commissioned 20 years ago as a young engineer for Union Pacific Resources – could be at capacity within the next 12 to 24 months. Current processing capacity at the Ladder Creek cryogenic processing plant is 40 MMcf/d, expandable to 50 MMcf/d. Tumbleweed said it will explore plant expansions as demand warrants. 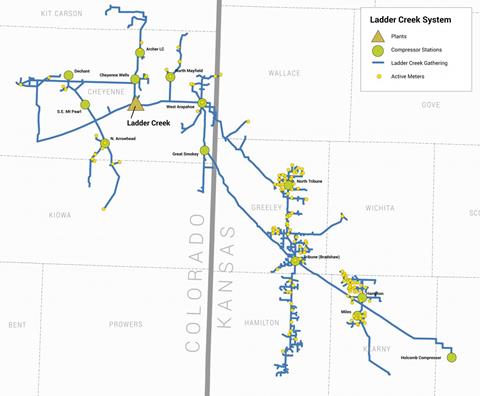