Here’s How We Could Mine The Moon for Rocket Fuel

The Artemis program is supposed to usher in a new age of lunar mining, especially for water ice. But how, exactly?

The moon is a treasure trove of valuable resources. Gold, platinum, and many rare earth metals await extraction to be used in next-generation electronics. Non-radioactive helium-3 could one day power nuclear fusion reactors. But there’s one resource in particular that has excited scientists, rocket engineers, space agency officials, industry entrepreneurs—virtually anyone with a vested interest in making spaceflight to distant worlds more affordable. It’s water. Why? If you split water into hydrogen and oxygen, and then liquefy those constituents, you have rocket fuel. If you can stop at the moon’s orbit or a lunar base to refuel, you no longer need to bring all your propellant with you as you take off, making your spacecraft significantly lighter and cheaper to launch. That’s important because Earth’s atmosphere and gravitational pull necessitate use of tons of fuel per second when rockets launch. Creating a sustainable source of fuel in space could reduce the costs and hazards associated with heavy liftoffs. One NASA estimate suggests there might be 600 million metric tons of lunar ice to harvest, and other higher-end estimates say one billion metric tons is a possibility. In other words, if you could mine it effectively, the moon would become a cost-cutting interplanetary gas station for trips to Mars and elsewhere.

Show me the money

Everyone wants a piece of the action. The European Space Agency has a loose vision to build a “moon village” that would include mining operations. China’s Chang’e 5 lunar exploration and sample return mission is thought to be a precursor investigation to understanding more about lunar water content. India’s failed lunar rover mission last August was supposed to map water ice at the lunar south pole. The US has designs on lunar water too, of course. On May 15, NASA announced the Artemis Accords (PDF)—a proposed legal framework for mining on the moon, named after NASA’s Artemis program to return astronauts to the lunar surface in 2024. Artemis is the most important step toward establishing a permanent American presence on the moon. The tenets touch on issues that include emergency assistance services and interoperability of technology standards. But more importantly, the Artemis Accords allow the US to dictate the terms of lunar mining first, before other countries can. They also propose setting up neutral “safety zones” between different lunar bases to prevent interference and conflict between countries and companies. But what they can’t tell us is how we’ll actually access the moon’s water. There are plenty of obstacles. The cold temperatures and radiation could endanger humans and degrade sensitive equipment. It’s not ideal to have a large crew of human beings running these kinds of operations day in and day out, but it’s equally unclear how much can be delegated to autonomous systems. Lunar soil itself—coarse and jagged, and prone to sticking to everything—could wreck machinery and pose safety issues to workers in spacesuits. Although we’ve shown the feasibility of refueling satellites in orbit, doing the same thing for large spacecraft on the moon or in lunar orbit will create its own set of challenges thanks to microgravity and regolith, the layer of loose material covering the lunar bedrock. And we would still need to have astronauts living semi-permanently on the moon’s surface. NASA’s ambitious Artemis plans call for building a lunar base by 2028 (along with a lunar space station called Gateway that’s supposed to facilitate trips beyond the moon), but that’s a mere four years after we (are supposed to) return to the moon. This vision is still closer to science fiction than reality.

Even assuming these obstacles are surmountable, how easy would it be to actually extract water once we were there? First, lunar water isn’t that easy to access. “It’s not like an ice sheet or a slab of ice like a glacier,” says Julie Stopar, a visiting scientist with the Lunar and Planetary Institute. Water on the moon is in the form of tiny ice grains mixed into the soil, mostly located in the permanently shadowed regions within craters near the poles. Here, temperatures of 40 K (-233.15 °C) keep the water ice stable and undisturbed. The grains are heavily mixed with complex organics and metals. In 2009, NASA’s LCROSS mission shot a rocket into the moon to fling plumes of moon rock into the air. An analysis of this airborne material found it was only 5.6% water by weight. That data, which at 10 years old is still the most recent direct analysis of lunar soil water content we have, suggests even if water ice can be separated from the lunar soil, it’s still very impure and would require aggressive purification to rid it of contaminants that would ruin any fuel made from it. Last year George Sowers, an engineer of space architectures at the Colorado School of Mines, and more than a dozen other scientists wrote a paper published in the journal Reach that described one proposed method for processing lunar water ice. Large towers with concave mirrors on the top would be erected and installed around the crater edges to reflect sunlight down into permanently shadowed regions. This energy would heat the lunar soil up to 220 K (-53.15 °C), warm enough to get the water ice to sublimate into vapor. A tent cover over the soil (transparent, so the redirected sunlight could hit the surface) would trap and capture this water vapor, which would be moved into large aluminum units where it would freeze back into ice. Haulers (maybe robotic, or maybe driven by astronauts) would drive the ice out to a facility where it could be purified. Here, the water would be split into hydrogen and oxygen through electrolysis and finally liquefied so the constituents could be used as rocket propellant. Trans Astronautica Corporation, based in California, wants to do something similar. It has sketched out plans for tall towers with solar panels to harness energy and bring it down to the craters, and then use radio frequency, microwave, and infrared radiation to sublimate the water ice. “None of those steps is exotic,” says Sowers. They exist as industrial-scale applications on Earth. The low gravity should make it easier to build and move materials around. However, these concepts do require astronauts on the ground to run certain functions, and keeping those people safe and comfortable and housed would require an extraordinary amount of resources and energy. (OffWorld, a space robotics company with offices in California and Luxembourg, says it wants to make water ice mining a totally autonomous process, run by a swarm of AI-powered robots, but that is ambitious to say the least.) In fact, none of these techniques or plans are anywhere near ready yet. Although we’ve demonstrated the ability to operate rovers and landers on the moon to withstand cold temperatures and radiation, we don’t know if huge infrastructure can last just as long. Each region of the moon sits in darkness for two weeks of the month (and longer if we’re talking about the permanently shadowed parts of craters), and it’s not easy to just wake a piece of technology from a 40 K slumber. According to Phil Metzger, a space technologist at the University of Central Florida and a coauthor of the Reach paper, the biggest technical limitation to water ice mining on the moon—the only issue that “keeps us up at night”—is the purification process. And because we don’t have actual lunar samples to regularly test these technologies with, it’s hard to develop membranes to filter out contaminants specific to the moon. Impurities could make the liquid oxygen and liquid hydrogen fuel unusable—or worse, unstable and explosive. Water harvesting on the moon will have a high failure rate for years, Metzger predicts. “I don’t think the technologies that people are designing and conceiving of today are going to just work perfectly on the moon,” he says. “But I do believe there will be a lot of industrial activity on the moon within several decades,” he adds. “And when we reach that point, people are going to look back and say ‘Oh, it should have been obvious. All the pieces were in place.’” 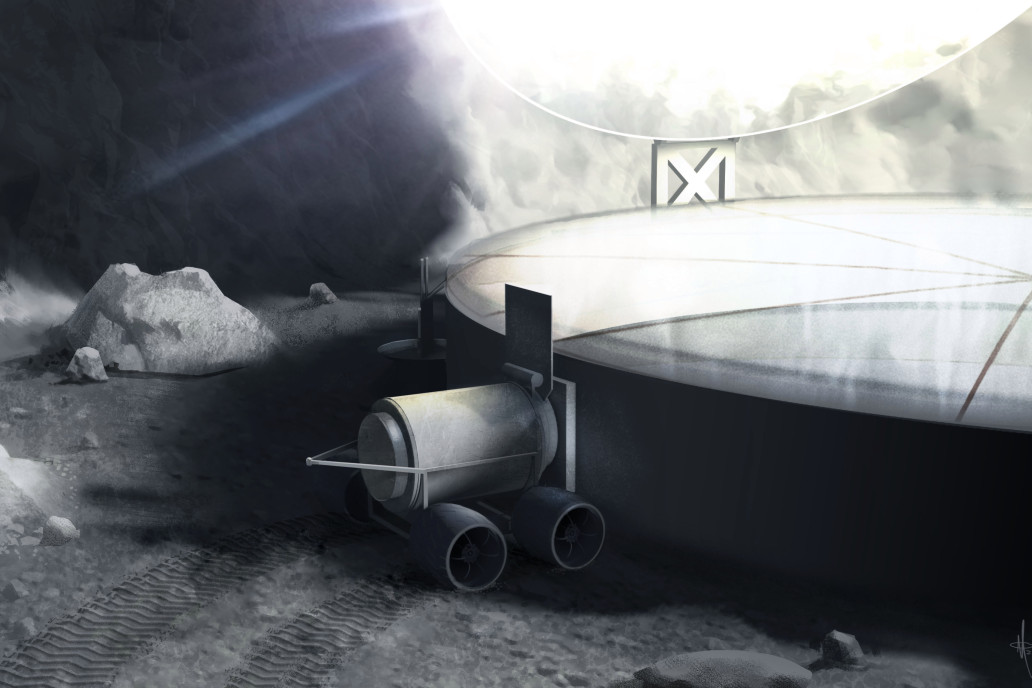 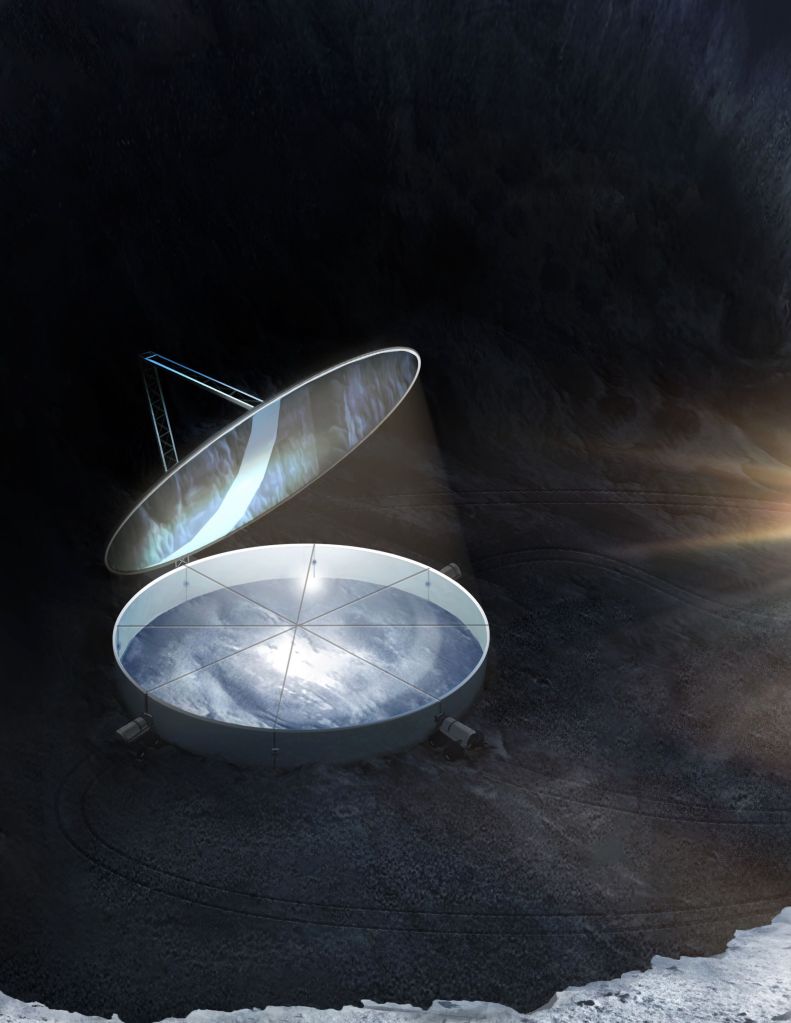 In this proposed design, mirrors use sunlight to heat the water ice in the lunar soil. The water vapor is transferred into tanks on the side. COURTESY GEORGE SOWERS