Physicists from the ASACUSA (Atomic Spectroscopy And Collisions Using Slow Antiprotons) Collaboration at CERN have successfully synthesized and studied theoretically predicted but never before verified atoms of pionic helium. Their results mark the first time such spectroscopic measurements have been made on an exotic atom containing a meson.

“Laser spectroscopic measurements of exotic atoms containing mesons could be used to determine with high precision the mass and other properties of the constituent mesons, as well as to place limits on possible new forces involving mesons,” said Dr. Masaki Hori, a physicist at the Max-Planck-Institut für Quantenoptik and co-spokesperson of the ASACUSA Collaboration. “For the meson used in our study, one of the lightest mesons, we might eventually be able to determine its mass with a precision of less than about one part in a hundred million.” “That would be 100 times more precise than has been achieved so far, and would allow a precise comparison with the Standard Model prediction to be made.” The pionic helium atom created by Dr. Hori and colleagues consists of a nucleus from an isotope of helium (helium-4), an electron and a negatively charged pion in a high-lying energy state. Its lifetime is more than a thousand times longer than that of any other atom containing a pion. To make such atoms, the physicists took negatively charged pions provided by 590 MeV ring cyclotron facility at the Paul Scherrer Institut (PSI) and focused them using a magnet into a target containing superfluid helium. 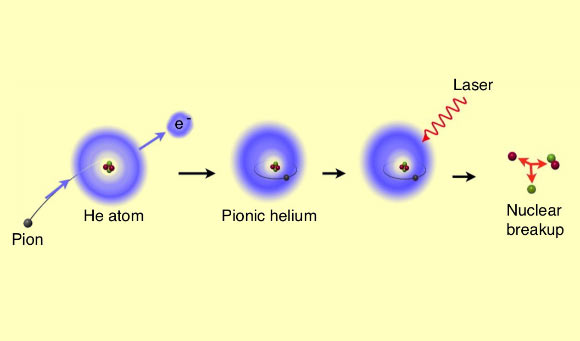 A pion replaces one of the two electrons in a normal helium atom to form pionic helium. Image credit: ASACUSA Collaboration, CERN.

Next, to confirm that the atoms had indeed been created and to study how they absorb and resonate with light, the researchers fired laser light of various frequencies at the target and searched for instances in which the pions made a quantum jump between different energy levels of their host atoms. After some trial and error playing with different laser frequencies, they were able to identify a specific jump. This jump was predicted to result in the absorption of the pion by the helium nucleus and the subsequent breaking of the latter into a proton, a neutron and a composite particle made up of a proton and a neutron. “We detected these fragments using an array of particle detectors that was also made at CERN and brought to PSI, thereby confirming that the pions had indeed made the jump,” the scientists said. “Next on our agenda is to improve the precision with which the jump was identified and to search for other jumps, with the view to using them to measure the mass of the pions and test the Standard Model.” The team’s work was published in the journal Nature.