Kolkata: The Hooghly district administration has taken a significant stride in boosting its aerial surveillance by using helium balloons fitted with cameras. The move is aimed at ensuring strict enforcement of lockdown in the district, with most parts of it being declared as COVID-19 containment zones. “We are leaving no stones unturned to strictly enforce lockdown in the district. Any violation of the norms of lockdown is being dealt with strongly by the police. Our aerial surveillance has received a major boost through the use helium balloons fitted with CCTV cameras. We are placing these balloons at strategic locations in consultation with the police and are monitoring the lockdown situation very seriously,” said Y Ratnakara Rao, District Magistrate, Hooghly. Also Read – Over 5 crore households surveyed to map Corona spread: Mamata Four such balloons are being used and important places in Konnagar, Sreerampore and Chinsurah were covered on Monday. The balloons are raised to a height of 100 to 200 feet by a string and are kept static so that the camera fitted in them can do real-time monitoring. The CCTV footage is being monitored from the district control room as well as from the office chamber of the DM and any violation of social distancing norms or other irresponsible act is being communicated to the police so that immediate intervention is possible. Also Read – 2,455 tests in last 24 hrs, toll 68 A senior official in the district said that drones have been used for aerial surveillance, but they have certain limitations. After flying for a period of approximately half an hour they usually need to be brought down to the ground for changing batteries. “So monitoring through drones can be done for a limited period of time. However, the balloons can be used for round-the-clock surveillance if we feel it is necessary to do so,” the official added. Also Read – Combating Corona: Massive door-to-door surveillance gets CM’s pat The district administration is procuring two more balloons for widening the monitoring area. All wards under the municipalities of Uttarpara Kotrang, Dankuni, Sreerampore, Rishra, Konnagar, Baidyabati, Chandannagar, Bhadreshwar and Champdani have been identified as COVID-19 containment zones. Several Gram Panchayat areas in the district are also among the containment areas. The district administration has also deployed monitoring officers for maintaining vigil at the inter-district border points for strong surveillance. 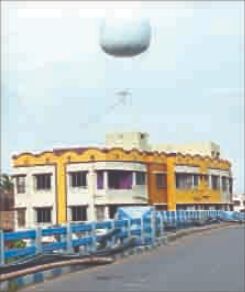 This entry was posted in Air ship, Helium application. Bookmark the permalink.