How Moon Mining Could Transform The Economy and Space Travel

Moon mining is poised to become a thriving off-world industry, one that could transform not only the world economy, but also be a driving force for putting boots on the ground throughout our solar system. But what exactly does the moon, long considered a barren rock — or, in some quarters, a very old piece of cheese — have to offer? Don’t let that austere demeanor fool you, says NASA. The moon’s real commercial value lurks just beneath the surface, as the agency explains in this how moon mining would work graphic. Its resources can be broken down into three key elements. The first, water, needs little introduction. It’s the basis for life as we know it.

Moon water could become the new oil for space travel

If humans are going to settle permanently on the moon, they won’t be able to rely on a steady stream of care packages from Earth. Instead, water extracted from ice at the satellite’s poles could help them grow their own crops. But water, being composed of hydrogen and oxygen, can also be converted to rocket propellant. That would give missions beyond the moon an enormous boost. Currently, Earth-based launches have to carry all the propellant they need on board, which makes them unwieldy and unsuitable for longer range missions. Refined moon water, on the other hand, would allow spacecraft to fill up the tank when they’re already in space. “The idea would be to get a sort of supply chain started outside of Earth for certain products — in particular, for water as a propellant — so that it could be much easier to navigate to space from one body to another,” Julie Brisset, a research associate at the Florida Space Institute, tells The Verge. Indeed, the moon and its refined water could become the local Esso station for space travelers.

The second key element found beneath the lunar surface that humans would look to mine is Helium-3. Since the isotope isn’t radioactive, it wouldn’t generate dangerous waste products, prompting experts to tout Helium-3 as a safer source of nuclear energy. Our planet doesn’t get much Helium-3 — mostly because our magnetic field blocks the stuff as it sails in from solar winds. The moon doesn’t have that kind of buffer, so it gets a steady dusting of Helium-3.

The third chief draw to moon mining? Rare earth metals, like Yttrium, Lanthanum, and Samarium. These minerals aren’t easy to come by on our planet. In fact, about 95 percent of them are controlled and stored by a single country: China. But we all certainly need them. Everything from wind turbines to glass for solar panels to hybrid cars to your smartphone contains rare earth metals. Even guided missiles and other high-tech military equipment makes use of them. “There could be tons and tons of platinum group metals on the moon, rare-earth metals, which are tremendously valuable on Earth,” NASA Administrator Jim Bridenstine tells CNBC. So why haven’t we started digging yet? Well, despite the promise of lunar riches, engineers have yet to work out one niggling detail: how a full-scale mining operation would work. Maybe robots could do it, using 3D-printed equipment. But we would still have to build some sort of infrastructure there; not everything can be carted directly from moon to Earth. As NASA notes, “at this stage, it’s still guesswork. Most of the proposals have resembled the Underpants Gnomes’ business model.” If you’re not familiar with the “South Park” reference, that refers to a three-part business model. The first phase is to identify a resource. The third and final phase is to profit. The second phase is a question mark, because no one really knows how to get to Phase 3. At least, not yet. That’s not to say no one has a clue. Have a look at the video above to see how moon mining could work.

One thing is for certain. Right about now, the U.S. must be pretty pleased with its decision not to sign the Moon Treaty back in 1979. That pact’s chief objective was “to provide the necessary legal principles for governing the behavior of states, international organizations, and individuals who explore celestial bodies other than Earth, as well as administration of the resources that exploration may yield.” In other words, the treaty would ensure the moon’s resources couldn’t be carved up for the commercial interests of a single nation. In all, 18 nations signed it. But, by joining Russia and China in not backing the treaty, the U.S. essentially kept the door open for American companies to someday reap some out-of-this-world profits. Never say capitalism lacks foresight. Because that day may have finally arrived. This week, U.S. President Donald Trump signed an executive order, establishing U.S. policy on the exploitation of off-Earth resources. “Americans should have the right to engage in commercial exploration, recovery, and use of resources in outer space, consistent with applicable law,” the order notes. “Outer space is a legally and physically unique domain of human activity, and the United States does not view it as a global commons.” That policy would span anything the U.S can dig up on Mars and other planets, as well as asteroids. But the lowest hanging fruit, the one most readily within grasp, would be our faithful sidekick, the moon. “As America prepares to return humans to the moon and journey on to Mars, this executive order establishes U.S. policy toward the recovery and use of space resources, such as water and certain minerals, in order to encourage the commercial development of space,” Scott Pace, deputy assistant to the president and executive secretary of the U.S. National Space Council, said when the executive order was shared. In other words, the U.S. may see the moon a lot like the way Elon Musk sees the star-filled sky — to the spacefarer go the spoils. 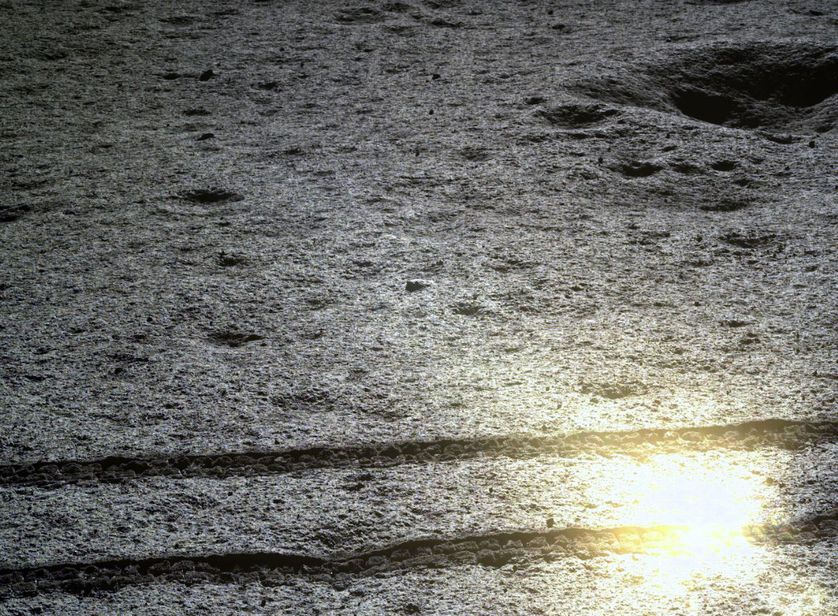 The rocks on the dark side of the moon could hold a trove of rare earth metals.