Stable compounds made from helium and ammonia are predicted to form at the extreme pressures found inside Neptune and Uranus. 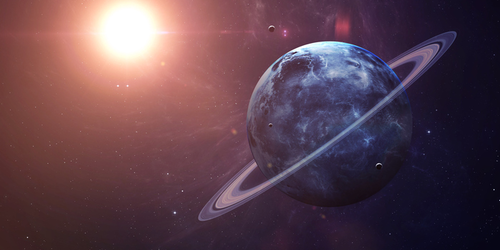 Helium—the most inert element on the periodic table—and ammonia—a compound made of nitrogen and hydrogen—are major components of icy giant planets, such as Uranus and Neptune. Although helium is generally considered unreactive, its reactivity may increase under the high pressures and temperatures (millions of atmospheres and several thousands of kelvin) found on these planets. But if it does, it’s unclear what compounds might emerge. Using crystal-structure search techniques and first-principles molecular dynamics simulations, Cong Liu at Nanjing University in China and colleagues now predict that three helium-ammonia compounds can form at the high pressures of planetary interiors. Water, ammonia, and methane compress and heat up at the pressures and temperatures found in the interiors of Uranus and Neptune. Theoretical models suggest that these “hot ices” sit in a layer beneath helium-rich atmospheres, with which they can interact. To find out how hot ices react with helium, Liu and his colleagues searched for stable compounds of He-NH3. They identified three compounds, which they found could have eight different crystal structures. Some of these crystals are “host-guest” structures, where two or more molecules are held together by forces other than covalent bonds; others are perovskites, a common mineral structure on Earth. The team mapped out phase diagrams showing the state of the compounds under different pressure-temperature conditions, which included states that are partially solid and liquid. The researchers say that their findings provide a framework in which to understand the properties of compounds that may exist in icy planets. High-pressure experiments using diamond anvil cells could verify the predictions.