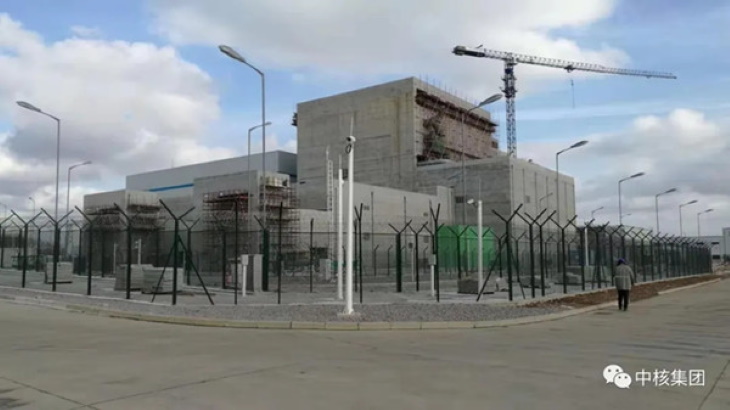 Construction of the demonstration HTR-PM unit at Shidaowan

Work began on the demonstration HTR-PM unit – which features two small reactors and a turbine – at China Huaneng’s Shidaowan site in Weihai city, in East China’s Shandong province, in December 2012. China Huaneng is the lead organisation in the consortium to build the demonstration units together with CNNC subsidiary China Nuclear Engineering Corporation (CNEC) and Tsinghua University’s Institute of Nuclear and New Energy Technology, which is the research and development leader. Chinergy, a joint venture of Tsinghua and CNEC, is the main contractor for the nuclear island. The pressure vessel of the first reactor was installed within the unit’s containment building in March 2016. The vessel – about 25 metres in height and weighing about 700 tonnes – was manufactured by Shanghai Electric Nuclear Power Equipment. The second reactor pressure vessel was installed later that year. CNNC said the “pairing of the key nodes” of the second reactor was completed on March 18. The pressure vessel, steam generator and hot gas duct, it said, have been “rigidly connected in the form of a flange to form a primary circuit system for the thermal energy transmission of the reactor, which constitutes a second barrier to prevent the leakage of radioactive materials.” The key node pairing creates “the necessary prerequisites for the subsequent reinstallation of the low-temperature helium riser of the steam generator, the installation of the main steam detachable pipe section and the installation of the main helium fan,” CNNC said. The demonstration plant’s twin HTR-PM reactors will drive a single 210 MWe turbine. Helium gas will be used as the primary circuit coolant. The steam generator transfers heat from helium coolant to a water/steam loop. The design temperature of the HTR-PM reaches 750 degrees Celsius. A further 18 such HTR-PM units are proposed at Shidaowan. Beyond HTR-PM, China proposes a scaled-up version called HTR-PM600, which sees one large turbine rated at 650 MWe driven by some six HTR-PM reactor units. Feasibility studies on HTR-PM600 deployment are under way for Sanmen, Zhejiang province; Ruijin, Jiangxi province; Xiapu and Wan’an, in Fujian province; and Bai’an, Guangdong province.