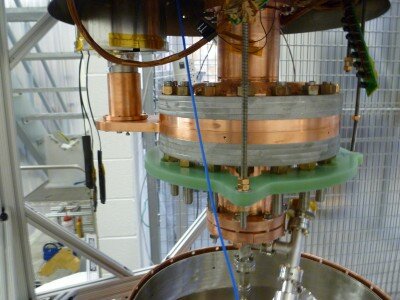 Copper/Niobium/NiobiumTin cavity connected to the cryocooler.

The building blocks of superconducting accelerators are superconducting radiofrequency (SRF) cavities made primarily from niobium that are combined in a vessel and bathed in liquid helium to reach superconducting temperatures. While a large liquid helium cryogenics plant may be practical for a major research facility, it can be a barrier to new applications of this accelerator technology. Now, advances in cavity technology, materials and cryocooler development may lower this barrier to industrial and medical applications of SRF technology. After completing more than 5,000 cavity tests in the Vertical Test Area (VTA) using liquid helium, this year a team from the SRF Institute’s R&D Department at Jefferson Lab cooled and successfully tested an SRF cavity for the first time in one of the VTA’s vertical cryostats without any liquid helium. How was this accomplished? A number of ongoing initiatives came together to make this possible. The first critical component is the use of a cryocooler to cool the SRF cavity. A cryocooler is a closed-cycle refrigerator that only requires a small volume of helium gas and offers a number of advantages—being easy to operate, compact, reliable and a commercial off-the-shelf item. With cryocoolers already being used to cool superconducting magnets in magnetic resonance imaging (MRI) machines at hospitals, and with current industrial interest in accelerator technology growing, Jefferson Lab was motivated to further develop SRF technology to address this need.

The next element was advances in the use of the niobium-tin compound Nb3Sn, which has a higher superconducting transition temperature, for SRF cavities. Jefferson Lab has been developing high-performance Nb3Sn cavities since 2013, based on the work of Grigory Eremeev, who received a 2016 Department of Energy Early Career Award. A key advantage offered by these niobium-tin cavities is that they remain superconducting at twice the temperatures required by pure niobium accelerating cavities, and can operate more efficiently at a higher temperature than Nb ones. Using this technology could provide significant operational cost savings for future accelerators. Research at Jefferson Lab has resulted in excellent quality Nb3Sn thin film coatings on several different SRF cavity types. A specific 1.5 GHz bulk Nb single-cell cavity, on which a Nb3Sn film was grown, was chosen for integration with a cryocooler. By using a cryocooler, the cavity surface is not directly cooled by liquid helium, making the cavity more susceptible to thermal breakdown, particularly if defects are present. Therefore the outer surface of the cavity was coated with a few-millimeter-thick, high-purity copper layer. Copper (Cu), which has higher thermal conductivity than Nb, enhances the heat transfer to the cryocooler. This was achieved by having the Cu layer deposited on the cavity using standard methods at a commercial vendor. The Jefferson Lab team then designed and built a test stand holding the cavity and the cryocooler to fit into one of the existing VTA cryostats to serve as a vacuum vessel to conduct the test. The RF test results were close to what had been measured in liquid helium. “We were able to achieve a peak surface magnetic field of 29 mT, corresponding to an accelerating gradient of 6.5 MV/m, and we could operate the cavity at 5 W of dissipated power without any thermal instability,” says Gigi Ciovati, an accelerator scientist conducting this research. These results are similar to what was recently achieved at Fermilab using a different conduction-cooling setup.

What is the significance of this work? While maintaining and operating a liquid helium cryoplant to operate SRF cavities is standard at a national lab like Jefferson Lab, for companies pursuing industrial or medical applications of efficient SRF technology it is a significant barrier. One such application is a low-energy, high-power electron accelerator for the treatment of wastewater or flue-gases. Already Jefferson Lab designed one such accelerator based on a conduction-cooled SRF cavity [G. Ciovati et al., Phys. Rev. Accel. Beams 21, 091601 (2018)], and the experimental results achieved both at Jefferson Lab and Fermilab put the design on a much stronger footing. “The next step, over the next two and a half years, is to demonstrate that we can achieve a peak surface field corresponding to an energy gain of 1 MeV, the beam energy required for the accelerator for environmental remediation that we have designed, in a conduction cooled SRF cavity inside a horizontal cryomodule,” says Ciovati, who received a grant from the DOE Accelerator Stewardship program to carry out this work. Industry will be heavily involved in the project, with the final RF test being conducted at General Atomics, Jefferson Lab’s industrial partner.

This entry was posted in Helium replacement, New technology. Bookmark the permalink.