Ion beam radiotherapy offers precision dose deposition, with a low entrance dose increasing to a maximum at the Bragg peak and then falling off sharply. This steep dose gradient, however, makes treatments such as carbon-ion therapy highly sensitive to range uncertainties. As such, there’s a clear need for improved treatment verification techniques.

One recent idea is to add a small amount of helium ions to a carbon-ion treatment beam to enable online monitoring during therapy. Fully stripped helium and carbon ions exhibit roughly the same mass/charge ratio, allowing their simultaneous acceleration in a synchrotron to the same energy-per-nucleon. As helium ions have about three times the range of carbon ions (at the same velocity) they travel straight through the patient and can be used for imaging while the carbon-ion beam provides the treatment.

“We wanted to investigate whether the advantages offered by particle imaging could also be exploited for online treatment verification,” explains first author Lennart Volz, who worked on the project in close collaboration with UCL’s Laurent Kelleter. “Range uncertainty is a key challenge in particle therapy and any accurate method for online treatment verification could greatly benefit patients. The mixed beam could be ideal for this, as it would enable you to see what you treat.”

Since the HIT synchrotron is not set up to deliver mixed beams, the researchers irradiated the phantoms sequentially with helium- and carbon-ion beams of similar energy-per-nucleon, using a 10:1 carbon-to-helium ratio. To monitor the range of the helium-ion beam and carbon-ion fragments, they used a novel range telescope developed at UCL, comprising a stack of thin plastic scintillator sheets read out by a flat-panel CMOS sensor.

Summing the scintillation light yield in each sheet and attributing it to the water-equivalent thickness at the centre of the sheet enabled the creation of depth–light curves. The curves of the carbon- and helium-ion beams were scaled 10:1 and then summed to produce a “mixed-beam” signal. 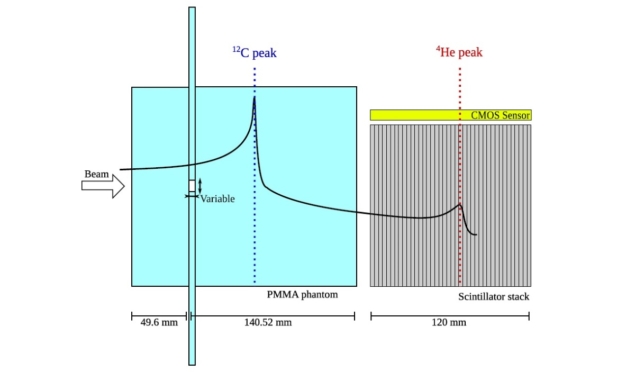 The researchers assessed the system’s sensitivity using a PMMA slab phantom containing different sized air slits. They used the difference between the measured light output signal and a reference measurement to quantify range changes. Irradiating phantoms with slits of 2 mm thickness and widths of 5 and 2 mm resulted in relative differences of 40% and 17% (from a solid phantom), respectively, in the residual beam range. This was expected as more of the 8 mm FWHM beam (55%) crosses the larger slit than the smaller one (22%). Even a 1 mm thick, 2 mm wide slit could be observed, with a relative difference of 8%.

Clinical scenarios
To examine a more clinically relevant scenario, the team used the ADAM pelvis phantom to study the effect of bowel gas movements on helium-ion beam range. They generated a prostate cancer treatment plan and irradiated the ADAM phantom using three spots from the plan (with the same energy), incident upon: the tumour isocentre, a spot near the rectum and a spot between the two. They inflated a rectal balloon inside the phantom to air volumes of 30, 45 and 60 ml.

For the spot near the rectum, even the smallest air volume in the balloon caused an observable change in helium range. For larger inflations, the team saw a drastic overshoot in helium range as the beam crossed into the rectum and rectal gas. Similarly, for the in-between spot, the two larger inflations created observable signal changes. At the isocentre, the team saw no significant change with balloon inflation. In a Monte Carlo simulation of the experiment, however, the two larger air volumes caused small changes.

Finally, to investigate the effect of small patient rotations on the observed signal, the team used the ADAM-PETer pelvis phantom. They irradiated the phantom rotated by 2° and 4° around its vertical axis. Both rotations led to a noticeable change in the measured mixed beam signal compared with the non-rotated state, with similar but slightly larger effects seen in simulations.

The findings reveal the potential of using a mixed helium/carbon beam to monitor intra-fractional anatomy changes. The ability to detect range modulation from a narrow air gap affecting less than a quarter of the beam demonstrates the method’s relative sensitivity. And for the more realistic cases, the mixed beam could help detect bowel gas movements and small patient rotations.

The researchers suggest that for anatomical sites subject to slow or non-periodic motion, sequential beams could provide useful information, provided that fast switching of ion sources or beam energy is technically feasible. But when treating moving targets with strong range changes, such as lung tumours, an actual mixed helium/carbon beam would be advantageous.

“Given the potential of the mixed helium/carbon beam, the next step is to generate a real mixed beam, which we are investigating in collaboration with the GSI Helmholtz Centre for Heavy Ion Research and HIT,” Volz tells Physics World. “Long-term, we would like to investigate generating high-resolution online helium radiographs with a mixed beam.”