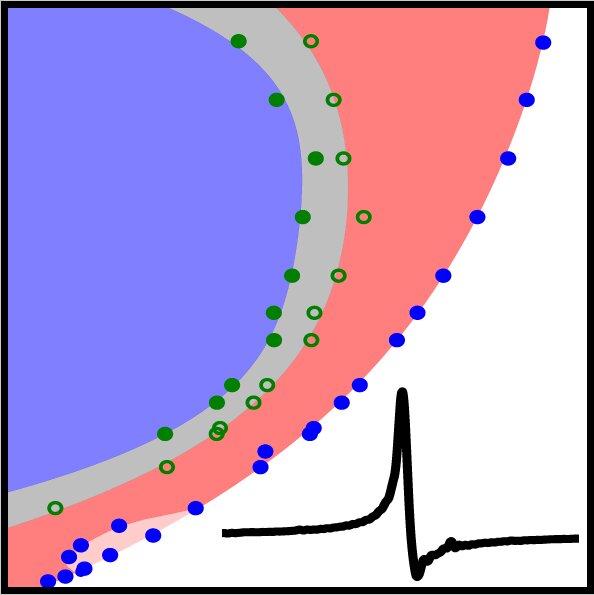 Physicists have been studying superfluid 3He under nanoscale confinement for several years now, as this unique liquid presents a rich variety of phases with complex order parameters that can be stabilized. While past studies have gathered many interesting observations, a complete and reliable picture of superfluid 3He under confinement has yet to be attained. Researchers at the University of Alberta have recently taken a huge leap forward in this direction, by introducing new phase diagrams of superfluid 3He under varying degrees of uniaxial confinement. Their paper, published in Physical Review Letters, could shed light on the progressive stability of the exotic liquid’s A phase, while also uncovering a growing region of stable pair density wave state. “The idea for this project was seeded all the way back in the mid-2000s when I was a PhD student at Northwestern University,” John Davis, one of the researchers who carried out the study, told Phys.org. “I was working with Prof. William Halperin, doing experimental studies of superfluid 3He, while in the group of Prof. Jim Sauls a PhD student named Anton Vorontsov, now a professor at Montana State University, was exploring ideas around superfluid 3He under confinement.” The ideas developed by Vorontsov over a decade ago culminated in two interesting theoretical papers, published in 2005 and 2007. The first paper predicted the formation of a ‘domain wall’ between two types of superfluid. In physics, domain walls are known, among other things, for separating microscopic domains in ferromagnetic materials and the alignment of magnetic domains ultimately leads to macroscopic ferromagnetism. However, the idea of domain walls separating two regions of a fluid is far less intuitive and is therefore somewhat tantalizing. “Vorontsov’s 2007 paper took this idea even further and predicted that in a certain range of pressures, temperatures, and confinement, these domain walls could become arranged and form a ‘superfluid crystal,'” Davis said. “This idea of a material having both the regular spatial structure of a crystal and the superflow properties of a superfluid has intrigued me ever since.” The idea introduced by Vorontsov is partly reminiscent of supersolids, a topic that attracted a lot of interest within the physics field a few years ago. However, the new state he described does not begin as a solid state, but rather as a fluid. It is thus far more similar to what is observed in liquid crystals, which can have spatial ordering similar to solids and yet remain liquid-like. In the same way in which these are referred to as ‘liquid crystals’, therefore, Vorontsov’s prediction could be called that of a ‘superfluid crystal’. In their recent paper, Davis and his colleagues decided to use the more generic term ‘pair density wave’, in order to minimize controversy. Regardless of the term they used, their goal was to seek out the crystalline ordered superfluid state introduced by Vorontsov. “From the time when that 2007 paper was published, I have been slowly building up toward performing this experiment.” Davis said. “Since 2010, my independent research group has been constructing the infrastructure to cool liquid 3He to the sub-millikelvin temperatures required, building the thermometers needed to measure these temperatures and inventing experimental techniques to measure the properties of superfluids under confinement.” In order to identify new experimental methods to measure the properties of superfluids under confinement, the researchers started using modern nanofabrication techniques. These techniques allowed them to confine 3He to the nanoscale, which is what ultimately differentiates their experiments from others carried out in the past. “We actually stumbled upon the technique that we used in our study, that of mechanical resonance, by accident,” Davis explained. “We use something called a Helmholtz resonance, which means that it is a mechanical resonance of a fluid. This is similar to the whistle you get when you blow across the top of a beer bottle. This whistle is a mass-spring system, with the mass being the fluid in the neck of the bottle and the spring being the compressibility of the beer in the bottle.” Similar to what happens when blowing across the top of a beer bottle, the technique used by Davis and his colleagues results in a mass-spring system entirely composed of superfluid. The frequency of the resulting whistle can then act as a measure of the superfluid state’s properties. 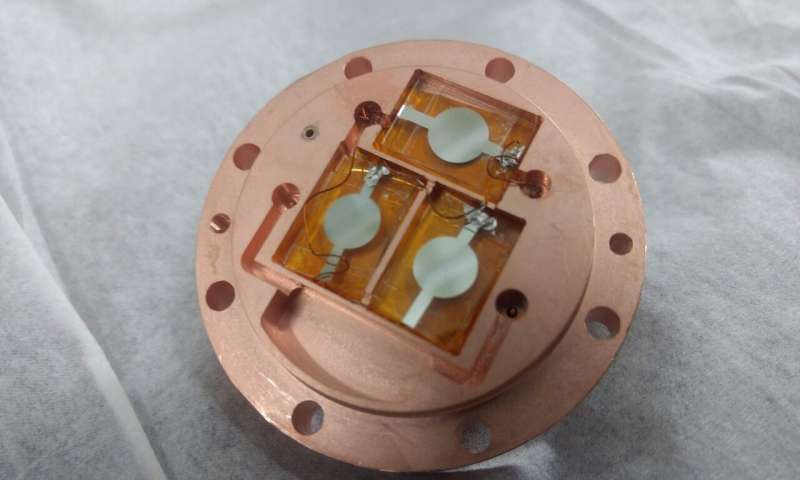 Image showing three devices in the lid of the sample cell before closing it up.

The researchers unveiled this mechanical resonance by accident in one of their previous experiments. Once they understood what it was, they realized that it could help them in pursuing their research goals. “We spent many years refining this technique, until in January of 2019 two of my lab members, PhD student Alex Shook and postdoctoral fellow Vaisakh Vadakkumbatt, set off to finally search for this superfluid crystal state in liquid 3He,” Davis said. “As soon as the data started rolling in, I knew we were onto something big. But to be really confident, these guys spent months and months refining the data acquisition and making sure our thermometry was accurate.” When trying to calculate the expected phases based on their observations, the researchers couldn’t rely on previous studies, as their experimental technique allowed them to explore a wider range of pressures and confinements than those reported in previous works, so theories backing their observations did not yet exist. They thus decided to share their observations with another research team led by Prof. Joseph Maciejko, who helped them to carry out the necessary calculations. “Prof. Maciejko’s student Pramodh Senarath Yapa performed calculations of the expected phase transitions under the same conditions as our experiments, but we did this in a sort of ‘double blind’ way,” Davis explained. “We gave Pramodh the confinements corresponding to our experiments and what pressure and temperature ranges we were exploring, but did not reveal our precise transition temperatures. Instead, Pramodh did the calculations and Alex Shook did the experimental analysis and construction of the phase diagrams and one day in a big reveal we put them together.” The agreement between the results of calculations carried out by Pramodh and the phase diagrams devised by Shook was remarkable, with zero adjustable parameters. The researchers were thus able to gain important new insight about the progressive stability of the A phase in superfluid 3He, while also highlighting a growing region of the stable pair density wave state. While this is deeply fundamental physics, exploring what it means to have a state that has spatial ordering, like a crystal, but that is also a superfluid, could have important implications for other condensed matter systems. For instance, a similar pair density wave state is currently being examined in high temperature superconductors, so the researchers’ work could influence work in that area too. “For me, the most meaningful part of this experience has been reinforcing to the next generation of researchers, such Alex, Vaisakh and Pramodh, that superfluid 3He is an intensely interesting system,” Davis said. “It is such a rich and clean system, with much left to be explored. I can only hope that some of the readers of our paper also get this feeling and maybe some of them will find their way to studying superfluid 3He.” A further interesting aspect of the study carried out by Davis and his colleagues is that it explores how turning an experimental ‘knob’, such as confinement, can actually create new states. The ‘knobs’ turned in experimental physics typically include things such as pressure, temperature or magnetic field. Davis and his team, on the other hand, were able to control the physics of superfluid 3He using nanoscale confinement, which is a new practice in this area of research. There may be other systems in which confinement plays an important role and these could also be examined using similar techniques. “This is really only the beginning of this research project,” Davis added. “In our next studies, we really want to use our technique to study these domain walls in detail. I’d like to characterize them and understand exactly their form.” In their future work, the researchers plan to explore whether there may be some new physics within the domain walls. They would also like to ‘fingerprint’ the various states in their phase diagrams, in order to demonstrate that they are able to understand the properties of the phases they described in detail. “On my end superfluid 3He was also of interest as an example of topological phase of matter (my main area of research), which is believed to host exotic excitations known as Majorana fermions,” Joseph Maciejko, another researcher involved in the study, told Phys.org. “In terms of future research, the interplay of superfluid crystalline order and Majorana physics is something I am very interested in studying, and this should be experimentally accessible in this system.”