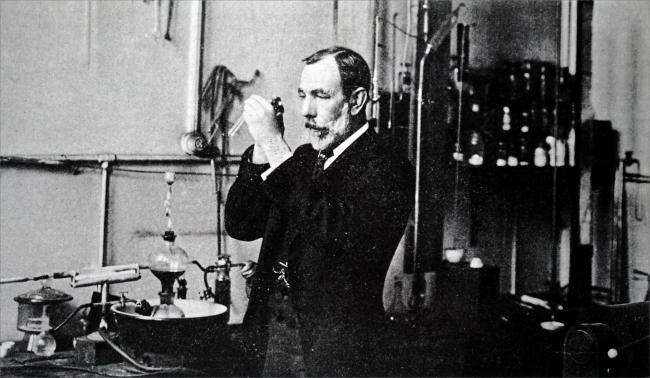 William Ramsay, a Scottish chemist who discovered the Nobel Gasses

KRYPTON, argon, neon and xenon – not so much the gases but the man who discovered them, Sir William Ramsay, a Nobel Prize-winning Scottish scientist, who was remembered in a Google Doodle yesterday, the day that would have been his 167th birthday. He was born in 1852 in Glasgow, the only child of a civil engineer who wanted to be a chemist from an early age. Although he studied at the University of Glasgow, he left without taking his degree and headed to Germany, which was a world leader in research. Ramsay studied at the University of Tubingen under Rudolf Fittig, an organic chemist, and received his doctorate in 1872. He came back to Glasgow to work at Anderson College and then Glasgow University and eventually became a professor at University College London, by which time his research focused on physical chemistry. In 1984 he started work on the research that would make him one of the country’s most famous chemists, the discovery of the noble gases – the most stable in the periodic table of elements.

How Did That Happen?

RAMSAY formed a collaboration with the physicist Lord Rayleigh after hearing one of his lectures. The air around us comprises several different gases, but mostly nitrogen gas and oxide, and by comparing their weight the pair found another, hitherto unknown element – argon – in 1894. It is a noble gas, which means it does not react with other elements, and the scientists went on to discover another, helium. Ramsay predicted other noble gases because of the positions of helium and argon in the periodic table and in 1898 he and chemist Morris Travers isolated neon, krypton and xenon from air which had been brought to a liquid state at low temperature and high pressure. He went on to work with Frederick Soddy, another chemist, in 1903, when he made a discovery of vital importance to our understanding of nuclear reactions. Ramsay showed that helium, and a gaseous release called radon, was produced continually during the radioactive decay of radium. Seven years later, using tiny samples of radon, he proved it was the sixth noble gas, along with further evidence that it was formed by the discharge of a helium nucleus from radium. Although this research showed the high degree of Ramsay’s experimental skills, it was his last notable contribution to science. He became intrigued by radiochemistry – then a new science that used radioactive isotopes to study properties and chemical reactions of non-radioactive isotopes. However, his attempts to further explore the field were unsuccessful.

Was This A Great Failure?

NOT really. Sometimes things turn out and sometimes they don’t. He referred to his work with Soddy on radium emanation in his Nobel lecture, when he said much work remained to be done. Ramsay worked with a colleague to map the spectrum of radium emanation, and added in his lecture: “But I am leaving the regions of fact, which are difficult to penetrate, but which bring in their train rich rewards, and entering the regions of speculation, where many roads lie open, but where a few lead to a definite goal.”

What About His Nobel Prize?

RAMSAY received his Nobel Prize in 1904, but his work also led to a large number of honorary memberships from institutions around the globe before his death in High Wycombe, Buckinghamshire, in 1916. They included: the Institut de France, the Royal Academies of Ireland, Berlin, Bohemia, The Netherlands, Rome, Petrograd, Turin, Romania, Vienna, Norway and Sweden; the Academies of Geneva, Frankfurt and Mexico; the German Chemical Society; the Académie de Médecine de Paris; the Pharmaceutical Society, and the Philosophical Societies of Manchester, Philadelphia and Rotterdam. There were many other medals and financial awards and, as well as honours in the UK, Ramsay was a Knight of the Prussian order “Pour le mérite”, a Commander of the Crown of Italy, and Officer of the Legion d’Honneur of France. In his Nobel lecture, he said his discoveries appeared to be “the result of causes only partially within my control”, and outlined how his family had influenced his career. “My grandfather on my father’s side, William Ramsay, was a chemical manufacturer in Glasgow … My mother’s father was a medical man, practising in Edinburgh. “He was the author of a series of textbooks for medical students … Hence, I inherited the taste for chemistry from my ancestors on both sides of the family.”