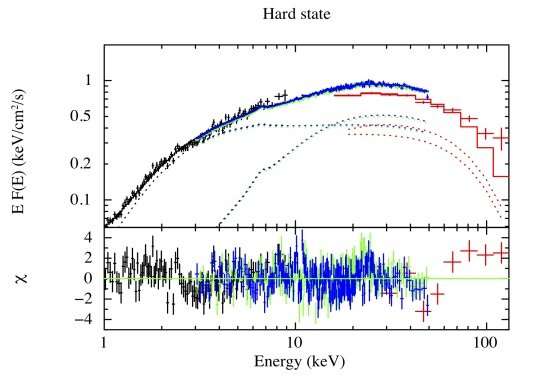 European astronomers have conducted a comprehensive study of a low-mass X-ray binary known as RX1804 (or 1RXS J180408.9–342058). The research allowed the scientists to unveil important insights into the nature of this mysterious object. The findings are detailed in a paper published September 23 on arXiv.org. Generally, X-ray binaries are composed of a normal star or a white dwarf transferring mass onto a compact neutron star or a black hole. Based on the mass of the companion star, astronomers divide them into low-mass X-ray binaries (LMXB) and high-mass X-ray binaries (HMXB). RX1804 was first identified by the ROSAT satellite in 1990 as an unclassified X-ray source. Further observations of this source resulted in classifying it as an LMXB with a neutron star showing a burst-only behavior due to very faint persistent luminosity. It was estimated then that the system is located not farther than 31,600 light years away. What puzzles astronomers is the fact that RX1804 exhibits X-ray activity at very different mass-accretion regimes, from very faint to almost the Eddington luminosity, on the timescale of years. Moreover, one study detected a helium emission line (He II) in the spectra of RX1804, which could possibly be related to a helium white dwarf nature of the companion in the system. This suggests that the object could be an ultra-compact X-ray binary (UCXB). To resolve these uncertainties, a team of astronomers led by Alessio Marino of University of Palermo, Italy, has performed a comprehensive X-ray study of RX1804 by analyzing the data from the Neil Gehrels Swift Observatory, Nuclear Spectroscopic Telescope Array (NuSTAR) spacecraft, and INTErnational Gamma-Ray Astrophysics Laboratory (INTEGRAL) space telescope. “In the present work, we used data from several X-ray telescopes, such as Swift/XRT, Swift/BAT and NuSTAR to study the evolution of the 2015 outburst and INTEGRAL/JEM-X, NuSTAR and Swift/XRT for the type-I X-ray bursts study,” the astronomers wrote in the paper. The researchers were able to distinguish hard and soft X-ray states in RX1804. Notably, the study has identified an intermediate state for the first time in this source. Such state is rarely observed in neutron star LMXBs. In the intermediate state, the arising of a hard tail above 30 keV was detected, modeled as a power law. This suggests that non-thermal processes are likely taking place during the state transition in RX1804. Additionally, a “clocked burster” behavior, with recurrence time of roughly 4,000 seconds, was also identified in this state. Moreover, in the hard state, the astronomers found that the results could be explained by a double-seeds Comptonization spectrum arising from the interaction of the spectra by two different photon sources with the same hot electron plasma. This indicates that RX1804 belongs to the so-called “two-photon” population of neutron star LMXBs. The researchers also estimated that RX1804 is located most likely some 32,600 light years away from our planet. Additionally, they excluded the possibility that the system could be a UCXB by analyzing the type-I X-ray bursts displayed from the source. “Their characteristics, combined with the clocked behavior observed during the intermediate state, point out H/He composition for the accreted material, which makes unlikely the helium dwarf nature for the companion,” the authors of the paper concluded.