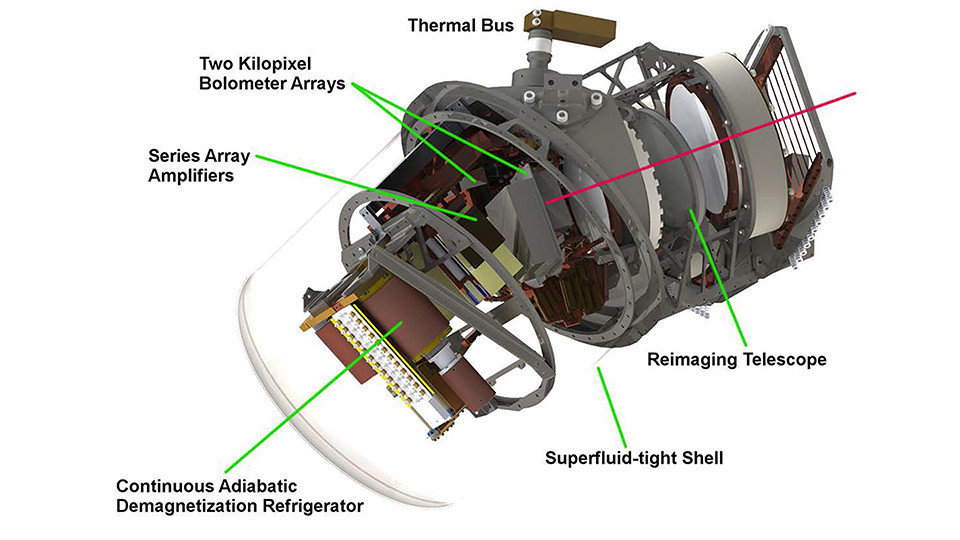 NASA’s Primordial Inflation Polarization Explorer (PIPER) is a balloon-borne observatory for measuring gravitational waves from the cosmic microwave background, evidence of the early universe’s rapid inflation. To achieve its required sensitivity to precisely measure variations in polarization across the sky, PIPER must be cooled to very low temperatures. A new paper by Switzer et al. describes the mechanisms used to maintain the cryogenic environment needed for PIPER operation. PIPER employs two kilopixel detector arrays enclosed in a superfluid-tight receiver, which resides with cryogenic telescope optics in a large liquid helium bucket dewar. A superfluid pump is used to deliver liquid helium to cool the optical systems, but this can only bring the temperature down to about 1.5 K. “To get the sensitivity needed, we need to cool the detectors to 100 mK,” said author Eric Switzer. To overcome this limitation, space systems have used adiabatic demagnetization refrigeration (ADR) methods to reach lower temperatures. But instead of a typical ADR process, PIPER utilizes a continuous ADR (CADR) that remains uninterrupted through the cooling cycle. The CADR is made up of four magnetic coils, each individually magnetized until they reach their maximum current, before demagnetizing adiabatically to their required operating temperature and providing isothermal cooling. This method offers a number of benefits over the ADR including reduction in mass, faster cycling and better control. Though a few mechanical issues remain that need to be addressed in the future, such as the need for a thicker shield to protect the CADR from Earth’s magnetic field, PIPER is expected to have its first science flight in October 2019.

This entry was posted in Helium application, New technology, Research. Bookmark the permalink.