From birthday parties to baby showers and the Macy’s Thanksgiving Day parade, balloons are a staple when it comes to party decor and celebrations. Created by British inventor Michael Faraday in 1824, rubber balloons were first manufactured in the United States in 1907. The rubber balloon was followed by the introduction of the twistable balloon animal in the late 1930s and shiny foil balloons in the 1970s. More recently, air-filled lettered and numbered balloons are making a big splash. While these trendy balloon displays look good on Instagram, there’s another reason party store retailers promote them. They don’t require a critical ingredient the world is running short on: helium.

Helium is far bigger than balloons

We all know helium’s use in balloons. Less well known are helium’s more serious roles in the functioning of an array of products including MRI machines, the processing of semiconductors chips, scuba tanks and even rocket engines. Liquid helium is inert and has the lowest boiling point of all liquid gasses, making it a critical ingredient for scientific experiments. Helium is so important it was listed as one of 35 mineral commodities deemed critical to the economic and national security of the United States. 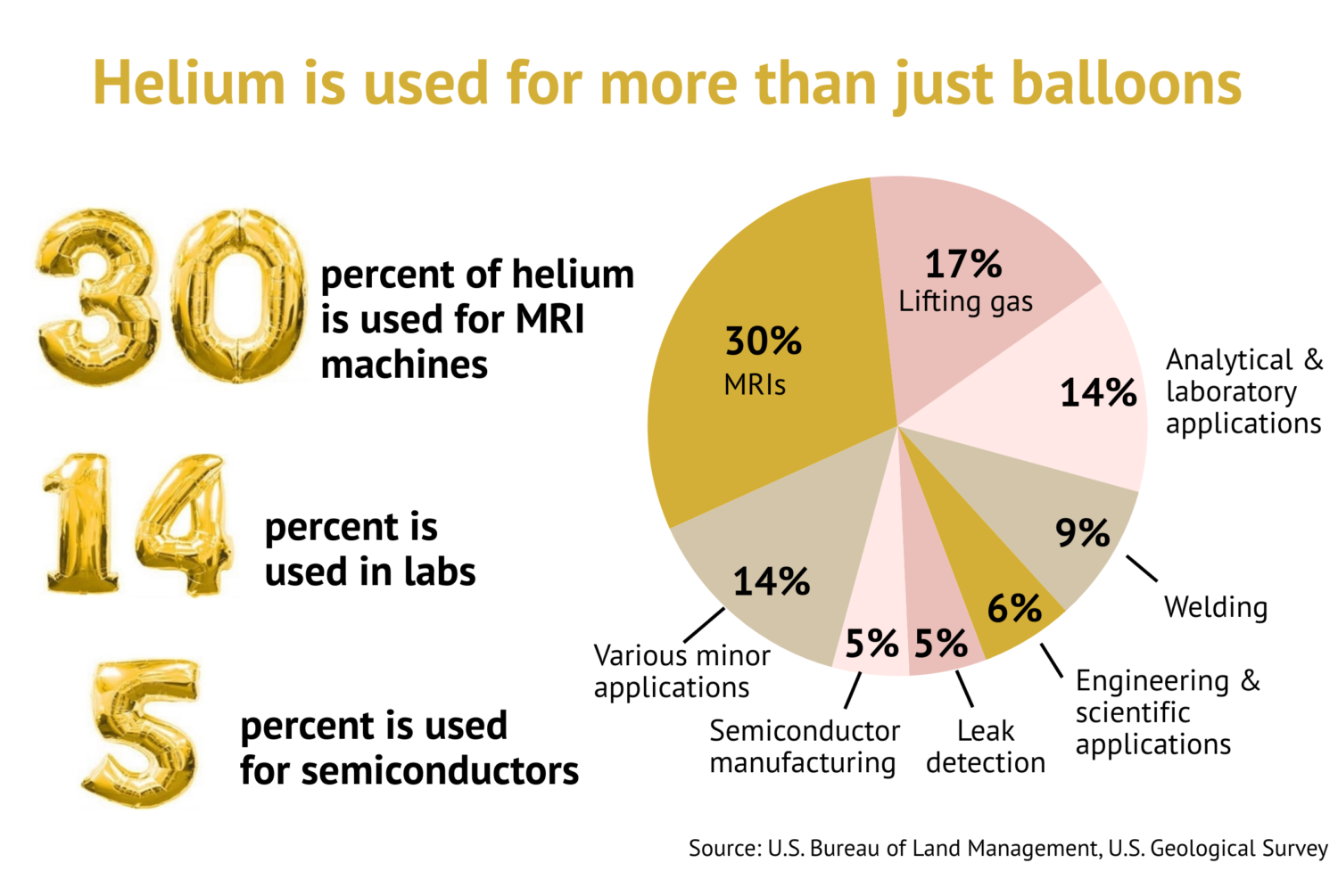 Helium is a bit of an enigma. Although it’s the second-most abundant element in the universe, helium is a finite resource on Earth — meaning it is non-renewable and we could run out of it someday. Helium is so light that is rises into space, so we can only recover it when it’s trapped in rocks below the earth’s crust where it mixes with natural gas. There’s only a tiny amount of helium found concentrated in natural gas fields (anything greater than 0.3 percent is considered good). Helium is extracted as a byproduct during natural gas production where crude helium is separated from natural gas using a cryogenic distillation method and then refined for commercial use. The liquid helium must be transported and shipped around the world in specially-designed International Organization for Standardization (ISO) tankers that are triple-walled and sealed.

The helium supply chain is concentrated primarily in three places. Seventy-five percent of the world’s helium comes from Texas, Wyoming and Qatar. The United States has been the world’s dominant producer of helium for nearly 100 years, starting with the launch of the Federal Helium Reserve (FHR) in 1925. The FHR is in charge of the conservation and sale of federally owned helium. The Bureau of Land Management manages a helium storage reservoir, an enrichment plant and pipeline system in Amarillo, Texas. The Amarillo plant alone has the capacity to provide 40 percent of U.S. domestic helium demand and 30 percent of global helium demand. But the U.S. government has been gradually selling off its helium supplies in Texas and will fully deplete its reserves by 2021. This plan started in 1996 with the Helium Privatization Act, which mandated that the U.S. government sell off its helium reserves by 2013 because the FHR had stockpiled over one billion cubic meters of helium and was $1.3 billion in debt. The original deadline was extended by the Helium Stewardship Act of 2013 which President Obama signed to stop the impending helium shortage and continue selling helium from the FHR until 2021. The HSA created an auction system to gradually auction off the FHR’s helium reserves to private bidders. The fifth and final auction was held last year. 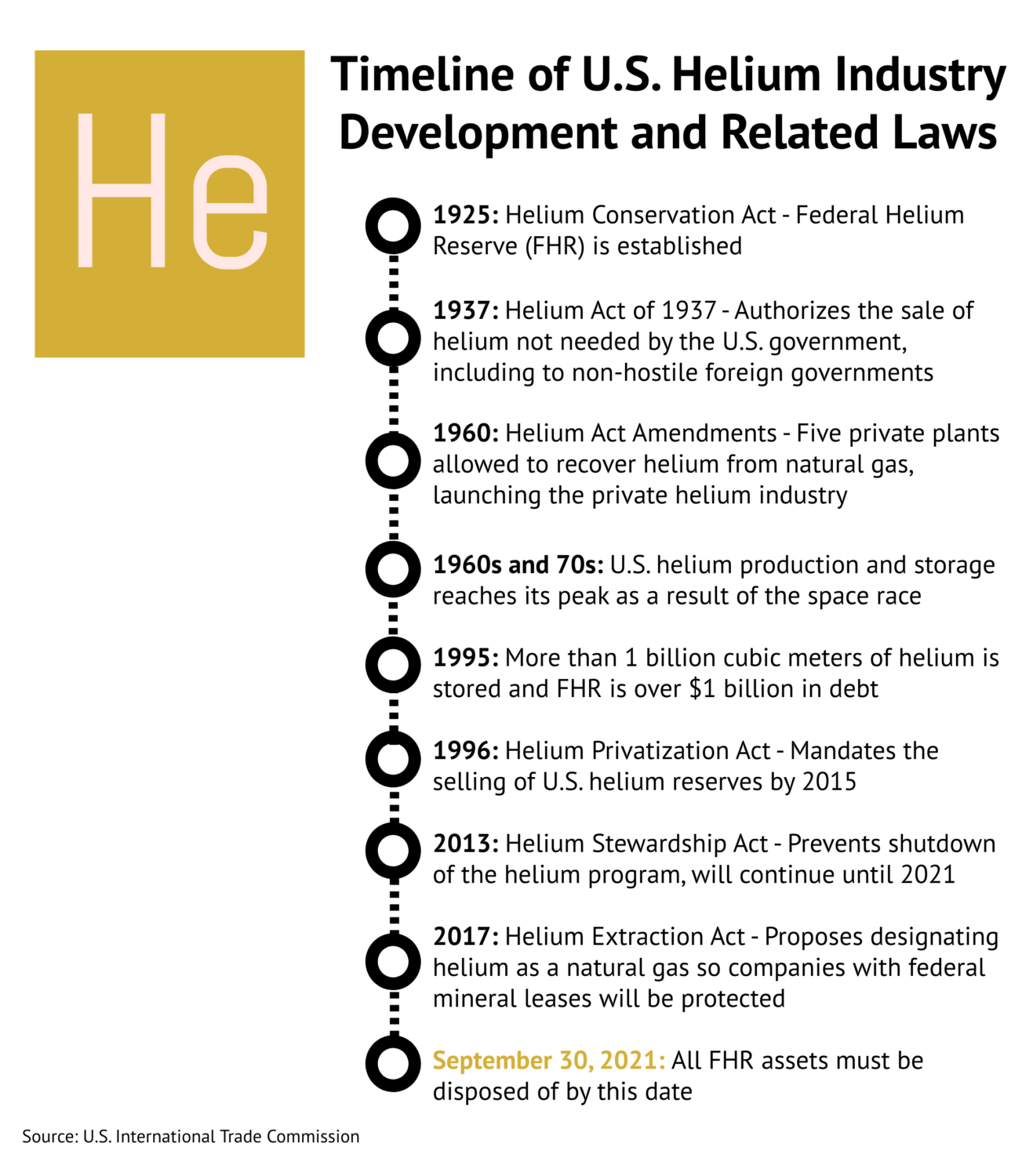 Global trade in helium
With the U.S. government exiting the helium business, one nation in particular has stepped in to supply the world’s helium: Qatar. Qatar is the world’s second-largest helium producer behind the United States, producing 28 percent of the world’s helium supply in 2018. Other countries that produce helium include Algeria, Australia, Canada, China, Poland and Russia.

Qatar is the top source for U.S. helium imports, supplying 80 percent of U.S. helium imports last year. But relying on Qatar for helium imports has its downsides. In 2017, the country was embargoed by four of its neighbors – Saudi Arabia, Egypt, Bahrain and the United Arab Emirates. Its helium plants were temporarily shuttered as a result and the world lost access to one-fourth of its helium supply overnight.Qatar’s helium plants have since come back online but the ongoing embargo calls into question the reliability of Qatar as a stable source of helium imports.

With all of the uncertainty in the helium supply chain and so few sources available, pricing has been volatile and shortages over the last ten years have been common. Party supply stores have taken a hit. Party City recently announced it was planning to close 45 stores this year and that helium shortages were negatively impacting balloon sales. Things may be looking up for the retailer which said they’ve secured a new helium source that should keep them afloat in the gas for the next 2.5 years. However, they do still recommend switching to air-filled party balloon displays due to the global helium shortage. While your party balloons may be safe for now, the long-term stability of trade in helium is still up in the air. The United States could soon go from helium exporter to importer as FHR reserves deflate. And prices are likely to increase until more helium sources come online in places like Russia, Canada and possibly even Tanzania to meet global demand. One thing is for sure, while party balloons may have short lifespan before deflating — MRIs, semiconductors and rockets are here to stay. A stable helium supply chain is the only way to keep the party going for our critical medical, scientific and defense fields.

This entry was posted in Helium production, Helium shortage. Bookmark the permalink.