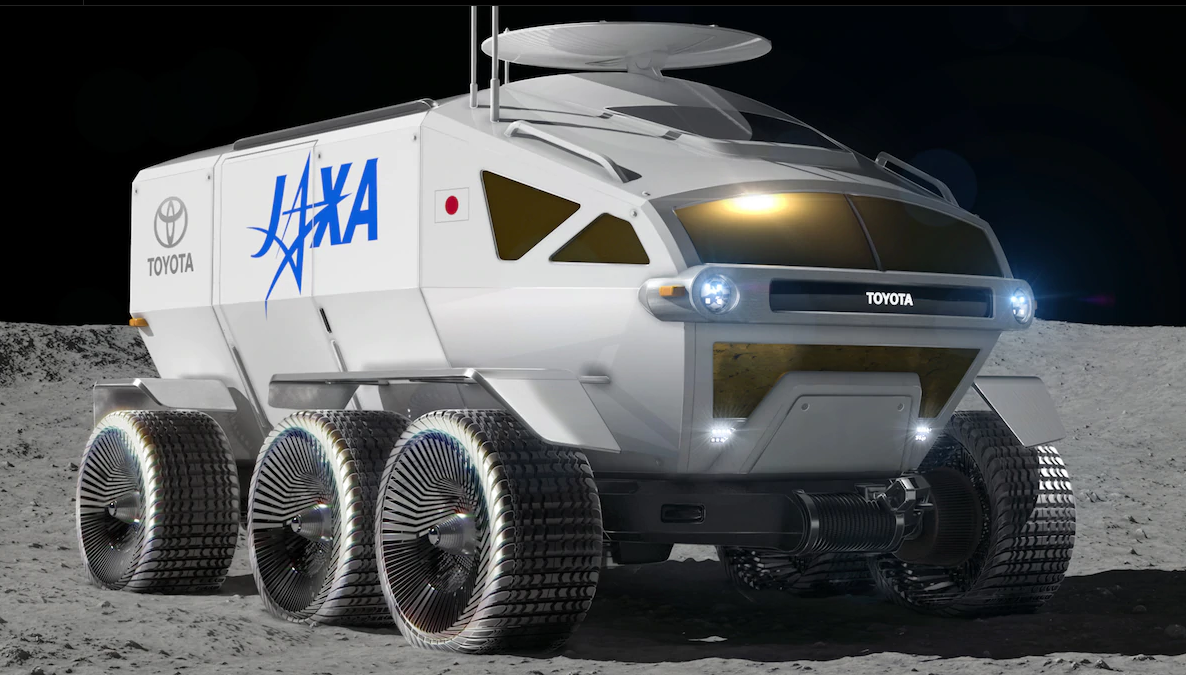 Have you been paying attention to the international moon race going on right now? I’d somehow missed the fact that countries ranging from India and Israel to China and Japan all have moon missions underway or imminent. Yep, Google Israel’s privately funded Beresheet mission, India’s Chandrayaan-2 (complete with lunar rover), and China’s Chang’e-4. That one’s Yutu-2 rover is currently prospecting on the back side of the moon in search of a helium-3 isotope that could potentially power fusion reactors and/or rockets required to reach Mars and beyond. The mission that caught my attention was Japan’s, because the Japanese Aerospace Exploration Agency (or JAXA, that nation’s NASA) has enlisted Toyota’s help to build a manned rover big enough to make roadkill of those Indian and Chinese Moon-bas (note: this is not its stated mission). Unlike the dune buggies GM helped engineer for NASA’s Apollo 15, 16, and 17 missions in 1971-72, Toyota’s rover will be a maxivan pressurized to allow two astronauts to work without space suits in between outdoor excursions. The six-wheel-drive EV utilizes in-wheel electric motors powered by a flexible roll-up photovoltaic solar array, a battery, and a fuel cell. That last item is both a Toyota strong suit and a lynchpin of the new rover’s mission. The farthest any NASA rover traveled on its silver-zinc potassium hydroxide battery was 22.3 miles, never venturing more than 3.1 miles (walking distance) from the lander. Toyota’s rover will spend six years traveling 6,200 miles in total (that’s roughly the equatorial circumference of the moon) supporting four manned missions. Powering the fuel cell will be two replaceable cartridge-tanks carrying 20 kg of hydrogen and 160 kg of oxygen—enough to power roughly 620 miles of presumably round-trip travel to and from a landing craft. I’d expect scheduling and routing to maximize time spent in the moon’s 14-Earth-day sunshine, when solar power contributes mightily to the rover’s life-support and propulsion needs. Toyota hasn’t disclosed power, acceleration, or top speed figures yet, but the record to beat is Eugene Cernan’s: 11.2 mph.