Focus: A Home For Helium Inside Earth 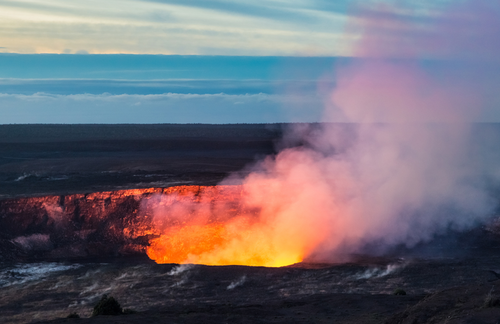 Hot helium mystery. Ancient helium can emerge from the ground along with lava (here from Kilauea Crater in Hawaii). Computational studies now show that the helium source could be the compound FeO2He in rocks close to the Earth’s core.

Computations predict the existence of a compound that could store the primordial helium that is known to be present somewhere inside the Earth.

Primordial helium—a remnant of the early Solar System—emanates from the ground at sites of lava plumes like those found in Hawaii, Iceland, and the Galapagos. But the source of this helium deep inside the Earth remains unknown. Now researchers predict the existence of a helium-bearing compound, FeO2HeFeO2He, that could serve to store this enigmatic element. Their calculations indicate that the compound is stable at temperatures and pressures consistent with those found at the bottom of the Earth’s mantle—the mostly-solid layer between the crust and the molten outer core. If verified, the results would support the science behind using helium to trace the age and history of cosmological bodies, since other similar planets should contain the same material. After hydrogen, helium is the most abundant element in the Universe, and on Earth, there are two places to find it. Helium is continuously produced through radioactive decays in the crust, and it is also found in lava and gas plumes originating from the mantle. This mantle helium bears signatures showing that it was present when the Earth formed. Researchers assume that it must exist somewhere in the Earth in solid form; otherwise it would have escaped long ago, thanks to helium’s low density. However, helium-bearing rocks are rare—the inert element has limited capabilities to form compounds with other elements. And so far, such compounds are absent from measurements and predictions of rocks, leaving the hypothesis unconfirmed. Yanming Ma of Jilin University in China and his colleagues set out to solve this conundrum by computationally searching for minerals containing iron and magnesium that might react with helium. Iron and magnesium are good starting points for such an investigation, as the elements are both abundant inside the Earth, says team member Changfeng Chen of the University of Nevada, Las Vegas. The team used a crystal structure search algorithm called CALYPSO—developed by Ma’s group—that finds compound candidates by calculating their energies. When the presence of helium in a candidate compound lowers the energy compared with the helium-free version, the helium-containing compound is considered “favorable,” and the algorithm spits out a proposed crystal. The algorithm’s search turned up empty-handed for magnesium-based compounds. But the team found one potential iron-based compound that fit their criteria—FeO2HeFeO2He. The team’s calculations show that FeO2HeFeO2He forms a stable structure at temperatures between 3000 and 5000 K and at pressures ranging from 135 to 300 gigapascals (GPa), conditions that correspond to those found at the core-mantle boundary. The team also carried out simulations of FeO2HeFeO2He at a temperature of 3000 K and a pressure of 135 GPa to find the material’s acoustic properties. They found that sound waves move through the compound at speeds equivalent to those obtained in seismic-wave measurements of the core-mantle boundary, indicating that the material’s properties are consistent with observations of this region. Recent synthesis experiments also point to FeO2HeFeO2He being a strong contender for housing primordial helium. Both FeO2FeO2 and the hydrogen-containing compounds FeO2HxFeO2Hx have been formed in laboratory settings at the temperatures and pressures found in the lower regions of the mantle. Chen says that the successful creation of those materials indicates that researchers could—relatively quickly and easily—confirm in the lab hat FeO2HeFeO2He is stable in deep Earth conditions. Helium-bearing compounds have, until very recently, been considered unlikely to exist under the physical conditions on or inside the Earth, Chen says, but in his opinion, his team’s new predictions change that view. Chen suggests that primordial helium reacted with FeO2FeO2 back when the Earth was new, forming a solid material. The compound is sufficiently heavy that it would only rise to the surface through so-called mantle plumes, which are columns of hot, solid rock that move up to the crust. When FeO2HeFeO2He nears the surface and experiences a drop in temperature and pressure, it should destabilize and release helium gas. If this result is correct, it could solve the problem of where and how primordial helium is stored, says Matt Jackson, a geochemist at the University of California, Santa Barbara. Jackson studies the chemical compositions of lava plumes and has found signatures of primordial helium. “This is an exciting result,” he says, but he cautions that the predictions need to be tested with laboratory experiments. Ronald Cohen, a geophysicist at the Carnegie Institution for Science in Washington, DC, agrees. He and others thought that primordial helium was most likely stored as impurities in mantle minerals, so the prediction of a helium-containing compound is a surprise, he says.

This research is published in Physical Review Letters.

This entry was posted in Helium exploration, Research. Bookmark the permalink.