How Long Does The Photoelectric Effect Take? 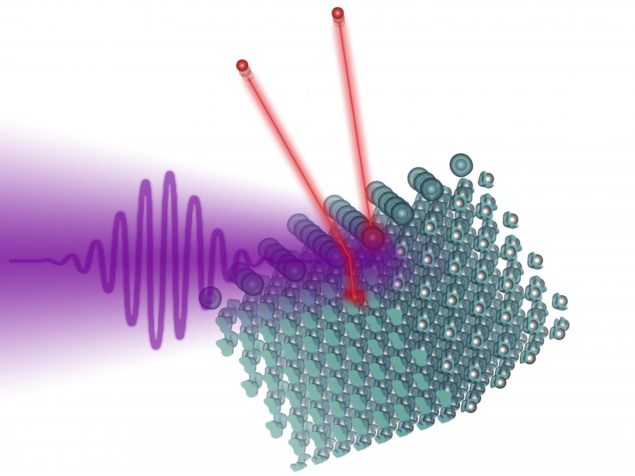 In a flash: artist’s impression of the photoelectric effect. (Courtesy: Technical University of Vienna)

Just 45 quintillionth of a second (45 attoseconds) is all it takes for a photon to liberate an electron from the surface of a metal. That is the conclusion of Joachim Burgdörfer from the Technical University of Vienna and colleagues, who have done a clever sequence of experiments to make the most precise measurement ever of the duration of photoelectric emission. Their technique promises to provide new information about how electrons behave in materials and could lead to improvements to photoelectric technologies, such as solar cells and optoelectronic telecoms components. Albert Einstein may be most famous for his theories of relativity, but he bagged the 1921 Nobel Prize for Physics for his work on the photoelectric effect. Einstein had worked out why light incident on the surface liberates electrons – but only if the frequency of the light is above a certain threshold. He explained this phenomenon by assuming that light exists as discrete particles (later called photons) in what an important early contribution to the development of quantum mechanics. As the photoelectric effect occurs so fast, physicists used to think the emission time is too short for them to measure with any precision. But thanks to the development of shorter and shorter laser pulses, they have been encouraged to try to measure the emission time using an “attosecond streak camera”. This involves firing two successive ultrashort laser pulses at a material, with the first ejecting an electron and the other accelerating it towards a detector. The problem with this technique is that, for most materials, it cannot determine the time it takes for one electron to be emitted, although if two electrons from different electronic states are liberated by the first pulse, the time delay between the emissions can be determined.

Burgdörfer and colleagues have now developed a new technique that uses iodine and helium atoms as “clocks” to measure the absolute time for electron emission from tungsten metal. The method involves depositing iodine atoms on a tungsten surface and using an attosecond streak camera to measure the delay between the emission of electrons from tungsten and emission of electrons from iodine. A second streak-camera measurement is then made on a gas containing iodine and helium – giving delay between electron emission from iodine and helium. Helium is used because it is a very simple atom, having just two electrons. This means that, unlike tungsten and iodine, the absolute emission time can be calculated from streak-camera data. Working back via the iodine measurements, the team calculate that tungsten emission times range from about 45 attoseconds for conduction electrons to about 100 attoseconds for electrons in the inner shells of the tungsten atom. Analysis of the times for several different electron states in tungsten, suggests that the emission process is more complicated than previously thought. “[The technique] gives us the opportunity to study important physical processes with an accuracy that would have been inconceivable a few years ago”, says Burgdörfer. “It is an exciting field of research that provides remarkable new insights – for example into surface physics, and into electron transport processes inside materials.”