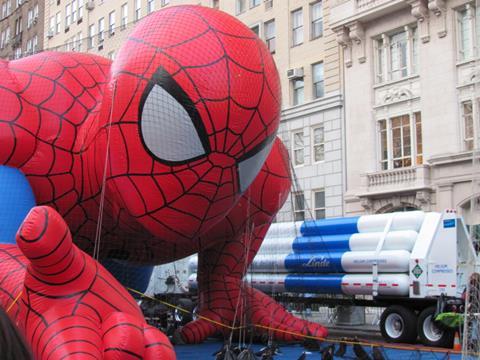 Linde will supply 300,000 cubic feet of helium to lift the balloons at Macy’s Thanksgiving Day Parade® in New York on 22nd November. It is the 24th year in a row the gas giant has supplied helium for the event that marks the official beginning of the holiday season.
This year’s Parade will feature 16 giant characters’ balloons and more than 35 legacy/novelty creations. “We’re thrilled to support and partner with Macy’s for this iconic event,” said Chris Ebeling, Vice President of Sales and Marketing at Linde. “To see people of all ages marveling at the balloons and sharing their delight continues to bring great happiness to everyone at Linde.” The helium that will fill the balloons begins its journey at Linde’s plant in Otis, Kansas, where it is purified and liquefied. It is then shipped to Bethlehem, Pennsylvania, where Linde operates a helium trans-fill facility. The liquefied helium is converted to a gas at Bethlehem and compressed into four high–pressure tube trailers that are trucked to New York City. The day before the Parade, staff of Linde and Macy’s will assemble near the Museum of Natural History where workers begin inflating the balloons using a gas-filling apparatus Linde has customised for the Parade. “Our collaboration with Linde has helped delight a generation, or two, of spectators. Every Thanksgiving, more than 3.5 million spectators lining the Parade route and more than 50 million watching on television marvel at our signature helium balloons as they soar above New York thanks to our long-standing partnership with Linde,” said Susan Tercero, executive producer of Macy’s Thanksgiving Day Parade.

This entry was posted in Helium application, Helium production. Bookmark the permalink.