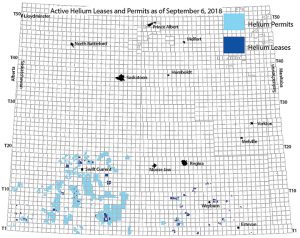 Alberta Energy regulators have confirmed there is no royalty charged on helium production, taking the air out concerns from local city officials that regulation is stifling the emerging industry in the province. The news comes just as U.S. officials announced auction prices for sales of that country’s strategic supply have more than doubled to nearly US$280 per 1,000-cubic-feet in the past year. All that said, the city is still not producing helium but is studying possible production levels from one of three wells drilled last year. If the well was in Alberta and if it moved to commercial production, the city would need to report volumes and sales, but for now, no royalties would be due. “There was some ambiguity about what a helium royalty would or wouldn’t be,” said Brad Maynes, the city’s petroleum production general manager. “It’s a clarification from them that we had been seeking. We hope the rate will be comparable to the Saskatchewan rate, which is very attractive and the reason, we believe, that there’s more activity in Saskatchewan.” Last fall, the city energy division announced it would begin targeted drilling for the industrial element in order to diversify income with test wells in both Saskatchewan, home to a small helium sector since the early 1960s, but also Alberta. Mayor Ted Clugston however, said he feared the gas could fall under royalty provisions for general natural gas, which has a royalty rate several times higher than Saskatchewan’s helium rate. Companies pay royalties on petroleum and coal in the province to account for the sale of the publicly owned resources.
Since helium had never been commercially produced in Alberta, there was never a need to consider or set a royalty rate, provincial officials said last winter. An information letter to producers on July 19 by the Alberta Energy Ministry states that since there is no reference price for the gas, “there is no applicable royalty payable on helium.” Beginning Sept. 1, operators were required to begin reporting production volumes and selling prices to the department. “Efforts to establish a royalty rate for helium products will be done with consideration for competitiveness with neighbouring jurisdictions,” the note concludes. The elusive gas collects in deep underground caverns, is extracted similar to conventional petroleum, and is increasingly used as a cooling in high-tech applications due to its stability and non-combustible nature. At least one City of Medicine Hat well thought to have helium potential was drilled recently in Alberta’s deep southern region, but administrators won’t disclose which of the three helium wells was successful. One positive well is still being tested. Officials with the Saskatchewan Geological survey confirm to the News there are 79 active permits and 90 leases covering helium exploration on just over 973,000 hectares. The total of 16 completed wells is an increase, and the department expects higher prices to drive further activity. This month, the U.S. Bureau of Land Management reported that the average auction price for helium deliveries from the U.S. federal strategic supply rose to US$279.95 per MCF. That’s compared to an average price in 2017 of US$119.31.