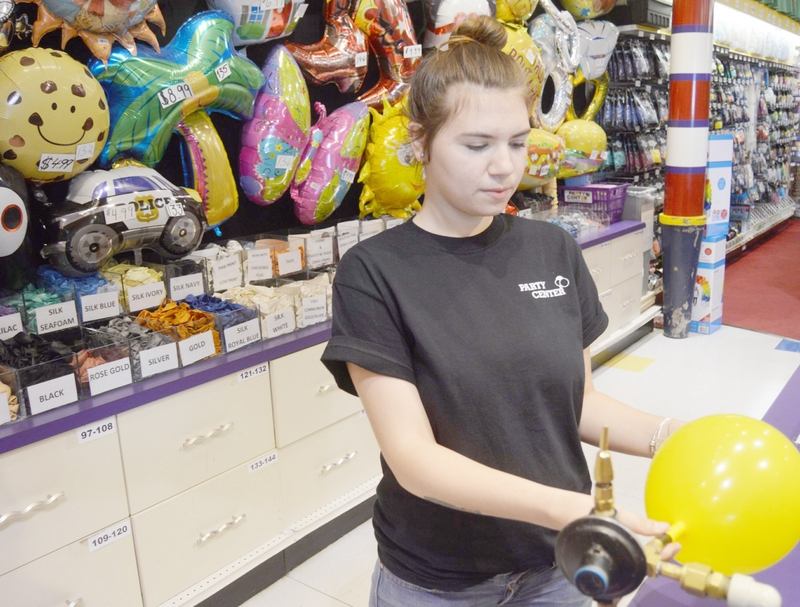 Destiny Stanley, a manager at Party Center, fills a latex balloon at the Salem store, which so far has had a steady flow of helium. (Jason Schreiber/Union Leader Correspondent)

A global helium shortage could blow up plans for balloon bouquets, but some New Hampshire party stores are crossing their fingers that it doesn’t pop a hole in their gas supply. “As long as it doesn’t happen during graduation then we’re OK,” said Patrick Gardner, assistant manager of Party Center in Salem. The impact of the shortage is being felt here, as some stores have temporarily run out of helium or limited the number of helium-filled balloons customers can purchase. It isn’t the first time that helium has been in short supply, but it’s a worry for party supply stores. They aren’t a priority like the medical industry, which uses helium to cool magnets in MRI machines, and the military, which relies on the gas for some equipment. Party Center has had a steady flow of helium from its supplier and so far has been able to keep up with balloon orders, Gardner said. On a busy Saturday, the store inflates anywhere between 50 to 70 dozen balloons. “We talked to our distributor and they said our stock could be cut in half, (but) they haven’t heard anything yet,” Gardner said. Party Center also sells small disposable helium tanks, but it’s been unable to get another shipment from its two suppliers. The store sold its last disposable tank last week and was told that it might not be able to get more until December or January. Some Party City stores have limited the number of balloons they’ll fill until their next shipment of helium arrives. Other store chains like Dollar Tree have also seen their supply evaporate for a period of time at some local stores in recent weeks. Dollar Tree spokesman Kayleigh M. Painter said the company hasn’t placed limits on the number of balloons that can be purchased. “We will replenish the helium as supplies become available,” she said. At Piece O’ Cake party shop in Somersworth, owner Alice Croteau said she’s been fortunate that her helium supply hasn’t been affected. “We’ve had customers coming in saying they can’t get balloons anywhere,” she said. Croteau said she’s been lucky during past shortages, but she knows she could get hit. “There’s always that chance that it could affect me eventually,” she said.