The BLM today auctioned off a total of 210 million cubic feet (MMscf) of crude helium, in 12 individual lots. There were five lots of 25 MMscf each, five lots of 15 MMscf each, and two lots of 5 MMscf each. Air Products dominated the auction for the second consecutive year, purchasing all 12 of the available lots for a weighted average price of $279.95/Mscf and providing total proceeds to the BLM of $58,790,000. Individual lot prices ranged from a low of $233/MCF to a high price of $337/MCF. The average price represents an increase of a whopping $160.64/Mscf, or 135%, from the average price of $119.31/Mscf that resulted from the FY 2018 auction. While Praxair and Matheson bid aggressively throughout the auction, it was clear from the start that Air Products’ bidders had instructions to not be outbid for any lot, at any price. But with three participants bidding aggressively, the lot prices reached much higher prices than anticipated. 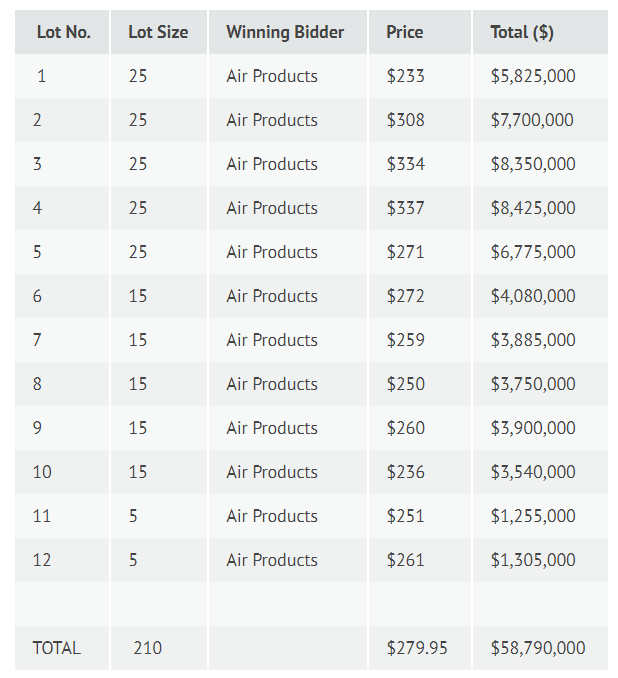 It is safe to say that the weighted average auction price far surpassed the expectations of both the BLM and the auction participants, and provided an unexpected windfall for the BLM. The major contributing factor to the high prices is the fact that the FY 2019 auction provided an opportunity for the helium refiners and other helium marketers to accumulate inventory for consumption during future years and to increase their crude helium allocation (and supply) for FY 2019.

Transitioning to life beyond the BLM

During a period of helium shortages in the market, the extra allocation is extremely valuable. For that reason, it can be said that the very high auction result is more reflective of the value of the allocations rights than the market value of crude helium itself. Another contributing factor to the auction result is that the BLM is expected to de-couple the auction price from the BLM’s Posted Price for crude helium, which is used as a pricing peg in many industry contracts, for the first time since its initial auction. The BLM will also be offering an additional 90 MMscf of crude helium for sale as part of its Conservation Helium Sale during early September, bringing the total volume of crude helium sales up to a total of 300 MMscf. Subsequent to the auction, the BLM announced that its Posted Price for FY 2019 would be $175/MCF. The $56/MCF increase in the BLM’s Posted Price from its previous level of $119/MCF will drive up cost significantly throughout the global helium supply chain. 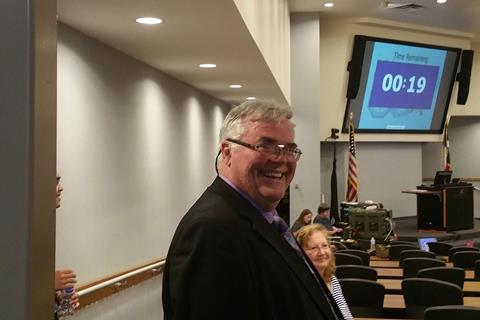 A happy Sam Burton, Director of the BLM’s Amarillo Field Office, after completion of the BLM Auction.

This entry was posted in Federal Helium Reserve. Bookmark the permalink.