Don’t Waste Your Helium, There Are Ways To Get More Out Of It.

That’s the message from Ability Engineering Technology (AET)’s President and CEO Eugene Botsoe and Commercial Business Leader Mike Maurisak. For the second time in 12 months, the industry is staring at the prospect of another global helium shortage. Back in early February, gasworld reported that helium markets were again experiencing tight supply conditions. Though premature to declare a shortage, and in the knowledge that helium market conditions might not even reach that point, gasworld understood that at least two of the major global helium suppliers were allocating supply in some geographic markets. Midway through 2018, and the market is once again in a precarious position. During the helium shortage of 2011 to 2013 (Helium Shortage 2.0), efforts were particularly focused on helium recovery and purification. With the market now heading in to an uncertain future in terms of supply, that emphasis on helium recovery and purification is likely to be re-doubled again in the years ahead. The advantages of helium recycling and purification are endless, and it could be argued, vital. Recovering and recycling helium helps to reduce the supply chain’s exposure to shortages, lessen the burden on production and alleviate possible supply disruptions. Fundamentally, helium recovery systems capture gas from waste helium streams, purify the helium, and then return the recovered gas back into the process. For more than 30 years, AET has provided helium recovery and purification systems and components to multiple industries including industrial bulk gas and scientific R&D applications. The Chicago-based company has standard models for high and low-pressure gas purification systems, as well as customised systems to meet specific client requirements. Gases currently purified include helium and hydrogen. There are plans underway to build systems for purifying argon gas. The multi-disciplined engineering and manufacturing company specialises in providing cryogenic and processing equipment, as well as machined parts used throughout the liquid-gas supply chain for the purification, liquefaction, distribution, storage and end-use of industrial gases and hydrocarbons. “The enquiries we are seeing here have been primarily driven by the same needs, which is as the price of helium continues to go up, you are looking at ways to recover to reduce the expenses,” Botsoe explained. “In the last three years, we have seen a steady increase in helium recovery and purification system enquiries from one to two per month to as many as five per month. The enquiries have come from industrial companies and government agencies, as well as academic institutions in the US, Canada and Asia.” “The reasons given for the increased enquiries include: market uncertainty as the US Bureau of Land Management’s (BLM) capacity declines, price pressure and on-going fears from supply chain disruptions as the demand and application of helium has continued to increase worldwide.” Maurisak (left) added, “We’ve had a US Department of Energy laboratory recently call us indicating their suppliers have just cut distribution amounts to them, and therefore they were interested in purchasing a helium purifier.” “During the same week, a Canadian University also called requesting a quotation for a helium purifier due to ongoing price increases.”

So, with a tightening helium market again, how has AET positioned itself to serve the market place? “Some of the steps we have taken include: more investment in R&D to simplify our equipment designs so we can respond faster to the market; expanded the number of models we now offer so we can service smaller and mid-sized end users; we have also improved our technology to allow our machines to operate with increasingly lower grades of helium gas, and we are evaluating the possibility for an equipment lease program,” Maurisak replied. “We’ve been seeing enquiries where we are asked to purify even lower grade helium than we typically would have had enquiries for in the past. Typically, in the past somebody might come and say ‘I have 99% pure helium can you get it up to five nines purity (99.999%)’.” “Now we get enquiries where somebody says ‘I have 90% pure helium, can you get it up to 99.995%.’ So, they are taking that lower grade helium and satisfying the need of their customers in higher purity, and increasing profits or savings.” Concluding, Botsoe said, “The current market conditions have created an opportunity for AET to increase its sale of helium recovery and purification systems. We have had to think differently about how we service our customers, what products to provide that meet their needs, and how best to standardise and modularise our designs so we can go to market faster.” ”Our engineering and manufacturing teams have stepped up to the challenge, and we feel confident that we are well positioned to support the new helium realities in the marketplace.” 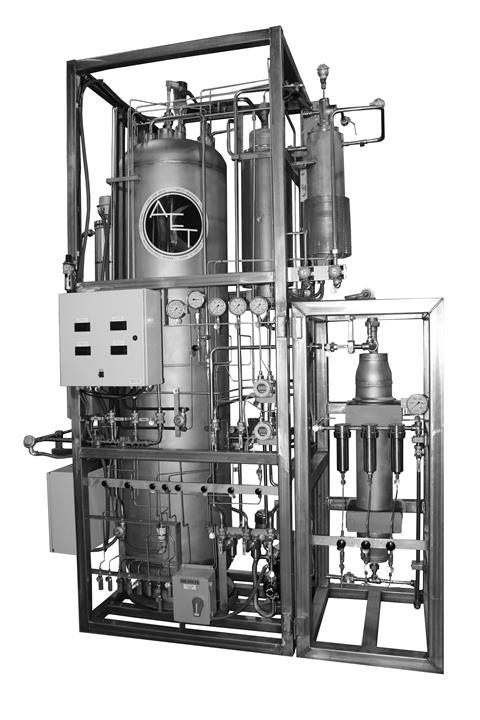