One of the world’s leading plasma research facilities just broke a new record, showing we really are getting closer to the wonderful goal of fusion power – a virtually limitless supply of clean energy.

Experiments on the Wendelstein 7-X stellarator – a device that uses magnets to confine clouds of plasma (hot, charged gas) – suggest its specific design could be the way to go, generating more power than any other machine of its kind. Wendelstein 7-X first fired up at the Max Planck Institute for Plasma Physics in late 2015, showing that, for about one tenth of a second, it could hold in place a loop of helium ions heated to a million degrees. That may not sound like much if we’re going to use this tech to produce energy, but bear with us. The machine was never intended to operate as a power station – it’s a test-bed for finding ways to squeeze as much as we can from nuclear fusion technology. And it’s doing a surprisingly fine job of it. In the latest tests, with 18 times more energy fed into the W 7-X than in previous tests, the ions of helium zipping through the plasma reached a sizzling 40 million degrees Kelvin – four times hotter than before. While most of us are familiar with typical nuclear energy – the decay of big atoms being used to generate electricity – fusion energy is released when atoms are instead welded together. Since it doesn’t produce the same kind of radiation woes that atom-splitting power creates, it’s the most promising energy source of the future. In fact, apart from the irradiated panels lining the inside of the reactor, fusion is as clean as power production gets. Fusion fuel is also in such vast supply that we might as well think of it as an unlimited power source, at least theoretically. But to get atoms to fuse, we need to give them a good, hard kick. Ideally, we’re talking in the vicinity of 100 million degrees of kicking, and this requires a specific type of machine. Right now, there are two promising types of those, and W 7-X represents one of them. Machines like MIT’s Alcator C-Mod tokamak use the electromagnetic fields generated by the resulting plasma to help keep the writhing jelly doughnut of charged particles in line. This keeps the hot cloud of slam-dancing particles nice and tight, generating impressive amounts of energy when fuel is injected. But it suffers from instabilities that make power production an all-too-brief affair. Meanwhile, stellarators like the W 7-X rely on banks of magnetic coils to contain the plasma, offering greater control that means that hot ring of helium jelly can keep swirling for longer periods. They don’t quite match the tokamak in terms of output, but the latest record-breaking feat looks like W 7-X’s 15 metre wide machine is showing us a way to bridge that gap. Recent rounds of experiments have also resulted in a leap in containment time, from a maximum of 6 seconds of comparable plasma generation to around 25 seconds. It’s not quite on the scale of hours yet, but it’s again a leap in the right direction. “This is an excellent value for a device of this size, achieved, moreover, under realistic conditions,” says physicist Thomas Sunn Pedersen from the Max Planck Institute. The improvements were in part due to the addition of a new type of interior cladding, shown below, which helps manage the flow of the plasma by diverting stray particles that affect the plasma flow. The next round of operations will focus on changes to this cladding pushing the plasma to even higher densities and temperatures. Analysis on the first round of experimentation in 2016 has also revealed the methods they’ve used to optimise the entire process have given the right results. “More exact and systematic evaluation will ensue in further experiments at much higher heating power and higher plasma pressure,” says the study’s first author Andreas Dinklage. This still doesn’t mean we can nail down a date for fusion. There are still plenty of wrinkles to iron out, and for all of their promise stellarators still have a way to go before they can break even and generate more than they produce. Then there is the question of fuel. The helium in the reactor is a product of hydrogen atoms fusing together. But it’s not just any hydrogen – a favoured variety called tritium isn’t found in significant reserves on Earth, so needs to be produced in a reactor or harvested elsewhere. Fusion remains just over the horizon for now. But results of experiments like these show that we’re heading towards that horizon at breakneck speed, so we’re right to feel cautiously optimistic here. This research was published in Nature. 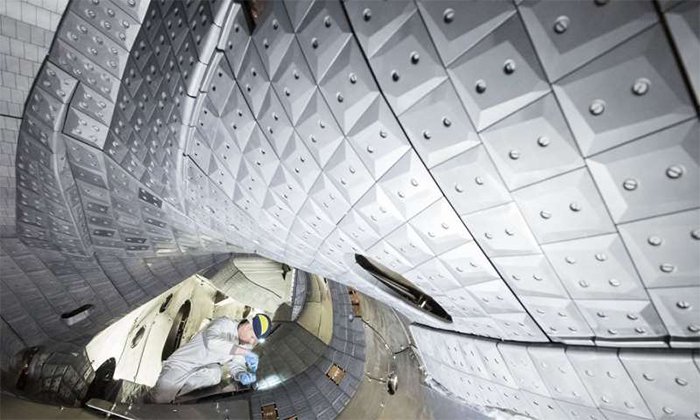