A Step Closer To Never-Ending Energy

Washington startup claims its radical ‘beam-target’ reactor could make fusion power a reality within the next few decade:

A nuclear experiment that borrows elements from existing designs to create a stable fusion reactor could make never-ending energy a reality within decades.
Washington startup, Agni Energym says its ‘beam-target’ reactor focuses and controls the elements needed to achieve nuclear fusion more efficiently than other designs. This approach, they say, should overcome the technical hurdles faced by their competitors, who have yet to unlock the ‘Holy Grail of energy production’. They believe their preliminary research shows that they will be the first to crack the process – far quicker than the 30 year time period predicted of other efforts. The reactor is the brainchild of 25-year-old Demitri Hopkins, chief scientific officer of the company, based in Olympia, Washington. Their device was first reported by Dr James Conca, an expert on energy, nuclear and dirty bombs, in Forbes. In devices that aim to achieve nuclear fusion, the process that powers the sun, two separate approaches have been taken. One aims to compress hot ions, electrically charged particles, heating them to extreme temperatures where fusion can occur. Another seeks to use magnetic fields to contain a hot plasma, a heated gas, which is kept stable long enough for fusion to happen. Both have their drawbacks, and the Agni device seeks to incorporate the best elements of both, by focusing a beam of ions onto a solid fuel target using both electric fields and magnetic fields. The design means that the ion beam has a short path to its target and doesn’t need to be controlled for long before fusion happens. The energy released, if successful, can then be used to generate electrical power. In a written statement, a spokesman for Agni Energy said: ‘AGNI is expected to achieve 16 million times the efficiency of coal, 10 times the efficiency of nuclear fission, produce no waste and zero emissions. ‘This is a paradigm shift in power.’ Nuclear fusion occurs when two light atoms overcome the barriers separating them to become one atom. They then release energy that was once used in binding them together into kinetic energy. This is emitted when the fused atom heats up and ejects a highly energised neutron. In the Agni Energy reactor, deuterium and helium-3 are injected into a chamber where they are ionized and accelerated into an ion beam. Magnetic focusing lenses serve to excite the ion beam and control it so it doesn’t stray off course on the way to the target. They also serve to periodically increase the density to induce ionic heating through deuterium-helium-3 fusion. This beam is fired at a target is made of Lithium BoroTritide and has the highest density of tritium by volume. Here the excited deuterium hits the target with a large amount of kinetic energy and fuses with tritium, creating a vast surplus of energy. The product of deuterium and tritium fusion is helium-4 and a neutron. In deuterium tritium fusion, as featured in the Agni Energy reactor, the atoms come together for a single instant as helium-5, before immediately decaying into the more stable helium-4 and a neutron. That neutron is very energetic, and can be captured in a medium like water, heating it to turn a turbine and generate electrical power. Helium-4 is a rare resource, one that does not stick around earth once in the atmosphere, and one needed for scientific equipment like MRI’s. The neutron is the main carrier of energy, holding 14.1 MeV’s of energy, that will be used to power a steam turbine, generating electricity. 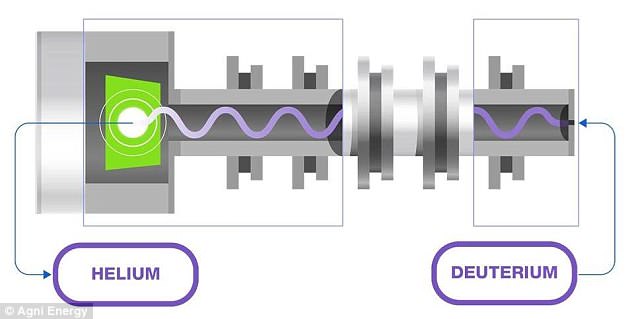 The Agni reactor is designed to overcome a number of problems with existing nuclear fusion reactor experiments. An ion beam of deuterium and helium-3 is shot into a Lithium BoroTritide target. Here atoms fuse together, releasing energy in the process 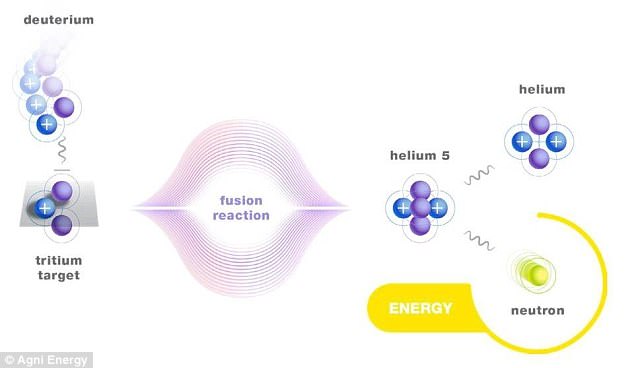 When two atoms become one, they release energy that was once ‘binding energy’ into kinetic energy. This is emitted when the fused atom heats up and ejects a highly energised neutron, whose heat can be used to turn a turbine and generate electricity