Venting About The Helium Market

The US Department of the Interior has identified a list of 35 “critical minerals,” which is “a mineral identified to be a non-fuel mineral or mineral material essential to the economic and national security of the United States, the supply chain of which is vulnerable to disruption, and that serves an essential function in the manufacturing of a product, the absence of which would have significant consequences for the economy or national security.” I’m constitutionally skeptical of such lists. It often seems that when supplies of a “critical” mineral decline and price rises, there is a short-term spike in articles talking about a “crisis.” But then the market responds to the higher price with a mixture of finding new sources, increased recycling, or finding ways to substitute for that mineral in a substantial number of uses. Life goes on. As one example, here’s my write-up of “The Rare Earths Shortage: A Crisis with a Supply and Demand Answer” (March 10, 2015). Yes, rare earths remain on this “critical minerals” list. Another entry on the critical minerals list is aluminum, and I have previously discussed “The National Security Argument for Steel and Aluminum Tariffs” (March 7, 2018). I can’t claim to have looked at all 35 items on the critical minerals list, but one that does perplex me is the quite peculiar market for helium. Stephen T. Anderson lays out the background in “Economics, Helium, and the U.S. Federal Helium Reserve:Summary and Outlook,” which appears in Natural Resources Research (December 5, 2017). Here is his quick summary of the peculiarities of the helium market from the abstract:
“In 2017, disruptions in the global supply of helium reminded consumers, distributors, and policy makers that the global helium supply chain lacks flexibility, and that attempts to increase production from the U.S. Federal Helium Reserve (the FHR) may not be able to compensate for the loss of one of the few major producers in the world. Issues with U.S. and global markets for helium include inelastic demand, economic availability of helium only as a byproduct, only 4–5 major producers, helium’s propensity to escape earth’s crust, an ongoing absence of storage facilities comparable to the FHR, and a lack of consequences for the venting of helium. The complex combination of these economic, physical, and regulatory issues is unique to helium, and determining helium’s practical availability goes far beyond estimating the technically accessible volume of underground resources.” These issues are not new. Back in 2008, for example, Science Daily was reporting “Helium Supplies Endangered, Threatening Science And Technology” (January 5, 2008). In 2010, Nobel prize-winner in physics Robert Richardson, who shared the prize “for their discovery of superfluidity in helium-3,” was giving speeches which ran under headlines like “The world is running out of helium: Nobel prize winner,” (Phys.org, August 24, 2010) In 2012, William J. Nuttall, Richard H. Clarke and Bartek A. Glowacki were discussing the problem in Nature magazine (“Resources: Stop squandering helium,” (May 31, 2012, pp. 573-575). Helium is trapped in certain (not all) natural gas fields, but natural gas is a $1 trillion per year industry and helium is a $1 billion per year industry. As a result, natural gas producers often ignore helium and let it vent away as a waste product. Once the helium is in the atmosphere, it isn’t recoverable at reasonable cost. They point out that, for a time, the US government was a main producer and consumer of helium. In the 1920s, the government designated a natural underground dome near Amarillo, Texas, as the site for a helium reserve. Starting in the 1960s, the US government greatly expanded the reserve. It provided some additional certainty in the market: helium producers knew that they had a place to sell, and helium consumers knew they had a place to buy. Nuttall, Clarke, and Glowacki provide this chart showing how helium production ramped up in the 1960s to fill the reserve. They also show in recwent years that the reserve is being drawn down in the aftermath of a 1996 law, which is why shipments have exceeded production in the last couple of decades. They argue that it is time for an international helium reserve. 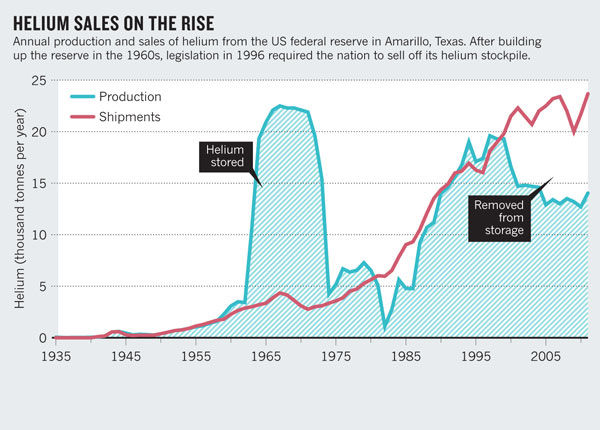 In July 2015, Wired magazine was pointing out that helium prices have been rising since 2000, and it was all the government’s fault for trying to sell off and privatize the helium reserve (The Feds Created a Helium Problem That’s Screwing Science,” by Sarah Zhang, July 15, 2015). However, less than a year later in July 2016, Wired was reporting “That Dire Helium Shortage? Vastly Inflated” (by Brendan Cole, June 29, 2016). Partly, this was because of a discovery of huge helium deposits in an area of Tanzania. In addition, the point is made that when helium prices rise, places where natural gas production is relatively rich in helium–like Qatar–will have an incentive to extract it.

Which sounded OK until July 2017, when as Steven Anderson note: “On June 5, 2017, neighboring countries initiated a trade embargo of Qatar, which had accounted for approximately 32% of the global helium supply prior to the blockade …” Overall, as Anderson notes: “Helium is an exhaustible natural resource for which there are limited or no substitutes including for its use as a coolant in military aircraft, certain types of nuclear reactors; the manufacture of optical fiber and semiconductors; providing low enough temperatures for superconducting magnets; enabling modern magnetic resonance imaging (MRI) technologies to operate; other cryogenic applications; and in other applications (Cai et al. 2012). Because of its unique properties, helium is expected to continue to be essential in enabling the development of such critical technologies in the future … “The American Physical Society and Materials Research Society (2011) recommended that the United States should maintain a nondefense stockpile of helium, but not of any of the 13 other energy critical elements (ECEs) that they identified. They suggested that helium is unique even in comparison with other ECEs, because it is unlikely that any economic source of helium besides natural gas will be found, helium is often vented into the atmosphere during the production and consumption of natural gas, and natural gas production (without separation of helium) and consumption is likely to continue to increase. Since then, natural gas production and consumption in the country has increased, but that has been mostly owing to increases in the production of shale gas, which may not have any significant helium content.” At present, US policy under the Helium Stewardship Act of 2013 is to sell the reserves, but as Anderson reviews the limited academic research, it’s clear that helium policy is on shaky ground. For example, it might make sense to allow the helium reserve to be privatized as a profit-making facility. It might make sense for the US government to hold a larger reserve. If it’s really difficult to find substitutes for helium, which seems possible, and if there cold be important and as-yet-discovered uses for helium in the future, we might wish to encourage natural gas producers to produce and save helium now, rather than being so quick to vent it into the air. The very limited number of US producers, and the fact that some of the main international producers are in not-always-reliable places like Russia and Qatar, complicates the issue. Orr perhaps we need to push research on finding cost-effective ways to extracting helium from the atmosphere, as a backstop if helium prices rise dramatically.
As Anderson notes, helium is a peculiar market where concentrated economic analysis might bring real insights. As the King says repeatedly in the old Rogers and Hammerstein musical, “The King and I”: “It’s a puzzlement.”