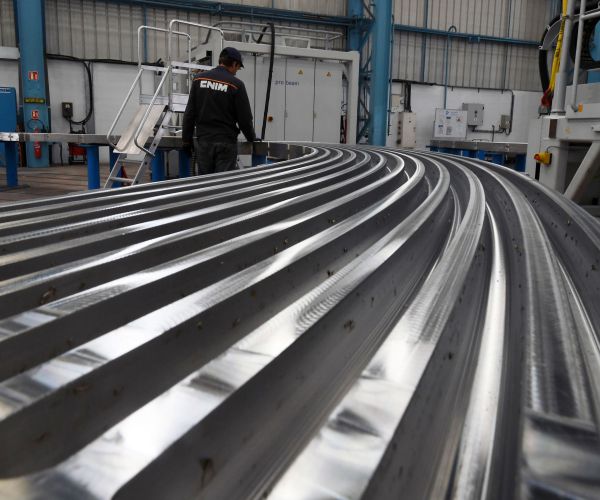 A technician works at the construction of a “radial-plate” used with supraconductors cables for ITER (International Thermonuclear Experimental Reactor), a multi-national nuclear fusion project, on October 14, 2016, at the industrial site of CNIM in la Seyne-Sur-Mer, southern France.

Last December Dr. Bernard Bigot, the Director-General of the International Thermonuclear Experimental Reactor (ITER) in France, declared the project 50 percent complete. This may be a watershed in the decades-long effort by all the major powers to get the first fusion reactor up and running. Futurists today — seemingly so certain of tomorrow’s energy needs relying upon wind, solar, and geothermal power — may be surprised by the actual events to come, taken unawares by a future moved forward not by sunlight, gusts of breezes, or steam pouring forth from geysers but by one of the most powerful forces in the cosmos: fusion. A fusion reactor would leave our current fission models in the dust, not unlike comparing a uranium fission bomb to the overwhelmingly explosive force of thermonuclear fusion devices such as the Soviet Union’s fifty-five megaton Tsar Bomba — over 4,000 times more powerful than the Little Boy bomb used over Hiroshima. Fission involves splitting an atom while fusion requires that two atoms be squeezed into one. In effect, a fusion reactor would be a mini-sun built here on Earth, turning isotopes of hydrogen into helium, creating blistering heat in the process, using that heat to flash water into steam to spin turbines that in turn would churn out vast amounts of electricity. There is just one small problem to solve in order to create a man-made star: mind-boggling heat is required. Atom smashers have recorded temperatures in the trillions of degrees — a quarter million times hotter than the center of the Sun — but only for infinitesimal durations and heating volumes smaller than an atom, useless for producing a single watt of electricity. A tokamak, however, is a machine built to really do the job and the progress being made here is simply astonishing. ITER, the world’s largest tokamak, will need to sustain temperatures on the order of 150 million degrees centigrade, holding the broiling plasma to be fused in the only way possible — by not actually allowing it to touch anything. Magnetic confinement is utilized to keep materials ten times hotter than the core of Sun within the “walls” of invisible magnetic fields. The hydrogen isotopes found in “heavy water” — deuterium and tritium — are the fuels for fusion reactors and are to be found in plain sea water all over the surface of the Earth. Once reactors are a reality, mankind’s energy larder could be as vast as the oceans from which heavy water will be extracted to power civilization. To be sure, inexpensive and profuse energy is a sure path to a more bountiful and more peaceful world; currently over half of the planet’s entire gross world product evaporates without electricity and that astounding figure can only be expected to rise in the future. ITER expects full power production sometime around 2035, and there are other consortiums working toward the same goal: Lockheed Martin in the United States, the Wendelstein 7-X fusion reactor in Germany, the United Kingdom’s ST40, etc. China is being drawn to the Moon in part by the lure of fusion reactors and a potential superior fuel for the process: helium-3. This isotope, delivered via the solar wind, is exceedingly rare on the Earth due to the planet’s magnetic shield which prevents it from being deposited on the surface. The Moon, however, possessing no such defense, has been bombarded by helium-3 nuclei stripped of their electrons for the last four billion years. The Chinese estimate that there’s around 1.2 million tons of the stuff infused into the first few centimeters of the lunar surface. Helium-3 comes into the picture for good reason. If helium-3 replaces one of the heavy water components — tritium — its fusion with deuterium might be more efficient, would generate no radiation, and most importantly should produce no radioactive waste materials. One can imagine the hosannas to be sung, and for good reason, should clean, abundant, cheap energy burst forth from fusion reactors with the good housekeeping seal attesting to all three. China is far along in its plans to establish a permanent base on the Moon in the near future. They’re not going simply to leave footprints and outdo a rival as with space races of prior eras. It should surprise few if the Chinese have a much more practical purpose in mind: surveying our satellite for the best areas in which to extract helium-3 and initiating mining operations at those sites. It may turn out that the greatest treasure ever discovered in history will cause the silver deposits of pre-Columbian South America, the gold rushes of California and the Klondike, and the diamond fields of South Africa and Canada to pale in comparison. It might be on the Moon where the most valuable mother lode is waiting to be tapped.