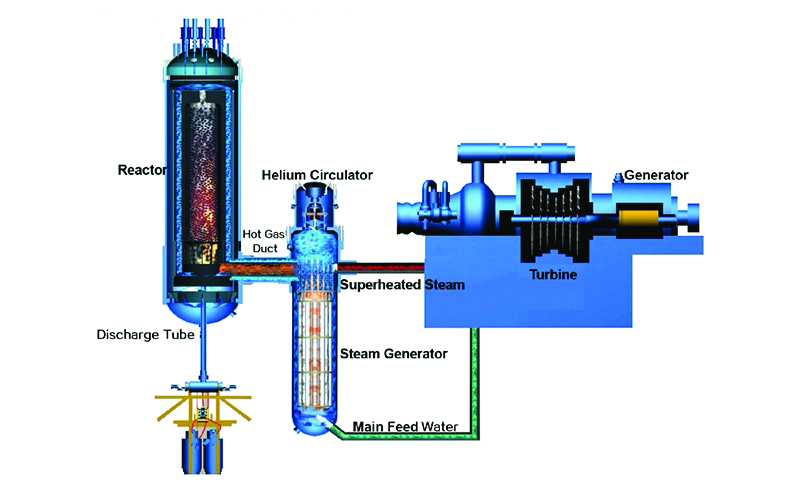 China’s State Nuclear Power Technology Corp. (SNPTC) has completed the installation of its high-temperature gas-cooled reactor (HTGR) project, the joint venture told the International Atomic Energy Agency (IAEA). The reactor uses helium as a coolant instead of water. After the helium is heated to 750C (1,382F), it is sent to a steam generator where it heats water until it becomes high-temperature steam. That steam then flows into a steam turbine to generate electricity. The process uses a graphite-moderated nuclear reactor and a once-through uranium fuel cycle. SNPTC’s project, which consists of two 250-MW high-temperature reactor pebble-bed modules (HTR-PM, Figure 4), is located in Shandong province. Tests at the project are expected to end in April 2018, at which time the reactor will go into commercial operation. “The success of this project will establish a milestone for the nuclear industry. It will pave the way for others,” said Mikhail Chudakov, IAEA deputy director general for nuclear energy, as reported by World Nuclear News. Construction began on the reactor on December 9, 2012. The project is a joint venture of China Nuclear Engineering and Construction Group (CNEC) and Tsinghua University, which teamed up in 2003 “to shoulder the special task of advancing the national science and technology project including scientific research of the HTR, the engineering research and demonstrative project investment construction,” according to CNEC. The technology was praised during a roundtable discussion held at the IAEA General Conference. “Unlike typical reactors, high-temperature reactors are particularly suitable to generate high-temperature process heat in addition to electricity. High-temperature heat from advanced nuclear reactors may be able to have a direct role in climate change mitigation as an alternative energy source for industrial processes,” an IAEA release says. CNEC highlighted some potential uses of HTGR technology. “HTR produces the superheated steam at [571C], which can be applied in not only high-efficiency power generation, but also petrochemical industry and heavy oil thermal recovery with the implementation of heat and power co-generation,” according to the group. Looking to the future, the development of very-high-temperature reactors (VHTRs) could expand the potential uses of the technology even further. “The steam outlet temperature can reach up to [1,000C] to form the clean heat source, which can be applied in steel making, coal gasification [and] liquefaction and thermochemical hydrogen production. VHTR with its extensive potential is expected to become one of [the] major high-temperature heat source suppliers in the hydrogen era with great prospect,” according to CNEC. CNEC is also currently working with Saudi Arabia on the early stages of an HTGR desalination joint venture. A memorandum of understanding (MOU) was signed August 24, 2017, by Zu Bin, deputy general manager of CNEC, and Prince Turki bin Saud bin Mohammed Al-Saud, chairman of the King Abdulaziz City for Science and Technology and chairman of the board of directors of Saudi Technology Development and Investment Co. “According to the MOU, the two parties will work together to carry out [a] feasibility study on developing seawater desalination projects using [HTGR] and start negotiations and preparations for the establishment of an HTGR desalination joint venture, so as to deepen the two countries’ cooperation in HTGR projects and pave the way for tapping into [the] nuclear desalination market of Saudi Arabia,” according to CNEC.