You may think of it as the gas in party balloons, but helium is one of the most valuable gases on Earth, with uses ranging from rocket fuel to MRI scanners. A large underground reserve of the precious gas was discovered in East Africa in 2016. And now new estimates suggest that there is at least twice as much helium in the reserve than previously thought. Researchers hope to start pumping the precious gas from the reserve by 2020. 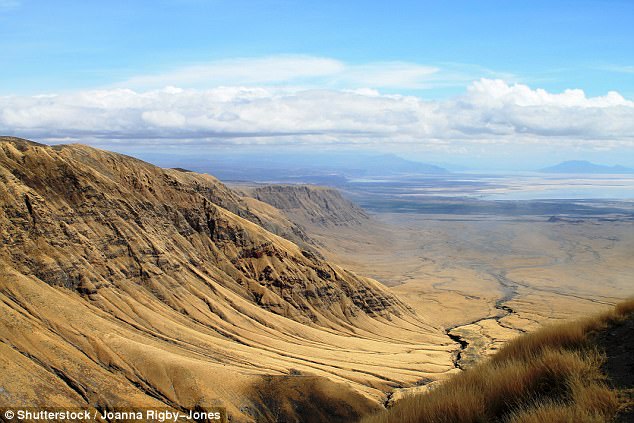 A large underground reserve of the precious gas was discovered in the Great Rift Valley in Tanzania (pictured) last year. And now new estimates suggest that there is at least twice as much helium in the reserve than previously thought

The reserve was discovered in the Great Rift Valley in Tanzania last year, and initial samples suggested that deposits contained around 2.6 per cent helium, mixed with nitrogen. Based on that estimate, experts from the US Geological Survey predicted that the reserve contained around 54 billion cubic feet (1.5 billion cubic meters) of helium – an amount described as ‘life-saving.’But new measurements by experts from Helium One, suggest that the deposits contain up to four times the concentrations of helium than previously predicted.
Speaking to Live Science, Thomas Abraham-James, CEO of Helium One, explained that the firm now believes that the Tanzanian reserve contains about 98.6 billion cubic feet (2.8 billion cubic meters) of helium. He said: ‘So it’s pretty much doubled in size.’ The researchers believe that the initial estimates were off because a small amount of air had diluted the samples in the laboratory. 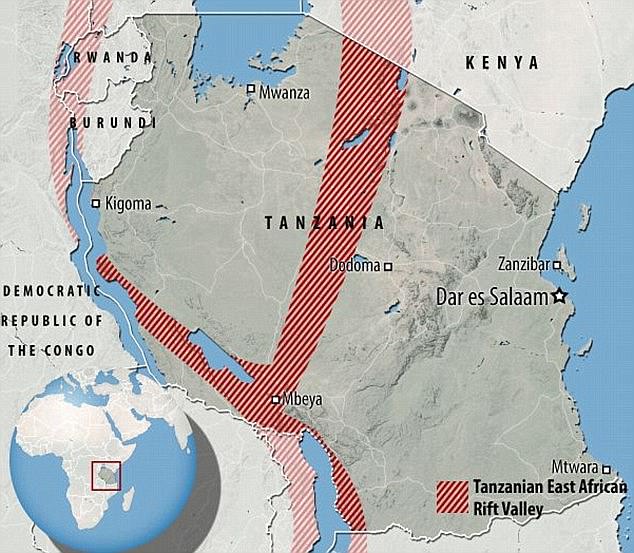 Within the Tanzanian East African Rift Valley, volcanoes have released helium from deep rocks and trapped it in shallower gas fields

To come up with the new estimate, Helium One enlisted the help of researchers from the University of Oxford, who took measurements at the site, rather than collecting samples to study later in the laboratory. Dr Peter Barry, who worked on the project, said: ‘We made probably 50 measurements out there in the field, and we saw up to four times as much helium in these samples.’So this was really exciting for us, because we were able to show quite convincingly that there’s a lot more helium than we originally assessed.’ Dr Abraham-James said: ‘We are probably still somewhat understating what is present, but nevertheless, that gives us room to update and improve as we progress.’ While helium is extremely valuable in a range of industries, the world faces a shortage of the non-renewable gas. The main source of helium for decades was from an underground reserve in Texas, but commercial supplies will be stopped from there in 2021, after the authority controlling it fell into debt. Another reserve in Qatar was also an important source of helium, but supplies ceased earlier this year after the closure of the country’s border with Saudi Arabia. Dr Abraham-James said: ‘The supply dynamics at the moment are very challenging, particularly with US output stopping in 2021, and Qatar, it’s fair to say, has its share of problems. ‘The world needs a reliable source of helium, so that we don’t see the fluctuations that we have in recent times.’ Helium One plans to begin drilling at the Tanzania reserve by July 2018. Dr Abraham-James added: ‘Probably by the end of 2020, people will start to be using Tanzanian helium.’

Helium, the second lightest element in the universe, is created by the slow radioactive decay of rock below the Earth’s surface. More than half the world’s supply is stored in the US National Helium Reserve in Texas.
But that supply is dwindling after the US passed a law in 1996 obliging it to sell off a certain volume of helium every year at a fixed price, in order to raise funds for the Government.in 2015, British Medical Association chair, Dr Mars Porter said it was ‘a tragedy’ to see the gas being sold off for party balloons.
‘I’m not a party pooper but this has gone too far, it is such a scant resource.’

WHAT CAN HELIUM BE USED FOR?

– Cooling medium for the Large Hadron Collider (LHC), MRI scanners and satellite instruments
– Because of its low density, helium is used to fill balloons, weather balloons and airships
– Because it is very unreactive, it is used to provide an inert protective atmosphere for making fibre optics
and semiconductors
– Helium is also used to detect leaks, such as in air-conditioning systems, and because it diffuses quickly it
is used to inflate car airbags after impact
– A mixture of 80 per cent helium and 20 per cent oxygen is used as an artificial atmosphere for deep-sea divers
and others working under pressurised conditions
– Helium-neon gas lasers are also used to scan barcodes in supermarket checkouts