The US Bureau of Land Management (BLM) held its FY 2018 Crude Helium Auction in Amarillo, Texas yesterday, the fourth crude helium auction conducted by the BLM since passage of the Helium Stewardship Act of 2013.

The FY 2018 auction was the penultimate crude helium auction by the BLM as the Federal Reserve of crude helium will reach the minimum level of 3 billion cubic feet mandated by the legislation after the FY 2019 auction and Conservation Helium Sale, at which time, no further sales of crude helium will be allowed to private industry. The BLM auctioned off a total of 500 million cubic feet (MMscf) of crude helium in 30 individual lots. There were 13 lots of 25 MMscf each, 9 lots of 15 MMscf each and 8 lots of 5 MMscf each. The overall result of the auction was that 500 MMscf of crude helium was sold for total proceeds to the BLM of $59,655,000, or an average price of $119.31/Mscf (thousand cubic feet). The average price represents an increase of $12.21/Mscf or 11.4% from the average price of $107.10/Mscf that resulted from the FY 2017 auction. A total of 6 companies successfully acquired crude helium during the auction, with Air Products dominating the auction with purchases of 385 MMscf. The remaining 5 successful bidders shared a total of 115 MMscf between them, with no one purchasing more than 30 MMscf. The table below summarizes the results of the auction. 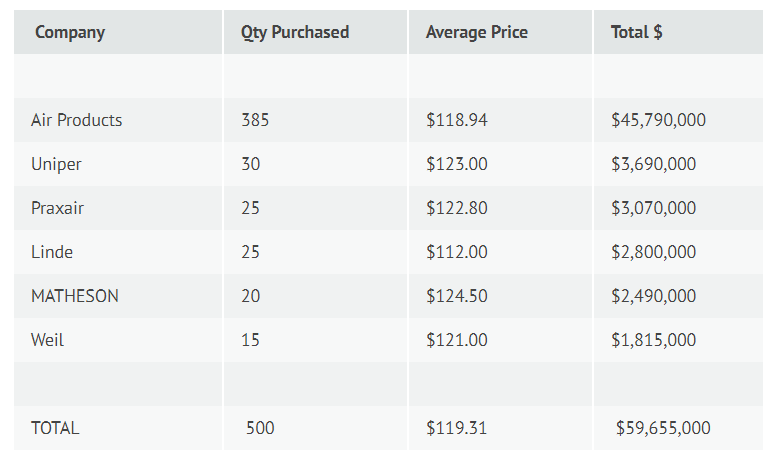 The BLM will also be offering an additional 400 MMscf of crude helium for sale as part of its Conservation Helium Sale during August, bringing the total volume of crude helium sales up to a potential total 900 MMscf. The BLM will only have about 400 MMscf of crude helium available for auction and sale in the BLM’s FY 2019 sales process. For that reason, the FY 2018 auction and sale are seen as the last good opportunity for the helium refiners and other helium marketers to accumulate inventory for consumption during future years. That is the likeliest explanation for the healthy 11.4% increase in the average auction price.