Helium Does More Than Float Balloons

Helium is a fun gas. It makes party balloons float and, when inhaled, will create a cartoon voice as the lighter-than-air gas vibrates vocal cords at a higher than normal frequency. Helium is used in many industrial processes, such as welding, and it is a vital component of scientific equipment, particularly equipment that must be chilled to almost absolute zero. Unfortunately, it seems that we might be starting to run out of the gas and that would be a problem for our technologically driven society. Helium is the lightest gas, except for hydrogen. It is also the second-most abundant element in the universe, representing almost a quarter of all the mass in the universe. Most helium was created billions of years ago during the first few seconds of the Big Bang. Since then most helium is produced in the hot interior of stars – in fact, that was where we first discovered the element, in the spectrum of the sun. Since Helios was the name of the Greek god of the sun, the element was named helium. Helium was finally discovered in the United States in natural gas wells where it was classified as a strategic material and exports were restricted. It is this terrestrial supply that is running short. As an interesting historical footnote, the German airship Hindenburg, which destroyed in a hydrogen explosion on May 6 1937, was designed to use helium but they could not get supplies of the gas from the United States, the only supplier at the time. Flammable hydrogen was used instead of the inert helium. The Hidenburg disaster virtually doomed the development of lighter-than-air craft for the next 50 years. Helium has some interesting properties. It is colourless, odourless and cannot be tasted. It is one of the so-called Noble gases as it is reluctant to enter into reactions with any other chemical. This gives it useful properties in welding. Helium acts as a shield gas to keep the more reactive oxygen in the air from contaminating the weld. This makes for stronger cleaner welds. Helium also is used in the production of silicon chips for computers and electronics. Most new helium is produced by nuclear fusion in stars where four hydrogen atoms come together at high temperatures and pressures. This transformation is the source for the energy the sun emits as some of the mass of the hydrogen is converted into energy at the sun’s core. However, there is another source of helium — nuclear fission. This is the process where radioactive elements, such as uranium, split into lighter elements. Helium is one of the byproducts of that reaction. This is the source of most of the terrestrial sources of gas. Uranium breaks down and the helium gas is trapped in rock formations waiting to be released when the rock is fractured. It is often found in company with natural gas and is the source of most of the commercial supplies of helium. As an element, helium also has some interesting properties. It is the only element that will never freeze solid. Its liquid point is only about 1.5 degrees above absolute zero — minus-273 C. In this state, it is what is called a superfluid as it has no measurable viscosity. Honey has a higher viscosity than water for example. Liquid helium has no viscosity and, if left in a container, will climb the walls and spill over the side. In science, helium’s biggest use is to keep electrical circuits cold to support the property of superconductivity. This is a state where all electrical resistance goes to zero in a conductor and you can keep an electrical current going for years in a loop of wire. It is used at CERN in Europe to cool the magnetic coils that have tremendous currents running through them that would vaporize the copper wires in the coils if they had any electrical resistance. The problem is that the world is starting to run out of helium. Wells that produced abundant helium are starting to run out of the gas. Other sources have little commercial quantities of the gas and it might start to be difficult to acquire unless something is done. We have a few years before a helium shortage becomes critical, but we should start by finding a substitute for balloons at birthday parties – unless we want to lose our ability to make new computer chips or scientific discoveries at the smallest scales. 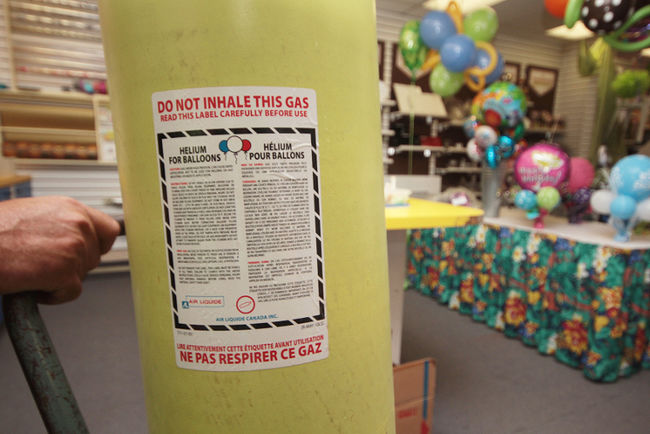