There Goes The Helium Balloon 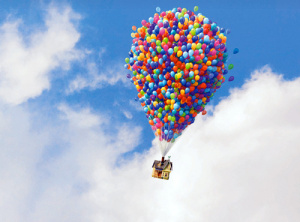 The helium balloon, it turns out, makes a rather striking symbol of our attitude to the earth’s finite resources.

In the movie Up, an old man ties thousands of balloons to his house and floats away in search of the legendary Paradise Valley. This is not a good idea in real life, and not just because you’d be a danger to aviation. You’d also be consuming a vast quantity of helium, and this would make Peter Wothers of Cambridge University rather cross. “The scarcity of helium is a really serious issue” he says. “I can imagine that in 50 years’ time our children will be saying ‘I can’t believe they used such a precious material to fill balloons’.” Helium is abundant in the universe, but scarce on earth. It forms during the radioactive decay of rocks, but most of it then floats up and leaves the earth’s atmosphere. What remains is trapped in natural gas and can be extracted with it, but usually in small concentrations. Since we can’t currently make it artificially, it is essentially a finite resource. Helium is stable at extreme temperatures and has some important uses, most notably for cooling the superconductor magnets in MRI scanners. It is also used in cryogenics, welding, and various technical process such as gas chromatography. About 10% of the world’s helium goes into airships and party balloons – too much, according to scientists and doctors who’d rather it was saved for more important things. We’re 30 – 50 years away from running out of helium, but supply is already unpredictable and has disrupted research. To make matters more complicated, the US has been selling off its national reserves of helium and confusing the market. The national helium reserve began in the 1920s to safeguard supplies for airships. Its strategic importance didn’t last long, but the stockpiling continued regardless, and the plant in Amarillo eventually held a billion cubic metres of helium. Having accumulated most of the world’s helium with no particular purpose for it, in 1996 the US government decided that it should gradually sell it off. Unfortunately it opted to do so at a below-market fixed price, and it’s that low price that has confused matters. It doesn’t reflect the rarity of helium or the speed of depletion, but it has quashed any incentive to try and increase production or innovate around alternatives for the gas. The fixed price will run until 2015, and hopefully future reserve sales will be priced to reflect the realities of helium depletion. Some scientists would like to see more robust action and are calling for a ban on helium sales to the general public, making sure that what remains of the earth’s helium stocks is used for medical and scientific purposes. Whether they’ll get the ban remains to be seen, but it’s something for us to consider the next time we’re at a fairground, confronted with a bouquet of bobbing Mickey-Mouse heads. The helium balloon, it turns out, makes a rather striking symbol of our attitude to the earth’s finite resources.