The global helium market suffered under massive supply constraints during 2011–13, which caused severe shortages and greatly reduced demand as consumers started to either substitute or recycle helium. The situation improved toward the end of 2013, when the Qatar Helium II project came onstream midyear, but swung quickly into oversupply with additional capacity from the expansions in Algeria and the United States at the end of 2013 and in 2014. During the shortage, long-term contracts were fulfilled on 70–80% allocation only, with strategic applications, such as magnetic resonance imaging (MRI) and nuclear magnetic resonance (NMR), given priority. Because of the tight supply and even supply interruptions, helium end users started to look at substituting helium with another gas (e.g., with hydrogen in gas chromatography) or recovering and recycling helium. With new plants coming onstream in Algeria, Qatar, and the United States, and with the demand-destroying shortage, the helium market quickly became saturated. Prices declined significantly as a result of the increased supplies as several refined helium producers experienced problems finding a market to meet their take-or-pay commitments. The following pie chart shows world consumption of helium: 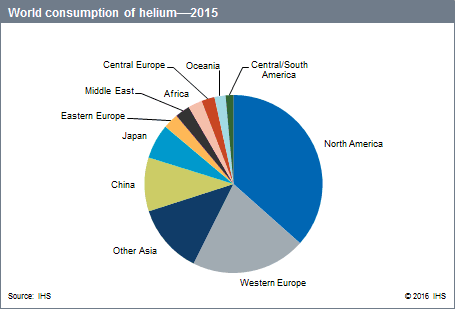 Helium is an inert gas and the lightest of all gases except hydrogen. Helium is produced in the natural environment continually by the radioactive decay of uranium and escapes into the atmosphere. Since the concentration of helium in air is very minimal, extraction of helium from air is not economically viable. Helium is typically extracted from helium-bearing natural gas. It is also extracted from the vent gases from some liquefied natural gas (LNG) processing plants. The entire global helium supply depends on roughly 20 liquefaction plants, located in the United States, Poland, Russia, Algeria, Qatar, China, and Australia. The United States is still the major producer, but most new sources are developing elsewhere. The bulk of US production is related to the BLM (Bureau of Land Management), which manages the world’s largest helium reserve. In recent years, BLM-related production has diminished considerably. Helium is a global product in tight supply and any disruptions create shortages and dislocation. Growth in the global demand for helium is driven by rising demand for MRI, along with growth in the electronics, semiconductor, LCD, and fiber optic industries, which are centered in China, India, South Korea, Taiwan, and the Middle East. Up to 20% of global helium demand is estimated to come from the manufacture and operation of MRI scanners alone. In 2015, an estimated 25–30% of global helium was consumed in liquid form, with this share being higher in developed regions. In the major consuming regions—the United States, Western Europe, Japan, China, and Other Asia—MRI was the largest application for helium in 2015, accounting for almost 19% of total consumption, followed by semiconductors/electronics, welding cover gas, and fiber optics. Demand for liquid helium grew particularly rapidly in the late 1980s and the 1990s, primarily as a result of demand for use in MRI and NMR machines. During operation, MRI scanners require liquid helium to cool their superconductive magnet coils to a temperature that can be reached only with helium.
Because of its extremely low boiling point, helium is the medium of choice for cryogenic experiments. For current commercially available superconducting magnets, helium is the only material available to maintain the low temperature necessary for generating the superconducting effect. Applications for helium-cooled superconducting magnets include particle physics research facilities, such as Fermi National Accelerator Laboratory’s Tevatron/Tevatron I particle accelerator, Brookhaven National lab, Los Alamos National Lab, Thomas Jefferson National Accelerator Facility, and Argonne National Laboratory’s magnetohydrodynamic propulsion system. Several Western European particle accelerator systems use helium, including the Large Hadron Collider at CERN in Switzerland. Current research is under way to use supercooled helium for improved global positioning systems (GPS) in submarines and airplanes. The study, funded by NASA and the National Science Foundation, examines helium-4 that is cooled to nearly absolute zero, when helium becomes a frictionless fluid and produces a whistling sound. That property can be used in making sensitive gyroscopes that enable better navigation. One of the largest uses for gaseous helium is in welding, where it provides an inert gas shield to protect the weld zone from the atmosphere. The two major welding processes that use helium are gas tungsten arc welding (GTAW) and gas metal arc welding (GMAW). The semiconductor and electronics industry is a significant consumer of helium. Demand growth has been driven mainly by the emergence of larger-diameter silicon wafers. As the electronics industry is now preparing for the 450-millimeter-diameter wafer, it is expected that the electronics industry will use considerably more helium to satisfy its cooling needs. Helium-3 is used for constructing neutron detectors. By some estimates, around 70 liters of helium-3 can be used per detector. In recent years, various governments have built a significant number of neutron detectors, mostly for security issues. Demand for this application has increased by at least an order of magnitude since the mid-2000s. The future growth of helium is expected to be driven by demand from electronics manufacturers in China, South Korea, and Taiwan. Semiconductor manufacturing, flat-panel display manufacturing, and optical fiber manufacturing are all significant consumers of helium in Asian markets. While worldwide demand is expected to grow only 2.0% per year, demand in these countries is expected to grow close to double that rate. With high-tech manufacturing shifting to Asian countries, the US and Western European share of worldwide demand is expected to continue to decline.