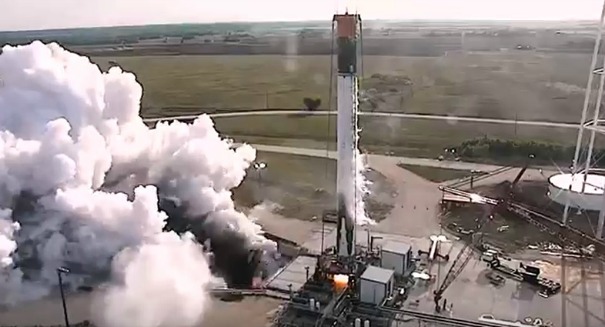 A massive explosion back on Sept. 1 is causing a lot of worry among NASA officials about SpaceX’s weird way of fueling up.

NASA is raising some major questions about SpaceX, specifically how it goes about fueling procedures in light of the catastrophic Sept. 1 launchpad explosion. A NASA advisory committee has issued stronger warnings about how SpaceX fuels rockets that will eventually be carrying humans on board. SpaceX wants to take astronauts from Earth to the International Space Station on the Crew Dragon spacecraft, but it plans to do so in a most unusual way: by fueling the spacecraft with humans on board. Basically, the company uses chilled liquid oxygen to fit more fuel in the tank and take more weight into orbit, but it requires that the spacecraft be fueled immediately before launch so the fuel doesnt warm up. SpaceX says it’s a tried and true process, but NASA is clearly concerned about this departure from the norm. “There will be continued work ahead to show that all of these controls are in place for crewed operations and that the verifications meet NASA requirements,” SpaceX said in a statement. “These analyses and controls will be carefully evaluated in light of all data and corrective actions resulting from the anomaly investigation.” “The Accident Investigation Team continues to make progress in examining the anomaly on September 1 that led to the loss of a Falcon 9 and its payload at Launch Complex 40 (LC-40), Cape Canaveral Air Force Station, Florida,” SpaceX said in an Oct. 28 update. “Since the incident, investigators from SpaceX, the FAA, NASA, the US Air Force and industry experts have been working methodically through an extensive fault tree to investigate all plausible causes. As part of this, we have conducted tests at our facility in McGregor, Texas, attempting to replicate as closely as possible the conditions that may have led to the mishap. “The investigation team has made significant progress on the fault tree,” the statement continues. “Previously, we announced the investigation was focusing on a breach in the cryogenic helium system of the second stage liquid oxygen tank. The root cause of the breach has not yet been confirmed, but attention has continued to narrow to one of the three composite overwrapped pressure vessels (COPVs) inside the LOX tank. Through extensive testing in Texas, SpaceX has shown that it can re-create a COPV failure entirely through helium loading conditions. These conditions are mainly affected by the temperature and pressure of the helium being loaded.”