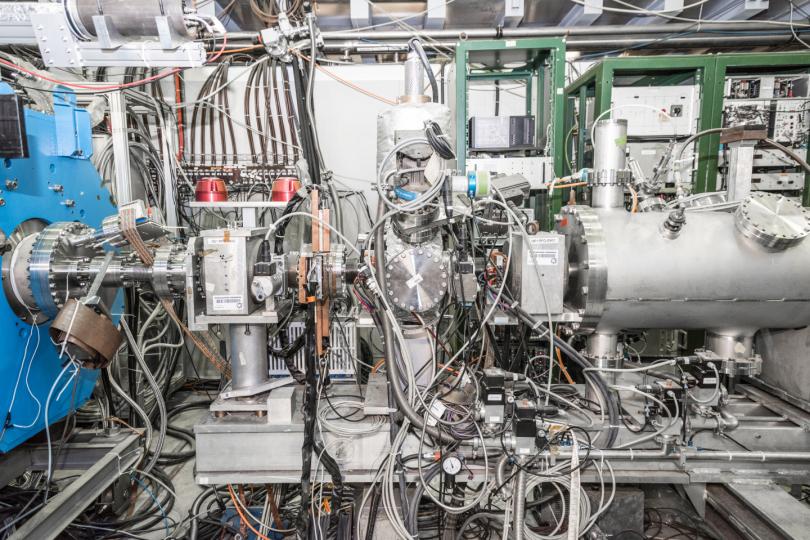 The ASACUSA experiment at CERN has reported new precision measurement of the mass of the antiproton relative to that of the electron.

One of the biggest unanswered questions of cosmology is — why does anything exist at all? In other words, where is all the antimatter that was created along with matter in the Big Bang 13.8 billion years ago? If the Big Bang did create matter and antimatter in equal quantities — something that our current theoretical models tell us happened, why does only matter now remain? Why isn’t the present-day universe a wasteland of residual energy, given that matter and antimatter particles get annihilated when they come in contact? Scientists believe that there must be a fundamental difference between matter and antimatter — one that gave the former an edge over the latter in the race for survival. Either significantly more matter was created by the Big Bang, or there is an as-of-yet-undiscovered asymmetry between matter particles and their antimatter counterparts. That is why scientists have been hunting for violations of what is known as charge-parity symmetry — a central tenet of the Standard Model of particle physics, which states that the laws of physics remain unchanged even if a particle is replaced with its antiparticle, which has the opposite charge, and even if its spatial coordinates are inverted. One way to go about it is to compare the mass of particles and antiparticles with ever-increasing precision, as even minute differences in this quantity would force a drastic revision of our understanding of the properties of space-time. On Friday, in a paper published in the journal Science, researchers associated with the ASACUSA, or the Atomic Spectroscopy And Collisions Using Slow Antiprotons, collaboration at the European Organization for Nuclear Research (CERN) reported a new precision measurement of the mass of the antiproton — the antimatter equivalent of a proton — relative to that of the electron. “The measurement of the transition frequency has been improved by a factor of 1.4 to 10 compared with previous experiments. Experiments were conducted from 2010 to 2014, with about 2 billion atoms, corresponding to roughly 17 femtograms of antiprotonic helium,” CERN said in a statement. What is unique about this experiment is the method used to make the mass measurement. Normally, measuring the mass of antiparticles involves trapping them for long periods using magnetic devices. The technique employed by CERN researchers, however, involved the creation of “hybrid” atoms made up of a mix of matter and antimatter — in this case, antiprotonic helium atoms composed of an antiproton and an electron orbiting a helium nucleus. “They are made by mixing antiprotons with helium gas. In this mixture, about 3 percent of the antiprotons replace one of the two electrons of the helium atom,” CERN said in the statement. “In antiprotonic helium, the antiproton is in orbit around the helium nucleus, and protected by the electron cloud that surrounds the whole atom, making antiprotonic helium stable enough for precision measurements.” The researchers were able to further enhance the precision of their measurements by cooling down the antiprotonic helium atoms by suspending them in a very cold helium buffer gas, which brought down their temperatures close to absolute zero. Doing so reduced the microscopic motion of the atoms — something that had been a significant source of uncertainty in previous measurements. “The ASACUSA collaboration is confident that it will be able to further improve the precision of antiproton’s mass by using two laser beams,” CERN said. “In the near future, the start of the ELENA facility at CERN will also allow the precision of such measurements to be improved.”