A 65-year-old Russian adventurer was battling sleep deprivation, freezing temperatures and ice in his oxygen mask but was ahead of schedule for his record attempt to fly solo in a balloon around the world nonstop, his son said Wednesday. Fedor Konyukhov has drifted more than halfway around the world since he lifted off from Northam in Western Australia state on July 12 in a carbon box 2 meters (6 feet 7 inches) high, 2 meters (6 feet 7 inches) long and 1.8 meters (5 feet 11 inches) wide suspended from a 56-meter (184-foot) -tall helium and hot-air balloon. Oscar Konyukhov, who heads the support team based at Northam, said his father was on track to return to Earth somewhere in Australia on Sunday — 12 days after he started. The previous record of 13 days and eight hours was set by American adventurer Steve Fossett in 2002. “Mentally, he’s very strong,” said Oscar, who usually communicates with his father by text message. “It’s a boost to morale to be more than halfway and he’s looking forward to seeing the Australian coast.” For all their meticulous planning ahead of the flight, mistakes have become apparent. The heating system is inadequate with temperatures in the gondola ranging from 5 degrees Celsius (41 Fahrenheit) during the day to below freezing at night. Flying at altitudes between 6,000 and 9,000 meters (20,000 and 30,000 feet), Fedor continually needs to use bottled oxygen. Because he only took two masks — one with a short hose for use inside the gondola and the other with a long hose for use outside — Fedor regularly needs to clear the mask of ice and condensation. “We should’ve given him at least two or three sets so if one is full of ice, then throw it away and get a brand new one,” the son said. “It’s a minor thing, but it’s also a big thing because there’s nothing small in this project.” Fedor aimed to get four hours sleep a day in naps of 30 or 40 minutes between hours of checking and maintaining equipment and instruments. His direction and altitude were constantly monitored by his ground crew, who look for signs that he might have overslept and are ready to make contact by satellite phone or radio. “Sometimes when we see that he’s descending and we don’t know why, we call him and ask: What’s going on?” Oscar said.
Oscar estimated the 1.6-metric ton (1.8-ton) balloon had flown 20,000 kilometers (12,500 miles) at speeds up to 250 kilometers (155 miles) per hour by Wednesday and had 13,000 kilometers (8,000 miles) to go. The balloon was expected to reach South Africa on Thursday before the final leg east across the Indian Ocean. The pilot would attempt to navigate around a low pressure system over the Indian Ocean, which made the duration of the crossing difficult to predict, Oscar said. “The last leg across the Indian Ocean will be very difficult,” Oscar said, because of the weather and challenges in steering a balloon at the mercy of winds toward Australia. 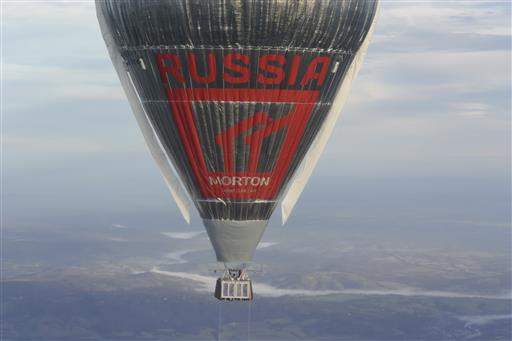