The world’s known stores of helium have just ballooned. Scientists have uncovered a vast reservoir of more than a trillion liters (260 million gallons) of the gas. It sits beneath Tanzania in East Africa. That’s enough helium to satisfy the world’s needs for about seven years. Researchers announced the find June 28 at the Goldschmidt Conference in Yokohama, Japan. Helium is used for more than just making balloons float and voices sound squeaky. This gas has become essential for scientific research. It also is a critical component of the cooling systems in magnetic resonance imaging (MRI) scanners used in medicine. The helium for all of these uses does not come from the atmosphere, though. It comes from the ground. The element accumulates underground during the radioactive decay of certain elements, such as uranium. That helium initially is trapped in rocks. It can escape when surrounding rock melts during volcanic activity. Once it gets to the surface, though, helium easily escapes Earth’s atmosphere. And once it does that, it is gone forever. That is one reason the gas is so rare on Earth. Previously known helium reserves were discovered by chance during efforts to find oil and gas. Because helium was important for space exploration and the military, the U.S. government for decades has been collecting and storing the gas. This stockpile is called the Federal Helium Reserve. It has become the world’s largest source of helium. But the reserve was going to run dry within the next few years. That led to fears there may be a global helium shortage. That could cause problems in the fields of medicine and science. This new discovery may help to set those fears aside. Diveena Danabalan is a geologist at Durham University in England. She and her colleagues found the new helium reserve. They applied geologic know-how to their helium hunt. They used information about how helium accumulates in the Earth. They also imaged underground formations that trap gas. That led the team to discover five spots in Tanzania where water and helium-rich gas bubble to the surface from underground reservoirs. The researchers predicted that they will be able to find more helium reservoirs in the future. That should help to meet the world’s helium needs. 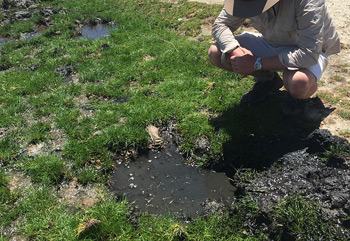 At this spot near Lake Eyasi in Tanzania, helium-rich gas bubbles to the surface in a natural water seep.