Space Mining Will Take A Giant Leap in 2016

This article was taken from The WIRED World in 2016 — our fourth annual trends report, a standalone magazine in which our network of expert writers and influencers predicts what’s coming next. Be the first to read WIRED’s articles in print before they’re posted online, and get your hands on loads of additional content by subscribing online.

Most of us see the Moon as just a small circle in the sky. Naveen Jain, co-founder and chairman of space-mining startup Moon Express, sees quadrillions of dollars worth of valuable minerals, more than a million tonnes of fusion fuel and some prime business estate — and he wants to own it. “So many resources which are extremely rare on Earth are abundant on the Moon,” Jain says. “We shouldn’t only be mining the Earth, we should be thinking of the Moon as our eighth continent.”Last December, Moon Express became the first private company to successfully build and test a Moon-capable robotic lander — the MX-1 — here on Earth. By 2016, it plans to land on the Moon itself in a bid to claim the $20 million (£13m) Google Lunar XPRIZE for the first private lander to successfully travel 500 metres along the surface and transmit high-definition imagery back home. In October, in partnership with Nasa, it was on track to launch a shuttle to retrieve experiments from the International Space Station. “On return it will land with ten-metre accuracy,” Jain says. “You could land it in your backyard. This is the same kind of system we can use to bring back cargo from the Moon.” Cargo such as helium-3, an ideal candidate fuel for nuclear fusion. Formed in the Sun and carried through space on solar winds, helium-3 is extremely rare on Earth, thanks to the protection of the planet’s magnetic field. The Moon, however, has no such shield and is estimated to have absorbed enough helium-3 to meet global energy demand for more than a millennia. “We know it’s there in tremendous quantities, from all the surveys and lunar meteorite analyses of the past 50 years,” Jain says. “Even a relatively small quantity could power this planet for generations.” Others are already looking further afield. Virginia-based Deep Space Industries and Washington-based Planetary Resources have both set their sights on near-Earth asteroids, the original source of much of the Earth and Moon’s precious metals. “Space travel isn’t about distance,” explains Planetary Resources’ president and chief engineer, Chris Lewicki, who was also former flight director for Nasa’s twin Mars Rover missions. “Everything is measured in terms of the amount of rocket fuel that you need. Asteroids have no gravity, so going there and bringing stuff back requires as little fuel as docking with a space station. There are almost 4,000 asteroids that we know of which are energetically closer to us than the surface of the Moon.” In June 2013, Planetary Resources, whose investors include Google co-founder and CEO Larry Page and Virgin Group founder Richard Branson, launched a Kickstarter, raising $1.5m towards the funding of their first asteroid-prospecting craft. The 22cm ARKYD optical telescope is set for launch into Earth orbit by the end of 2016. Because asteroids are mostly the same material throughout, analysis of ARKYD imagery will give the company indication of which ones would be candidates for mining, Lewicki explains. “We can use optical spectra and the light reflected off these asteroids to tell the difference between metallic asteroids, carbonaceous asteroids with water and those that are just boring rock.” 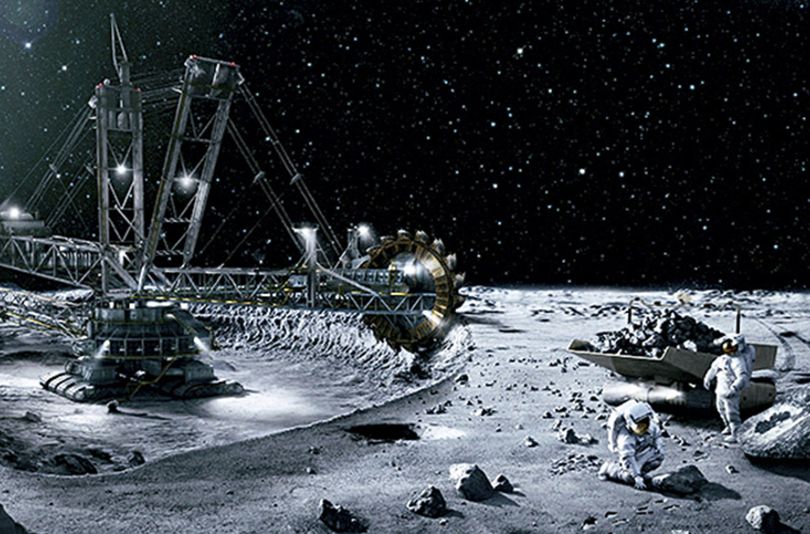 As with the Moon, a major draw to asteroid mining is the abundance of rare Earth metals found throughout space — in particular, the platinum group, used not only in jewellery but in the manufacture of everything from catalytic converters and smartphones to cancer treatments. Access to an abundance of these, Lewicki suggests, could have a similar impact on technological development as the discovery of how to extract aluminium from the Earth’s crust. Yet the high value of the most important in-space resources comes not from their rarity on Earth, but from their presence off it — specifically outside of the planet’s gravitational field. “The first resource we’re interested in is plain old water,” explains Lewicki. “In space, it’s never quite where you need it. At the moment it costs us about £60 million per tonne just to get it out there.” On the Moon, she says, water will provide the oxygen needed to begin the expansion of human habitation into space. Its presence throughout the universe will essentially fuel its exploration. “H2O contains the elements of the same rocket fuel that powered all 135 space shuttle launches,” explains Lewicki. “By capturing water from asteroids and bringing it back to Earth orbit, we’ll be able to refuel all abandoned satellites in space. And we can serve as refuelling stations around the Solar System for wherever human beings want to take their activities.” Not only fuel stations, but factories. Iron, nickel and cobalt, the base metals needed for spacecraft manufacture, are also abundant throughout space, where zero or low gravity will allow for the creation of entirely new chemical compounds and alloys that would be impossible under the Earth’s pull. “There are pharmaceutical drugs, for example, that could only be developed in space,” Jain says. “The chemicals will crystallise very differently in something like Moon gravity.” Future spacecraft, 3D-printed with in-space resources, will never need to undergo the violent forces needed to escape planetary gravity, allowing for constructions of currently inconceivable size and delicacy. “This is going to create the spacecraft envisioned by science fiction,” Lewicki says. “Engineers will be working with an entirely different set of constraints than they have today.” Given that humanity first landed on the Moon 47 years ago, why is the exploitation of space’s bountiful resources only just getting started? The answer, according to Jain, comes down to increasingly powerful off-the-shelf technologies, making space a much more appealing investment proposition to private enterprise. “Four years ago, the LiDAR used to measure our location and descent would have cost us $1.5 million; three months ago we bought it for $1,500. Space-certified cameras used to cost hundreds of thousands. We’re using modified GoPros,” he says. “Earlier missions to the Moon cost billions of dollars. Now we can do that for $50 million, and costs will continue to come down.”

So when can we expect the first space platinum back here on Earth?

“We should be bringing back lunar samples in the second or third mission,” says Jain, who estimates a further eight to ten years till the establishment of the first producing Moon mine. Planetary Resources is aiming to send a propulsion-enabled telescope to conduct closer examination of promising asteroid candidates by 2018. If these are of the right kind, containing water or useful metals, then the first extraction and sample return is targeted for the early 2020s. “We often over-predict what will happen in a year’s time, but we almost always under-predict what will happen in ten years,” Lewicki says. “Most people are thinking 50 years out, but if they have kids in school today, it’s quite possible that their first job could be in space mining.”