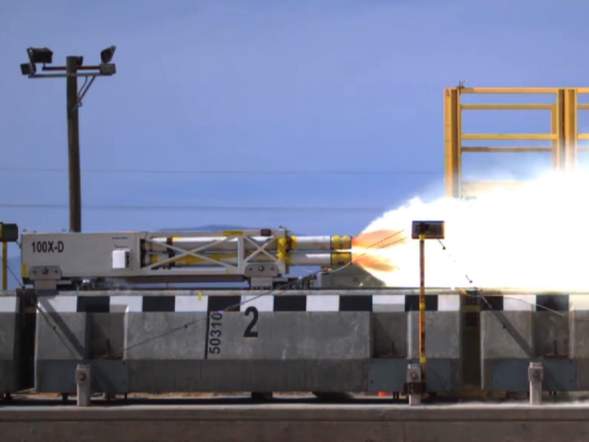 A rocket-powered sled which levitates using super-conducting magnets cooled with liquid helium hits 633mph on a test track. Blink and you’ll miss it. The US Air Force has smashed the world speed record for a magnetic levitation vehicle on a test track in New Mexico. Maglev vehicles levitate above the tracks, allowing them to move without touching the ground. The previous speed record was set by a maglev train in Japan which hit 375mph. But that has been eclipsed by the latest test which saw a rocket-powered sled hit 633mph. The sled levitates using super-conducting magnets cooled with liquid helium. Footage shows two soldiers checking the state of the track before entering a viewing booth nearby. Within a couple of seconds the sled’s rockets fire up, and it blasts along the track within a blink of an eye. The vehicle hit acceleration speeds of up to 280 metres per second. Shawn Morgenstern, commander of the 846th Test Squadron at Holloman Air Force Base, said: “What we plan to do after this test is refine the design of the sled itself. “We want to look at some lighter materials and continue to see what kind of capability we can get out of this system in terms of the speeds that we’re capable of going.” Video has just emerged of the record run, which took place on 4 March. The test track lies just east of the White Sands Missile Range, where the first atomic bomb was detonated.