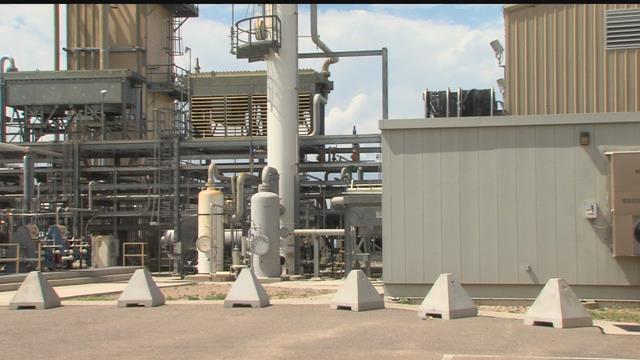 Amarillo once was known as the unofficial Helium Capital of America. There’s still a good bit of the gas stored underground, but the operation no longer sells helium to the federal government. It sells it instead to private interests and it will do so for the next five years. Then it will stop. As Robert Jolley, head of the U.S. Bureau of Land Management office in downtown Amarillo — which oversees the storage and shipment of the gas — “The clock is ticking.” Jolley, whose official title at BLM is field manager of the Amarillo office, said the operation that once employed more than 600 folks at six helium plants in four states is now down to 66 employees. The other plants have closed. Only the Amarillo-area plant remains operational. Where did everyone go? They all went elsewhere throughout the BLM network after Congress enacted the Helium Privatization Act of 1996. The act mandated that BLM must sell the helium it had stored in what’s called a “bush dome” outside of Amarillo. It sold the helium from 2003 until 2013 to private industries interested in using the gas for various applications, according to Jolley. He said today the major consumers of the helium are four oil refineries in Oklahoma and Kansas, who purchase the gas, which is shipped to their operations along pipelines originating at the Cliffside storage plant. Jolley said BLM plans to sell the helium until September 2021 “or until we have 3 billion cubic feet of helium in storage.” If the agency reaches the 3 billion CF level before the deadline, then the sales will stop, Jolley said. Jolley explained that the 3 billion CF volume then will be available for federal uses if the government decides to use it. When the Helium Privatization Act took effect, the BLM had more than 34 billion cubic feet of helium in storage. It then has sold about 22 billion CF since then to private consumers. Jolley said the agency these days returns about $125 million to the federal Treasury annually from sale of the helium. But he added that the amount of money is declining as the helium inventory is drawn down. Joe Peterson, an assistant field manager, noted that “Private firms are looking for new helium. If they find it on public land, then they come to us.” Congress enacted the Helium Privatization Act, Jolley said, because “the federal government had more helium than it could use.” Sam Burton, an assistant field manager, added that the government “also was interested in paying down the federal debt.” The plant was turning a “profit” for the federal government, although Burton insisted that the feds “don’t like to use the term ‘profit.’ Instead we call it ‘funds in excess of operating expenses.'” Jolley, Peterson and Burton all recalled when President Bill Clinton, during his 1995 State of the Union speech to a joint session of Congress, singled out the Amarillo helium operation as an “example of wasteful government spending.” The men all took exception to that description, contending that the helium operation returned money to the Treasury every year. Jolley’s predecessor as field manager is Dale Bippus, an Amarillo resident who spent 39 years working for the BLM and the Bureau of Mines before retiring in 1994. Bippus, who oversaw operations at several helium plants throughout the region, talked about the time when the federal government required huge amounts of helium. “During World War I, the government launched what it called ‘barrage balloons,’ which were tethered to the ground and kept airplanes from bombing targets,” Bippus said. The plant was “getting ready to ship the helium, but the war ended in 1918,” he said. World War II came along and helium-powered dirigibles were deployed “to escort ships” sailing across the Atlantic between North America and Europe, Bippus said. “They prevented the sinking of ships” by providing aerial surveillance, he said. The helium operation was originally run by the Bureau of Mines, Bippus said. The Bureau of Mines handed it over to the BLM. During all that time, the space program came into being and the space agency NASA used helium to fire rockets off the pad and into space. “NASA became our biggest user of helium,” Bippus said, adding that the agency consumed 30 percent of the helium produced. Helium is selling now at about $104 per 1,000 cubic feet, according to Burton. Amarillo is uniquely capable of storing the helium because of the nature of the rock that sits below the surface, Jolley said. He explained that the helium is pumped into porous rock layered beneath Earth’s surface. That porous material extends to a depth of about 3,000 feet. When the agency needs to ship the helium from the “bush dome,” it is able to tap into the rock and then move the gas along pipelines to companies that are purchasing it. It’s not that the federal government has run out of uses for the helium, Jolley indicated. The Border Patrol flies blimps along our nation’s southern border to look for illegal immigrants entering the country; the Defense and Energy departments use helium to run their telescopic equipment; and NASA is still using it to launch rockets, according to Jolley. The BLM is looking forward to a ceremony that will occur in 2018 at the Discovery Center, when officials will open a time capsule that was planted in 1968 to celebrate the 100 years since the discovery of helium in 1868. The time capsule will be opened to mark 50 years since it was put into the ground. What happens when the clock runs out on the helium operation? “The last tick of the clock occurs on Sept. 30, 2021,” Jolley said, “unless the federal government decides to renew it.”