This Periodic Table Of Endangered Elements Is Fascinating

We’re all familiar with the periodic table, but the majority of non-chemists probably aren’t familiar with the everyday uses of some of the many elements it contains. Some elements that many haven’t heard of find uses in technologies or applications we take for granted – but the supplies of these elements on Earth are not infinite. Today´s graphic, in a collaboration with the American Chemical Society’s Green Chemistry Institute, looks at some of the endangered elements in the periodic table, and why we might miss them when they’re gone. 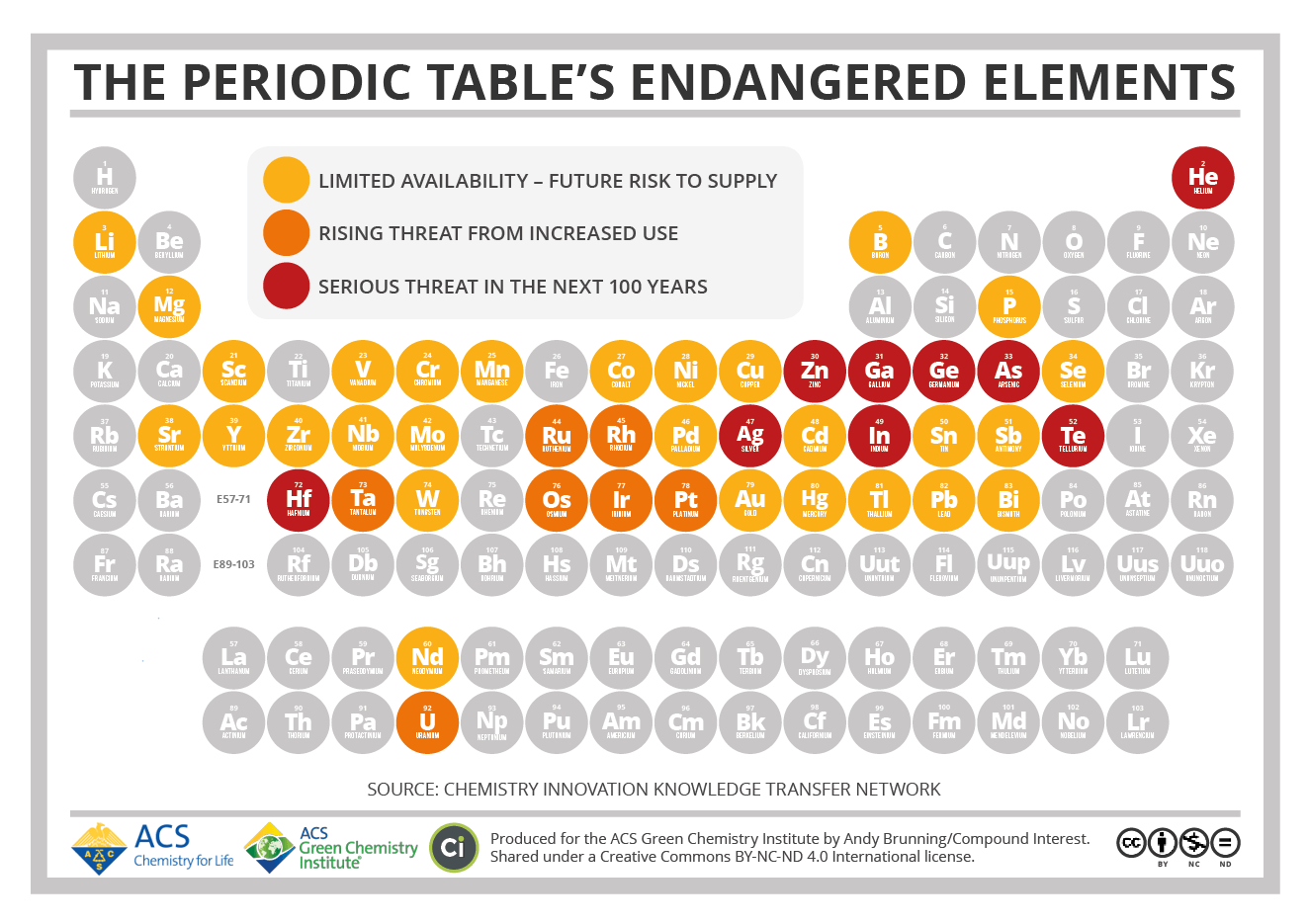 In total, the graphic shows 44 elements whose supply is at risk. For some, the risk is more serious than for others – but there are 9 elements shown in this table for which there is concern that there is a serious threat to their supply within the next 100 years, and a further 7 for which there is a rising threat due to increased use.Here, we’ll take a look at some of these at-risk elements: their uses, why their supply is under threat, and what can be done to tackle this problem. Before looking at particular elements, it’s also worth noting what we mean when we’re saying an element is ‘endangered’. We aren’t saying that that element will disappear from Earth completely, but that there will come a point when supply will be dwarfed by demand, or we will reach the point where it no longer becomes economically viable to extract or use a particular element, and alternatives will have to be sought. As we’ll see, there are plenty of applications where this could be problematic.

Helium, being the second most abundant element in the universe, might seem an odd element to be kicking off this list of endangered elements with.The light gas has a range of uses on Earth, from helium-filled party balloons, to supercooling magnets to very low temperatures in MRI machines. The issue is that it’s so light, it’s able to escape the Earth’s atmosphere with ease, meaning the amount of helium on Earth is constantly being depleted. The US controls the world’s largest stock of helium, the US National Helium reserve, but despite the future likely scarcity of helium, the reserves have been being sold off at comparatively low prices. Some estimates have claimed that we could have as little as 25 years of helium remaining, based on current rates of use. There are some measures that we could take to extend this figure. For instance, in some uses, helium can be recycled. However, at present, the low price of helium means that this isn’t cost-effective, and so there’s little incentive – what’s required for this to be worthwhile is for the price of helium to rise further. What might also help is facilities that are being developed to capture helium during the production of natural gas.

If you’re reading this on a touchscreen phone or tablet, the very device you’re using contains indium, in the form of indium tin oxide. This compound is a vital component of the touchscreen, used in a transparent film that conducts electricity. In fact 45% of all indium extracted has a use involving indium tin oxide. The problem with indium is that it doesn’t occur at high enough concentrations in ores to be profitably extracted at current prices. Instead, the bulk of the supply comes from the extraction of zinc, as it is also a by-product of this process. It also occurs in low concentrations in lead and tin ores. The amount of indium present in a particular device is actually rather small, often only as much as a few hundred milligrams or less. This means that work is needed in order to work out an efficient way of recovering the indium from unwanted devices. The process used to apply the indium tin oxide films is also quite inefficient, so another way of extending our viable indium supplies could be to refine this process further. Yet another alternative is to do away with the indium tin oxide film altogether, and use another material as a substitute. Graphene has seen limited use for this purpose in a small number of smartphones, though it remains to be seen whether this will be widely adopted. At this point, it’s worth noting that a number of the other elements highlighted here are also at risk of their demand outstripping supply due to their usage in electronic devices, or in their manufacture. These include gallium, silver, germanium and arsenic.

A number of the endangered elements find major uses as catalysts. This can be in the laboratory, catalysing chemical reactions in research, or in the catalytic converters found in cars to help reduce the polluting gases produced by car engines. Two such elements used for this purpose that are also present on our endangered list are palladium and rhodium, and another metal, platinum, was previously used before the phase-out of leaded petrol. As the supplies of these metals have struggled to keep up with demand, so their prices have risen, and catalytic converter designs have tried to adapt by including as little of them as possible. Currently, there still aren’t any good alternatives to the platinum-group metals when it comes to removing carbon monoxide, hydrocarbons and nitrogen oxides from exhaust fumes. Of course, hybrid vehicles and electric cars are increasing in popularity, though there is still a way to go before these can lessen demand for these metals in catalytic converters.

The rare earth elements are those in the top row of the two removed rows at the foot of the periodic table. Their name is actually something of a misnomer, as these metals aren’t really particularly rare. Though the only element highlighted in this particular table, using the ACS Green Chemistry Institute’s sources, is neodymium, other sources also include the majority of the rare earth elements in their lists of those for which there is concern about future supply. The rare earth elements have a range of uses in electronic devices. Neodymium, highlighted in this table, is used to make small but powerful magnets – it’s likely that any headphones you own utilise them, and they’re probably present in your computer’s hard drive too. Another element commonly used in rare earth magnets is dysprosium. The issue with the rare earth elements is not their lack of abundance, but rather isolating them. They tend to occur together, and separating them from each other is made difficult by the fact that they all have very similar chemical properties. They are also only found in particular regions in the Earth’s crust, meaning that some nations, particularly China, have a large monopoly over the world’s supply. The demand for rare earth elements is predicted to be fast outpacing the supply, and it’s a problem that’s yet to be solved. As well as coming up with viable methods for recycling these metals, another suggestion is coming to something of a compromise. Particularly, in the case of magnets, it’s been suggested that magnets fashioned from more abundant elements that actually perform worse than rare earth magnets could be developed, as long as they provide the required characteristics.

Hafnium, for non-chemists, is probably one of those elements you weren’t even aware existed. However, it has a number of important uses, including in superalloys used in jet engines, and as control rods in some nuclear reactors.It’s commonly found in combination with the metal above it in the periodic table, zirconium, and in fact is currently only produced as a byproduct of refining zirconium, which also has nuclear applications. With demand increasing as the nuclear industry expands, it’s likely that supply will be outpaced. This table was produced for the American Chemical Society’s Green Chemistry Institute.