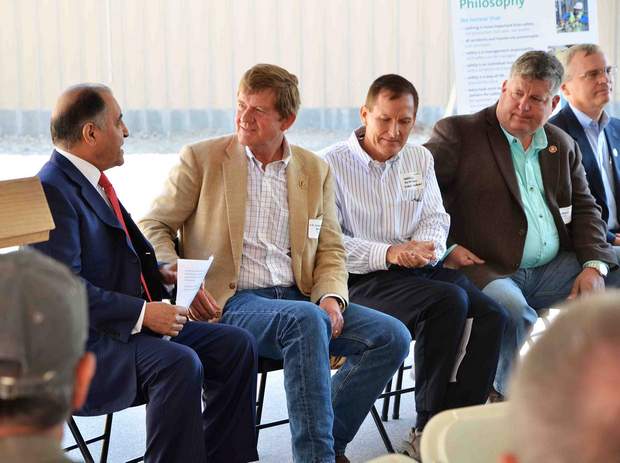 U.S. Rep. Scott Tipton chats with Air Products CEO Seifi Ghasemi during the dedication Wednesday at the Doe Canyon Helium Plant. To the right of Tipton is Darrell Ricketson, of Kinder Morgan, and Robert Jolley, from the BLM.

Scientists and balloon-enthusiasts rejoice: A $134 million helium plant in Cahone, three years in the making, celebrated its first week of production at a dedication ceremony this week. Operator of the plant, Air Products — an industrial gases company based in Lehigh Valley, Penn. — heralded its Doe Canyon helium production plant as the first in the world to extract the vital element from a gas stream composed primarily of CO2. Helium is one of the most abundant elements in the world, but because it’s so light, it escapes into the atmosphere quickly. After Kinder Morgan discovered helium in the CO2 it was extracting from Doe Canyon, the two companies began collaborating on how to recover some of it and help meet the rapidly increasing worldwide demand, officials said. “This is not just another liquid helium plant. We’re using cutting-edge technology to extract and produce helium that would have otherwise been lost,” said Corning Painter, Air Products’ executive vice president and general manager of industrial gases. Air Products extracts the helium before Kinder Morgan ships its CO2 to the Permian Basin shale play in West Texas for enhanced oil recovery. The helium extracted then gets liquified at the plant and trucked to Air Products’ customers. While most recognize the role helium plays in inflating balloons, the element is critical in the medical industry because it cools semiconductor magnets in MRIs. Fiber optic technology and computer chips are also manufactured with helium. Federal helium reserves are dwindling, and worldwide helium demand for technology uses is expected to increase. About 40 percent the helium produced in the United States today comes from the Bureau of Land Management (BLM) system in Texas; however, the BLM system is in decline, and eventually that storage supply will be depleted, officials said. The Cahone plant is expected to produce up to 230 million standard cubic feet of helium per year, replacing more than 15 percent of the current BLM reserve helium supply. U.S. Rep. Scott Tipton, who attended the dedication ceremony, praised the two companies’ ability to collaborate. “I applaud the collaboration between Kinder Morgan and Air Products, and the role they play in job creation, and I can’t overstate the opportunity this has created to create energy security.” Air Products chairman, president and CEO Seifi Ghasemi pledged to be good neighbors and good corporate citizens of Dolores County and Southwest Colorado. “As plant neighbors, I can assure you we will operate with the utmost safety,” said Ghasemi. “We’ve started a plant that is finding innovative solutions – recovering helium from a naturally occurring CO2 stream – something that’s never been done before.” The plant officially began production last week. It employs 14 people.