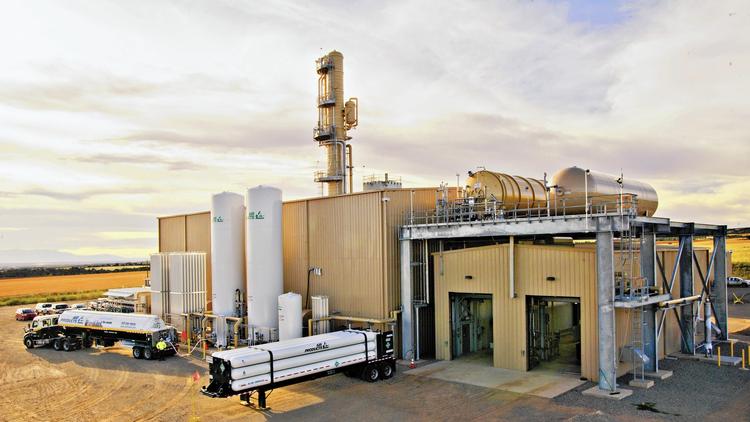 Air Products’ new helium production facility in Doe Canyon, Colo. It is the only plant in the world producing helium from a naturally occurring carbon dioxide stream.

Air Products held a grand opening Wednesday for its new Doe Canyon helium plant in southwestern Colorado. In a news release, Air Products said its plant is expected to produce up to 230 million standard cubic feet of helium per year, replacing more than 15 percent of the current federal reserve helium supply. The U.S. Bureau of Land Management produces much of the nation’s helium, but experts say the world demand for the gas is growing. Helium is also used in medicine for such things as MRI scans, electronics and many other applications, Air Products spokesman Art George said. The Colorado plant, which employs 14 and began operating in late June, is the only one of its kind in the world that extracts helium from carbon dioxide, George said. “We’re using cutting-edge technology to extract and produce helium that would have otherwise been lost,” said Corning Painter, Air Products’ executive vice president and general manager of its industrial gases segment. “Bringing the Doe Canyon helium plant on-stream is just one more step in a series of steps that we’ve taken in order to become the most reliable supplier of helium to our customers around the world.” Air Products, based in Trexlertown, says it has pioneered many of the helium extraction, production, distribution and storage technologies used in the industry today. It also says it is the largest helium producer in the world. The region’s No. 3 employer with 3,400 workers, Air Products employs about 20,000 people worldwide.