Helium Shortage Deflates Income For Some 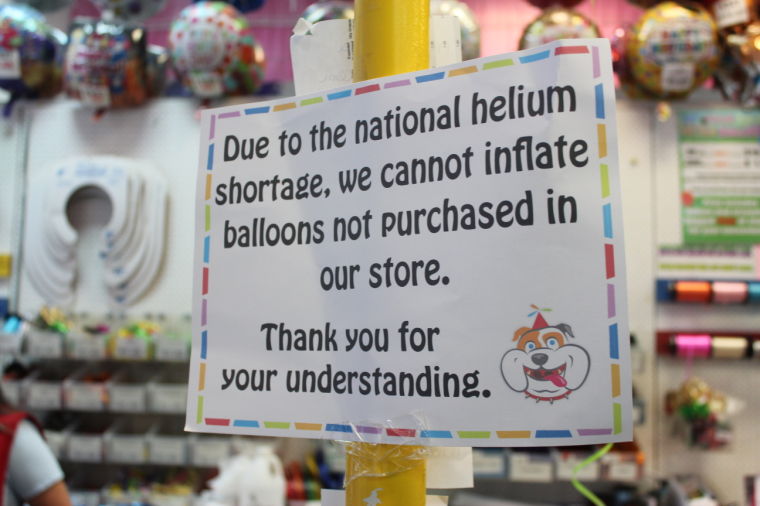 Helium is in short supply and businesses are feeling the crunch. “We’re losing $500 to $600 a week from balloon sales,” said Card & Party Factory Manager Trish Basham. Balloons are big business at Basham’s store, where sales of helium bring the most profit. But with suppliers doubling or tripling the usual cost of helium, shoppers are buying fewer balloons or opting out altogether. The price of a solid color balloon at Basham’s store has jumped from 79 cents to $1.29 in a matter of months, she said. “The biggest complaint is that we no longer blow up balloons that people don’t buy here,” Basham said. “You can find patterns online that we don’t sell in the store, but we don’t blow them up.” A sign on the store’s front door and near the helium tanks reminds customers of the scarcity, and has, for several months. Basham isn’t sure the signs will ever come down. Helium, a colorless, tasteless, odorless gas is used to inflate balloons for birthday parties and weddings, but also in the medical field to cool MRI machines, as well as in many electronics. About a dozen miles outside of Amarillo lies the nation’s only Federal Helium Reserve, where about a third of the world’s helium is found. Through the Helium Privatization Act of 1996, the federal government began trying to sell that supply and privatize all helium sales by 2015. While florists and party stores can come up with new ways to make balloon art, those in the medical field may not be so lucky. The Medical Imaging and Technology Alliance recently addressed the depleting supply of helium by addressing a letter to Congress, urging them to act on the Helium Stewardship Act of 1912, which would keep the reserve from closing its facility. “Failure to preserve our domestic helium supply will have reverberating effects for the U.S. medical imaging sector and the entire health care industry,” said Gail Rodriguez, executive director of MITA, in a recent statement. Local floral shops, A Little Ben’s and Patrick’s Cleburne Floral are also feeling effects of the shortage, though not to a great extent. Many of the balloons florists use don’t require helium and are attached to flower bouquets. John Patrick, who owns Patrick’s Cleburne Floral, said he’s paying more for helium at his shop, but hasn’t passed on the price hike to his customers. He said he uses about one tank of helium a month. “Some of the balloons are already expensive anyway,” he said, adding he can make do without helium. But Basham said her store doesn’t have a choice. A customer could once buy a package of 10 balloons for under $7, but now the smallest package available is $20. Sometimes, the store runs out of helium completely. “They say the price is just going to go up,” she said. “I’ve been here five years … it’s never been like this.”