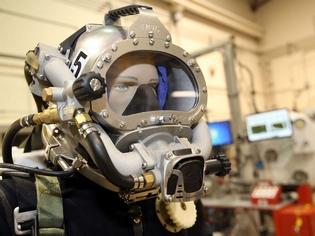 The initial response diving project prototype nicknamed “Eugene” is seen on Wednesday. The goal of the system is to expedite the deployment of Navy divers, boost safety and conserve helium.
John Camperman, diving and life support senior scientist with the Naval Surface Warfare Center Panama City, talks about the initial response diving project prototype nicknamed “Eugene” on Wednesday, July 29. Navy divers will be able to go a little deeper after work done at the Hydrospace Laboratory. Engineers there have been working on and off for two-and-a-half years on “Eugene,” a rapid response diving prototype. It is a life support system for Navy divers that will allow for faster mission times and increased safety. The prototype got its name from the middle name of Greg Eugene Holbrook, a senior engineer at NSWC PC who helped in testing. The Eugene system was modeled on a mannequin dressed in a diving suit and helmet Wednesday morning in the Hydrospace Laboratory. The aim for Eugene is to more than300 feet deep, with 600-foot dives planned as a future benchmark. From a design perspective, Eugene is 95 percent ready, said John Camperman, diving and life support senior scientist at Naval Surface Warfare Center in Panama City. Camperman was one of five core scientists at NSWC PC who worked on Eugene. As far as using Eugene in the field, the prototype is 80 percent ready, Camperman said. There will still be testing and certification by the Navy before it is put to official use. Divers use a mixture of oxygen, helium or nitrogen to breathe underwater, Camperman said. Eugene modified the Helmet and rebreather to save the amount of helium used. Helium typically is used because it does not have the side effects of other gases, Camperman said. But it has its own challenges because it is a non-renewable source of energy. “Helium is expensive and hard to come by,” he said. Camperman said Eugene supported and enhanced surface-supplied diving, with a focus on salvage missions. Surface-supplied diving uses a hose to supply a diver with air from a tank on the surface, according to Divers Academy International. “The point is to get human intervention underwater,” Camperman said. Robotic vehicles were used in salvage missions but were sometimes too slow for situations such as disabled submarines, casualties at sea and or fallen aircraft, he said. NSWC PC public affairs specialist Jacqui Barker said Eugene was also part of the initial response diving project to support faster recovery of objects in deep water. Camperman said he took Eugene to an exposition in Washington, D.C., in February to show off the prototype. At the end of August, Eugene will travel to Fort Lauderdale for a symposium where engineers will meet with medical experts to explain the improvements in the dive-support system. Gram Holmes, a mechanical engineer with NSWC PC who has worked on Eugene, said the project has been enjoyable. The design process had been good from the ground up, he said. “If it does get fielded, it’s a really big accomplishment for us,” Holmes said. Jacob Cornman, a NSWC PC mechanical engineer who also worked on Eugene, said the project has been a big learning experience. It tied in to the research he did for his master’s degree in mechanical engineering and gave him a chance to apply what he learned in school, Cornman said.